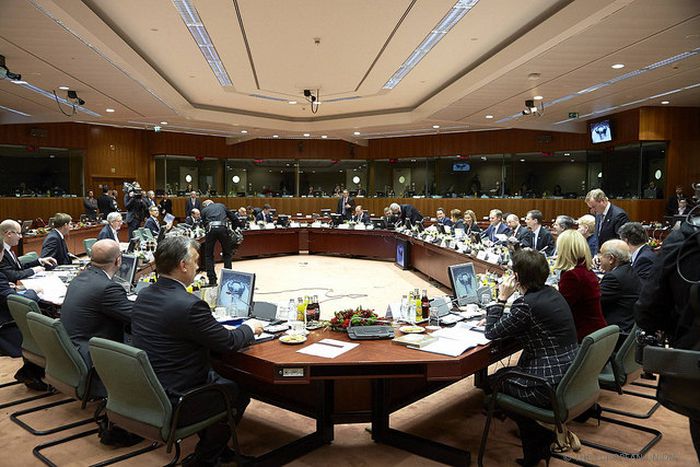 Crisis in Ukraine on the focus of the EU Summit

For the first time chaired by Donald Tusk, President of the European Council, the European Summit took place in Brussels, on the 18th of December. Ukraine and the investment plan were some of the topics approached by the European leaders.

A few days before Christmas, European leaders discussed the problems of the Union and ways of tackling it. Rather than decisions made, the meeting started a new cycle in European politics. As expected, EU leaders discussed topics such as the €315 billion package proposed by Juncker and the situation in Ukraine. European leaders have different opinions and views in how the EU should deal with Russia, however, all the Union is cohesive against Putin’s intervention in neighbor’s territory. No more sanctions against Russia were decided under the EU Summit.

“This is a good chance to brief the council. We need to support the reform agenda. It is time for the EU to make Ukraine a success. This requires work in Europe and Ukraine. We need to develop a sound strategy with Russia, like Donald Tusk said. We start tonight and I am ready to follow this up with the foreign ministers in January,” said the EU’s foreign policy chief Federica Mogherini during the Summit.

The situation in Ukraine is clearly a sensitive topic on the European agenda. However, more than outlining possible ways on how the EU should toughen up the sanctions against Russia, EU leaders and diplomats appeared to be willingness to follow the diplomatic way of solving this difficult situation, urging Russia to the benefits of ending the occupation in Crimea. “We should keep those sanctions in place until Russia changes its behavior and stops the aggression in Ukraine,” said British Prime Minister David Cameron. UK’s leader went further saying “the door is always open to Russia if it changes its behavior,” he added.

The new President of the Council, Donald Tusk, said that Russia is now a “strategic problem” for Europe and not Ukraine. Tusk stated that the biggest challenge for Europe now is Russia’s approximation not only to Ukraine but also to the EU.

On the German side, Chancellor Angela Merkel made it clear that the EU will not step back regarding Russia sanctions unless Putin reconsiders. Likewise Cameron’s statement, Merkel also reminded that the sanctions were imposed for specific reasons and, therefore, they can be lifted as soon as the reasons are no longer there.

Following the Minsk Protocol, an agreement to halt the war in the Donbass region of Ukraine and signed in September 2014 between the actors in this war, French President François Hollande and Chancellor Merkel want to see developments in the protocol, with the support from Russia. Moreover, Hollande has recognized that the sanctions against Putin are one of the reasons for the sudden economic and monetary crisis which has shaken Russia recently. The French leader believes this is the best way to regulate the problem as Putin is isolated in the international scene.

The EU has already barred imports from Crimea (unless they show a Ukrainian credential) as well as enacted limitations on individuals and some major companies in the region. One of the steps taken in account by the leaders is precisely whether to impose a total ban on European investment in Crimea. Russia was already banned from importing goods from the EU. As a reaction, Putin’s country is also not importing any goods from the EU. This represents a major threat for many farmers and for the EU in general.