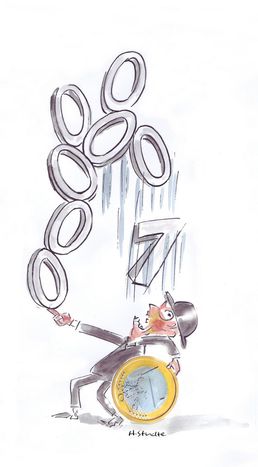 Credit crunch: a fistful of pounds and zlotys

‘It’s the financial crisis!’ We’re surrounded by numbers on all sides: it’s becoming a real obsession! Almost makes you wish you were a numismatist. Weekly plunge into - the world of currencies

No more rugby on TV, put away the poker case, the fun is over. It’s time for some number crunching! So, in this vein, we discover that the English currency is called the pound because it originally represented the amount corresponding to a pound in mass of pure silver. Some decades ago, English money was divided into shillings and pennies. The term 'shilling' comes from the Italian solidus, and penny from denarius. Imagine the price tags displaying the characters £ s d. Without too much stretch of the imagination, that’s pretty quickly read as LSD…

There’s a touch of prestige in the names carried by our European currencies. What decadence during the credit crunch! The Polish zloty, for example, literally means of gold, and the Romanian leu can be translated as lion. That lion could only but roar with dissatisfaction at the economic unease in front of it today. In Denmark, like in Norway or Sweden, royalty takes pole position, with a currency called the crown. However, this particular period isn’t too glorious… The prize for irony, however, goes to the euro (pronounced in Spanish

) and the hryvnia, the Ukranian currency. Both are decorated with two horizontal bars, symbols of stability. That really takes the biscuit!

First published on cafebabel on 18 February 2009