C.O.W. 牛: A pixelated patchwork of DJs coming to Europe

Pixelated cows, Gameboys and a lot of nostalgic memorabilia. This is what makes C.O.W. 牛 stick out like a sore thumb. That, and the fact that this collective of DJs from China and Germany have amplified the mystery they’ve built up around their 8-bit characters with the release of their second EP. We sat down with one of the four producers to see what really happens behind the scenes.

Everybody loves a good mystery project. Especially when the tracks make us want to know who the people behind the masks are. Like Daft Punk and Gorillaz, the members of C.O.W. 牛 hide behind unique characters, but in this case, they’re pixelated characters that hark back to a time when playing video game classics like Tetris or Pokémon Red forced us to use a bit more of our imaginations than the games we see on the shelves today. They’re one of the latest mystery projects to hit playlists in Europe, and with their second EP $hanghai Mone¥ having just come out, there will be plenty more imagination to go around.

I first heard about C.O.W. 牛 when I visited a friend in Vienna. He showed me their website cowcowcowcow.com — an interactive landing page completely done up with 8-bit cows and a link to their first EP. A mix of trap, auto-tune, vocals and electronic, their tracks made for the perfect dance party. But it wasn’t until later when I was back home in Munich and heard them on the Bayerischer Rundfunk radio that I immediately knew: this mystery project ain’t no small thing.

Officially, all that’s really known is that the project is a collaboration between musicians from China and Germany, and that when they’re not making music, they’re having fun goofing around with memes on Instagram or Facebook. We learned at the Agratamagatha music festival back in July that they were working on a new EP and that they were planning on shooting a new music video as a narrative follow-up to their first video.

We were invited to one of the video sets — a large bed surrounded by pink walls, plush toys and candy — and managed to sit down with one of the members of the project to get some insight into how it all began, and to talk about inter-dimensional portals and Euclidean geometry. 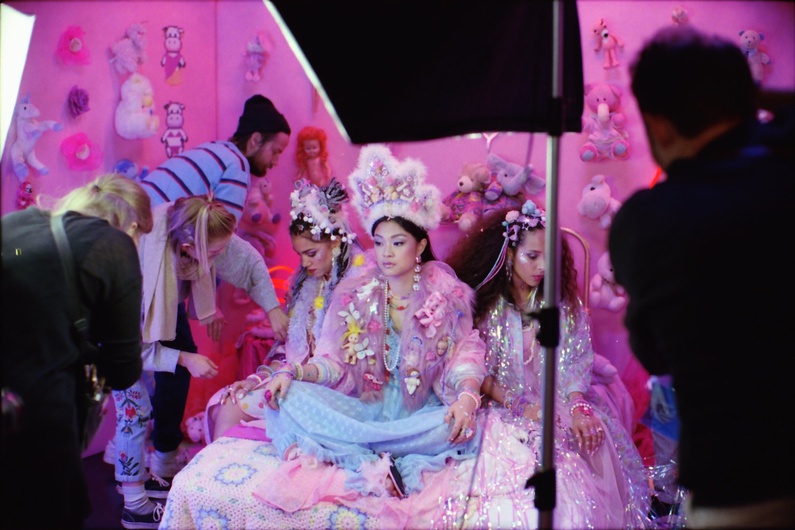 Cafébabel: There are four of you in the group. How did you guys meet, and how did C.O.W. 牛 emerge?

C.O.W. 牛: Actually, there’s one of us in the group, but we are made up of four parts. There are no borders between us. You can say there are four of us, but in a way there are also one hundred, just like how the universe is made up — there are lots of timelines and parallel universes, but just one entity. Like the Zen Buddhists say: everything is one and one is everything.

Cafébabel: Okay, well how did you four, or you many inter-dimensional beings, meet and how did C.O.W. 牛emerge?

C.O.W. 牛: Well that’s maybe like the story of the Big Bang. The human mind is just kind of not developed enough to comprehend how the universe just suddenly appeared out of a dot, you know? So that’s the same problem I have describing to you how C.O.W. 牛met.

C.O.W. 牛: Yes, it is a big part of my life, but my life is also a big part of Zen Buddhism. Making music is like breathing. It’s not just that you make music on purpose. You just do it because you’re alive and breathing.

Cafébabel: So what can you tell me about your pixel-art aesthetic and how does it play into your style of music?

C.O.W. 牛: The evolution of the Gameboy is a big part of my being. The aesthetics, and especially the beginning of the Gameboy. Tetris and Super Mario. Those things are really important to me, because I was always fascinated with this kind of world. Art and aesthetics can stand for themselves, but for me the interaction with the observer is much more interesting. And that’s what makes pixel art special; it requires the imagination of the observer for it to make sense, because there is so much less information in the artwork itself. 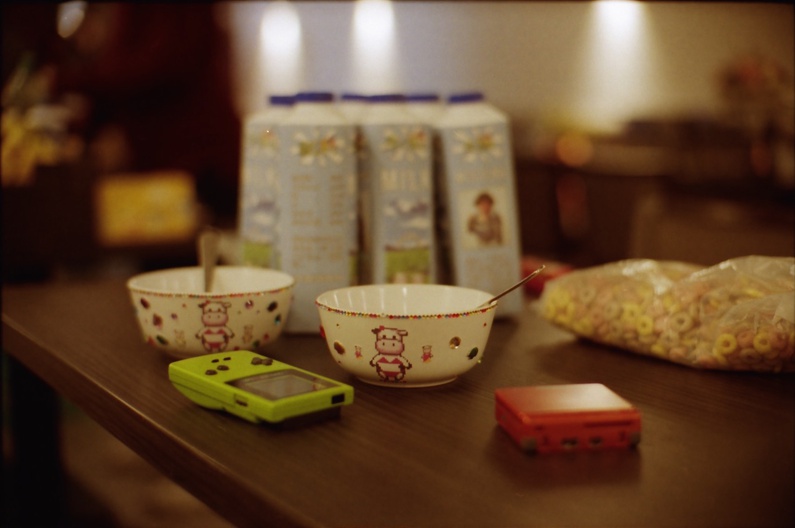 Cafébabel: You had your second EP $hanghai Mone¥playing just now while we were on set. Can you tell me a bit about the process behind producing it?

C.O.W. 牛: The process included meditating and watching our minds doing stuff. We just observed our thoughts without taking them seriously — we just watched them and then jotted down notes on our thoughts. And that’s how $hanghai Mone¥ came into being. We just watched our minds produce bullshit, and then we separated the “bull” from the “shit” in the compound word and then we had some content for C.O.W. 牛.

Cafébabel: Your second music video will be premiered along with the release of $hanghai Mone¥. The video seems to tell a story, just like the first music video for the song “White” in the first EP. How do the stories interrelate and what story were you trying to tell?

I think the real question is what the director’s view of the message behind the video is. It’s a tough question though, because his mind is very cryptic. But I love the symmetry of his mind and that it’s really not easy to comprehend the message or put it in words.

But to my mind the story is about greed. On the one hand, it’s about having something that someone else doesn’t have. On the other hand, it’s about desperately wanting something, but not being able to have it. And these two forces come together in the music video. Just like these two forces come together in the universe. There is everything and there is nothing. Yin and yang.

Cafébabel: You say the director has a really cryptic mind and that he was the architect behind these videos. Did C.O.W. 牛have any significant input on how those videos were produced?

C.O.W. 牛: Yeah of course, because the music came out of our music. Our music was the seed, the director was the soil and the money was the water. The fact that we produced this music video in Shanghai also was a big influence.

Cafébabel: But we’re on the set right now and we’re conducting our interview in Munich. What do you mean by that when you say that the video was produced in Shanghai?

C.O.W. 牛: This is the other thing about the mind. There are so many possibilities. You know, like there are portals. Are you familiar with the concept of a portal? The problem is that humans think in terms of Euclidean geometry, you know?

For example you have two dots or two position and the shortest connection is a straight line. But that’s not how the universe works. You don't need to follow the straight line, you just have follow your heart and bend the room so that the two dots, the two positions become one.

You think you’re in Munich, but you’re actually in Shanghai.

Cafébabel: I overheard that you recently signed with the label Compost Records, one of the most internationally renowned labels for lounge, downbeat and trip-hop. What can you tell me about how you guys connected and how the collaboration is going?

C.O.W. 牛: So you know the analogy I just made about the director being the soil, C.O.W. 牛being the seed and money being the water? Well the question is quite fitting, because for all the stuff we are doing we need proper fertilizer. That’s really important. And where do you get fertilizer? Compost [laughs].

Cafébabel: How did you find Compost Records and how did you wind up signing with them?

C.O.W. 牛: The Chinese market is really kind of single-minded. We have this huge pop-producing machinery, but everything is owned by the state; the labels and all that stuff. Which is kind of boring. And we had our success in China, but we wanted to move on and start doing some work that’s creative in a different way. So the Chinese part of us teamed up with the German part to collaborate.

We were trying to figure out who would be our partner in Germany and then we stumbled upon Compost Records, because they’re a big indie label, and they’re great because they really just amplify the ideas of their artists. They were the perfect partner for us, because we could do what we were already doing, but have access to a new network and somebody who just pumps it up.

Cafébabel: What are you goals for the future? Do you have any other projects in the works?

C.O.W. 牛: The good thing is that I think we’ve already achieved what we wanted to so far. Everything that happens now is just a perk. But we might work on a full album next.

Cafébabel: What have been some of your biggest influences?

C.O.W. 牛: The Gameboy, obviously a cow, and Kanye West.