The Swiss media have barely begun discussing it, but an initiative by the Christian Democratic People’s Party seeks to outlaw marriage equality.

Outside a café in Paris’s 5th arrondissement, Charlotte (22), drinks a strong espresso, "bien serré" – just the way she likes it. It has now been two years since she came to Paris to study Humanities. Why France? "I’m a lesbian," she replies, "and I wanted to live my life away from the watchful eye of my family." Even though her parents have accepted her sexuality, Charlotte – "like all young girls" – wanted to discover herself far away from home.

She remembers following the French debates on marriage equality in 2013: "The discussion was unprecedentedly ferocious," she recalls. In Switzerland in the same year, the Christian Democratic People’s Party (PDC) launched a popular initiative entitled: For Couples and the Family – No to Marriage Penalisation. It will go to vote on the 28th of February 2016. The initiative aims to end the imposition of higher taxes on some married and cohabiting couples – while also defining marriage within the constitution as a "union between a man and a woman".

Charlotte is incensed, and wonders if she will even return to her home country. "There is of course a taxation problem which needs to be dealt with," she admits, "But they want to stop gay, lesbian and trans people from marrying. It’s serious because once it's in the constitution, that’s bye-bye to my rights."

Married couples and couples in civil partnerships since 2007 referred to in this proposal have been wringing their hands over tax penalisation. In Switzerland, married and registered couples effectively pay more tax and get smaller pensions than couples who simply live together.

This is the main reason given by the PDC for launching the initiative, which would affect 80,000 couples, roughly 2% of the Swiss population. But to achieve their goal, the PDC also proposes defining marriage in the constitution as "the stable union between a man and a woman" – in effect excluding same-sex couples.

Little attention has been paid to the upcoming vote, in spite of warnings by LGBTI groups concerning the definition of marriage in the text of the initiative. But a poll conducted by gfs.bern for the Swiss Broadcasting Corporation and published on the 22nd of January showed that Swiss people support the PDC initiative as a whole.

The poll aroused the political conscience of Didier Bonny, member of the Pro Aequalitate organisation: "When you see the name of the initiative, of course you want to vote in favour. On closer examination, there’s a discrimination problem, and also a financial one because this initiative would be expensive for Switzerland."

Bonny also mentions this in a piece republished on the website of the 360 organisation – the initiative would cost 4 billion Swiss francs a year, of which 2 billion would come from community funds.

The results of the poll have the political class worried, to the point of bringing the right and the left together on the issue. Bonny explains: "The Socialist Party of Switzerland and the Greens support the LGBTI community, as do the Radical Liberal Party and the Liberal Greens, who are on the right of the spectrum."

They not only support the idea of individual rather than joint taxation, but they also want to reject discrimination towards same-sex couples. A joint press conference was set for the 27th of January to call for a "no" vote to the PDC initiative. If it is rejected, Bonny will be left wondering if "people voted for marriage equality, for individual taxation, or for both." But for this member of the Pro Aequalitate organisation, the most important thing is that citizens reject the initiative, no matter what their motivations are. 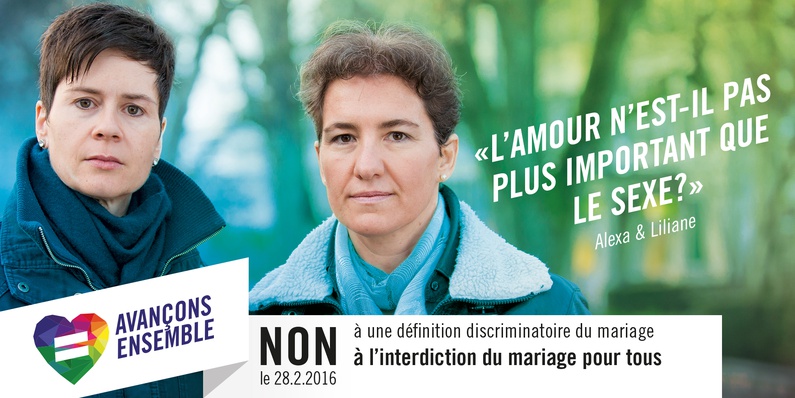 Pro Aequalitate was founded on the 19th of August 2015, with the goal of shedding light on all referenda that affect LGBTI issues – including informing the public on the content of the PDC initiative. The group has begun a "road tour" called Moving Forward Together – a "no" campaign against the PDC initiative.

If the PDC initiative is voted in, it will contradict article 8 of the Swiss Constitution, which forbids discrimination "based on lifestyle". Back in 2007, a civil partnership law called PEPS (offering more rights than the French equivalent, PACS, but not available to heterosexual couples) came into force following a 58% approval in a 2005 referendum. Switzerland became the first country in the world where the people formally recognised gay couples.

Even though the State Council's Commission on Judicial Affairs gave its approval on the 1st of September 2015 for extending civil marriage to gay couples, with seven votes to five (with one abstention), a vote in favour of the PDC initiative would push marriage equality out of reach for several years. The initiative, which has been condemned by Amnesty International, will be decided upon at the end of the month.

If Swiss citizens vote for the initiative, the country would become, as Bonny notes, "The first in Western Europe to adopt a law prohibiting equal marriage."