The 'Corridor 8' project will, according to the European Union, help to stabilise the troubled Balkans region 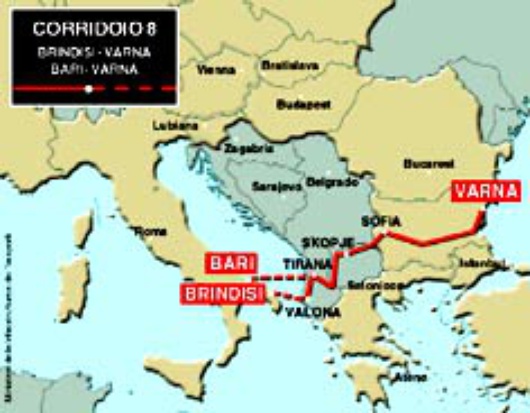 Once upon a time, the Appian Way connected Rome to Brindisi before heading east to the other side of the Adriatic. From the port of Durres in Albania, it eventually reached Greece. This route carried military and commercial rule from the Roman Empire to the East. After 20 centuries, the EU is putting its trust in the same direct routes to make its transport and telecommunications system run more smoothly. How? By launching the so-called Trans-European Transport Network, what is known in EU jargon as a ‘multimodal’ transport infrastructure.

Corridor 8 is one of ten 'Trans-European Corridors’ which plan to make the exchange of goods, people, oil and other energy supplies easier between the EU, the Balkan states (which look onto the Black and Caspian seas) and the states of central Asia. But it’s not just about making up for lost time and overcoming economic and commercial underdevelopment. For Europe, these Corridors will also improve stability in a region which has always been troubled.

Corridor 8 connects the Adriatic and Black seas. It sets out from the Italian ports of Bari and Brindisi and knocks on the door of Durres in Albania before carrying on through Tirana, Skopje and Sofia, finally arriving in the Black Sea ports of Burgas and Varna. This project has thrown up many difficulties in terms of feasibility. The stretch of road is to be almost entirely built from scratch and the proposals foresee two mountain passes, between Albania and Macedonia and Macedonia and Bulgaria, in areas which are difficult to access. It’s the same story for the railway line which is interrupted in two places. The current crumbling infrastructure in the area is causing costs to rocket and increasing the time needed to complete the project.

Optimism about a happy ending to the Corridor 8 saga is related to its strategic importance in terms of energy. The Corridor will make it possible for the Mediterranean to access the enormous energy reserves of the Caspian region. The notable presence of American investors who are interested in the project is no coincidence. Even the Italian Government has recently shown a renewed interest in the project, seeing the planned lengthening of the Corridor from Brindisi to Bari as an opportunity for economic development in the Mediterranean region.

Corridor 8 will launch Albania towards the Eastern European markets but that’s not all. The roads, railway lines, ports, logistics infrastructure and subsidiary services will guarantee enormous investment from the West. There is already interest in the management of the gas and water pipelines from the Caspian which will cast up on the Albanian coast. Besides being good business in the short term, the Corridor will guarantee structural economic advantages from the international presence and from improvement to the transport system and internal services. The enormous economic prospects from the Corridor and a new political landscape seem to bare testimony to the fact that history has decided to pass through Tirana once more.

There’s no doubt therefore that this is an historic opportunity for Albania. From the political point of view, it will allow the country to break free of isolation and take on new geopolitical significance in its strategic role as a bridge to Eastern Europe and Asia. The European Commission intends to tie the construction of the Corridors to a whole series of internal reforms in the states concerned. In concrete terms, the creation of the Corridors has been entrusted to the states geographically involved which have signed a Protocol agreement. The projects foresee both the restructuring of existing infrastructure and new construction, and will benefit from both public and private funding. The ability of the states involved to mobilise resources and guarantee political and administrative order is essential to attract investment.

In Albania, the time for reform and integration into the EU is approaching.