Recycling the 'ostalgia' fashion, a young Polish entrepreneur organises tours around the last ruins of the soviet era

The noise and smell announce their arrival: two trabants and an old fiat Polski 125 draw up to the university in the heart of Krakow. “Hello my name is Michal Ostrowski, but just call me crazy Mike”. The conductor of the Fiat Polski presents himself toth e group of the impatient tourists. “I am your guide today. Welcome to Krakow!’ 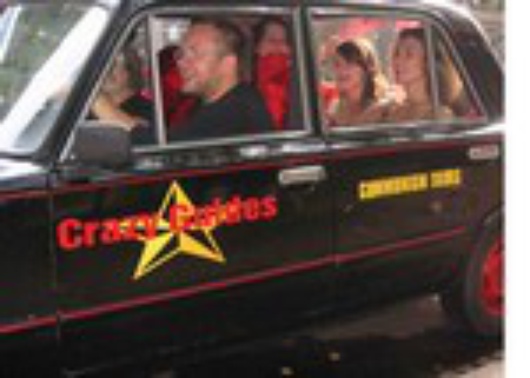 This afternoon; the participants of this ‘Funky Communism Tour’ are German students from Mayence, a language exchange. 'This is Cuba, he's a bit crazy too,' says Mike introducing one of the Tranbat drivers. A few seconds later, the jalopies from Eastern Europe screech off towards ‘Nowa Nuta’, the former showcase town of Polish communism, a few kilometres away.

On the road leading to the socialist experimental town, we discover great malls, Polish ‘hypermarkets, construction shops, multiplexes and an aquatic centre. All these buildings emerged relatively recently. To plunge back into communism, the German students must first leave the triumphant capitalism of the West behind them.

When he mentions tourists, Cuba thinks primarily of foreigners: two thirds of the participants on his tours are English and the others are Western Europeans or Americans. Until today almost no Polish tourists have signed up on his tours.

First stop on our tour of the former socialist model, the restaurant ‘Styowa (Style) honours its name and its decoration is heavily inspired by Eastern styles. Thick curtains and Bordeaux table clothes exude a certain nostalgic charm. Polish tunes fill the air, straight back from the 1970’s. With a coolness tinged with boredom, the waiters rush round to serve the dishes typical of Polish families. On the menu, we have herring covered by a generous layer of onions. To accompany this feast, vodka is required: ‘schnaps is typically Polish’, states Cuba.

After lunch, the group guide, Crazy Mike enters. Chatting to us, he launches into different stories and is full of anecdotes about the communist era. ‘It all started in 1949,’ he explains, ‘It was a real orgasm for architects because they had to build a city in merely 10 years’.

The tourists seem more interested in everyday life under the communist regime. ‘When we were children we used to collect cans of drink. Coca-cola, beer, anything, as long as they came from the West. We took them all because we didn’t have any here. In 1989, all these collector items landed in the dustbin because canned drinks became freely available here.’ Mike remembers also that ‘once I was offered a bounty bar, and far weeks I kept the packaging in a glass because I did not know what coconuts tasted like.”

The visits stops for a moment on ‘Plac Centralna’, today Ronald Reagan square, the former president of the USA who embodies political freedom for some Poles. Large avenues stem out from the square. The most imposing street leads straight up to a gigantic metallurgy complex ‘Nowa Huta’ which once employed 40,000 people. Previously called ‘Lenin avenue’, this artery is now christened Solidarniosc, the pioneering trade union of the 80’s . Insisting on the past, Mike says that this movement made ‘great progress’. ‘Today, it’s become a trade union, and I don’t like trade unions.’

That is not surprising: at 30, Mike displays all the characteristics of an ambuitous entrepreneur who calls his three employees ‘slaves’. He launched ‘Funky Communist tours’ two years ago with the help of two Americans who liked his idea. ‘They already knew Krakow and wanted to see something new,’ he remembers , ‘I took them to Nova Huta with my old Fiat and they loved it.’ With a starting capital of 1,000 dollars Mike bought his first two trabants. And since then the business has been good.

Last stop on the student tour: the legendary city of Warsaw where Mike rents a two bedrrom apartment. Time has stopped here : the furniture, the wallpaper, the images, the television, the filling cabinets, the kitchen, all is authentic and dates back to the 70’s. Images of the Christ, representations of Mary and portraits of John-Paul two hang on the walls. ‘The citizens of Nowa Huta were neer very political, but they were very religious ,’ states Mike.

In the flat, Mike’s private Museum, the tourists taste a mix of vodka, sausages and vinegar gherkins. To finish off, a few students buy busts of Lenin and fur caps as souvernirs. Four hours have elapsed and the cars return to Krakow. The students are dropped off at Rey nek, the main square in Krakow, which is teeming with life. The constrast with Ronald Reagan square in Nowa Huta is gripping, there only a few retirees and housewives scurried along the roads.