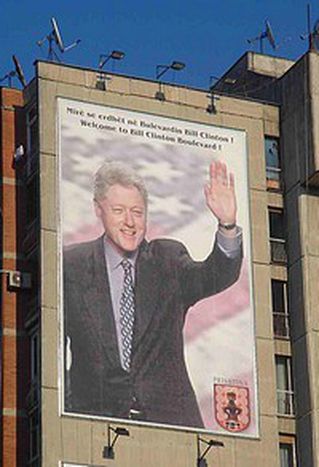 'Bill Clinton and God saved Kosovo': in the fight for independence from Serbia, Kosovan Albanians turn their hand to America for friendship

Bill Clinton welcomes everyone who has just come to the city from the direction of the airport. The eight metre high placard of the waving former

American president hangs on a twelve-storey building, looming high above the Bill Clinton Boulevard in Pristina, capital of a Kosovo seekingindependence from Serbia. A policeman who is directing traffic along the Boulevard is wearing a cap based on the style of police uniforms from the 1920s. On the fence opposite there's a placard from Thanksgiving last year, with ‘Thank you America’ emblazoned across it.

The fact that there can be such an unabashed American pride in a city with a large Muslim community, not forgetting this central road commemorating an ex-American president, is unheard of virtually anywhere else in the world. In May 1999 and during Bill Clinton’s presidency, the first NATO bomb landed on its Yugoslavian target. 78 days later the Kosovo War ended, and the dispossession of Kosovo-Albanians by Serbian troops was stopped. 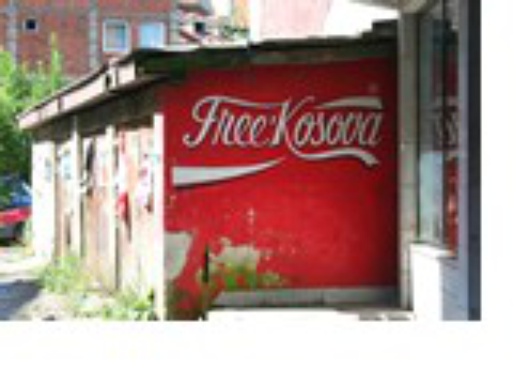 After the end of the war, several streets were quickly renamed after freedom fighters, politicians and authors barely known to Albanians. Even city taxi drivers had no idea where anywhere was! Instead of street names, distunguished places via landmarks such as mosques, banks or shops, for example the ‘California’ restaurant, the ‘Boston’ bakery or the ‘Hillary’ Boutique on Bill-Clinton Boulevard.

Weapons from the USA

‘The Albanians love us,’ says Robert Curtis, who has worked in Kosovo since 2001. ‘I can do no wrong here. If I drive too fast the police turn a blind eye - just because I’m American.' Curtis is the Dean at the American University in Kosovo, which since 2003 has offered courses in economics, management and other more questionable subjects.

‘Americans are our friends,’ says Faik Fazliu. ‘They were always on the side of the Albanians.’ At 22, Fazilu lost a leg in the last weeks of the war. Now he is chairman of the Association of War Veterans and War Invalids of the now disbanded Kosovan ‘Freedom Army’

UÇK. ‘Already by 1998, the UÇK were getting the majority of their weapons from the USA,’ remembers Fazliu. US-Albanians supported the UÇK as they completely legally bought weapons in large batches from the US. They ranged from assault rifles to grenade launchers. The weapons were created by Albanians in Kosovo. After they entered the war, the Americans set up training camps in Albania for UÇK fighters.

Since 1999, the US militia has been involved in the international KFOR-Mission in Kosovo. Their camp ‘Bondsteel’ in Ferizaj (Serbian: Urosevaæ) is the largest US military camp in Europe. It is leased for 99 years, and is thus strategically important in the long-term. It reaches across the whole of Kosovo with its two million inhabitants. 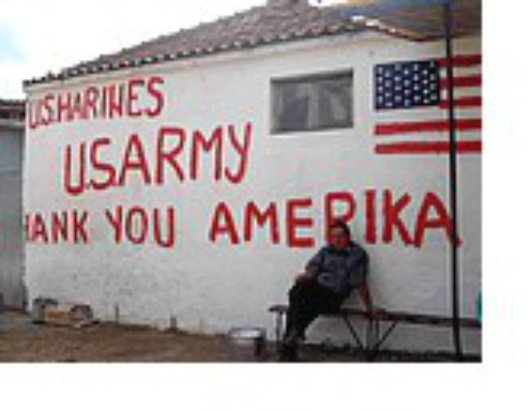 The USA also plays an important role in civilian matters. The position of Deputy of the UN Civilian Department UNMIK is created by a US statute. The future US embassy and the offices of USAID, the official US agency for democratisation and economic development, is situated in the middle of a large estate in Kosovo’s main city. The development and democratisation process is co-ordinated from here and is financed by the US.

Furthermore, Americans are involved in both small and large NGOs. Around a dozen large NGOs are operating. Among the three Americans is Kristin Griffiths from the Mercy Corps in Pristina. When Griffith visits the villages around central Kosovo she always hears the same phrase - ‘Bill Clinton and God saved Kosovo’. The initial enthusiasm for the Americans has only waned slightly since the war: ‘Kosovo is one of the few countries in which we Americans are welcomed without fail.’

Young war veteran Fazilu doesn’t know a great deal about US commitment to Kosovo's democratisation, but he’s learnt a lot from his lessons. ‘Kosovo will be an independent state with respect for all minorities.’ Many Kosovans like Fazilu can’t think further than that longed-for day when the UN Security Council decides the status of Kosovo – probably in the next few weeks. Although EU member states haven’t so far been able to agree on the question, the USA would prefer to see Kosovo as more independent today than it has been before.

In the predominantly Serbian populated north of Kosovo, the US is considered to be an ally of the Albanians. This is in large part thanks to their expulsion of the Serbians from Kosovo. The approximately 100,000 Serbians still living there have congregated in little enclaves in the north of the province. ‘Fuck Coca Cola, fuck the pizza, all we need is Slivovitza,’ is scrawled across postcards and placards in souvenir shops on the Serbian side of the divided city Mitrovica (Serbian: Mitrovicë).

The Serbs build on the traditional support of Moscow. As a member of the so-called Balkan-Contact Group, Russia has often stepped up to offer to support the situation only when all parties involved are agreed on a composite solution to Kosovo's status. This UN Security Council resolution could in turn be rejected by Moscow's veto. The old dichotomy of the world – in Kosovo, it continues to exist.

The author is a member of the German N-Ost network