We arrived in Vienna just before 9 this morning.

We lasted about 7 minutes on the 23.21 from Frankfurt Gbh (carriage 253) before being told to keep quiet or we’d be chucked off. This is a record for me, and I have taken A LOT of couchettes and snow trains etc.

I tried to propose a silent game such as Chinese Whispers/Broken Telephone/Arab Phone (choose your translation of choice) as a compromise between having fun and shutting up…but was so tired I couldn’t think of a decent thing to whisper.

We’ve been struck down by diarrhoea (sorry for those of you eating lunch) too so San Sebastian train was an odd mix of late night raucousness, Spanish conversations at 3am about boys, and silent sleeping invalids…we blame the daily dose of Turkish food and general poor diet of station coffee and street sausages.

But the last couple of days have been a really pleasant surprise…Essen was the most ‘unknown’ destination for most of us. In fact, I don’t think anyone on the train had been before.

We stayed in Marxloh (www.madeinmarxloh.com) in Duisburg, a 15 minute train ride from Essen. It is a predominantly Turkish neighbourhood with the most extravagant bridal dress displays in the most wedding shops I have ever seen. The Made in Marxloh guys are truly inspiring, check out their website. They work on the 5th floor of an old bunker with views of the Ruhr factories (and IKEA).

On Thursday night, they threw a party and Paulo Martinho found a soul mate, someone he could really talk to… 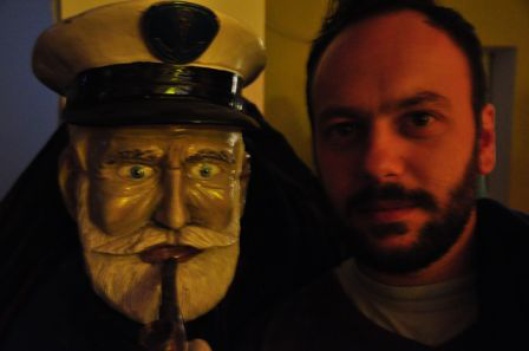 Paulo and his Captain

Yesterday, we worked from the Unperfekt Haus in central Essen, following a recommendation from the lovely Mira from Ecce. Ironically, it was perfect. Fast Wifi, all you can eat buffet of delicious homemade food, cheerful staff including a friendly transvestite and an assortment of miniature dogs….