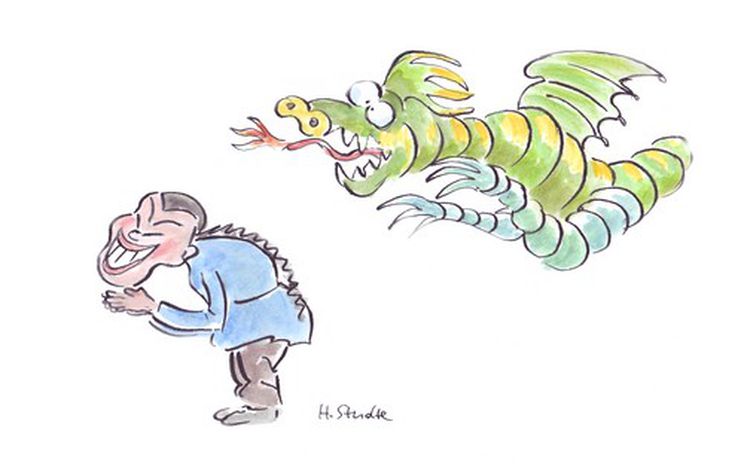 Afraid of China ? Not a smidgen! It is predicted that within the near future there will be more software developers, pianists or cars in China than in Europe, as well as a surge in air pollution that will annihilate the effects of all the solar-energy panels on Old Continent. In short: China is becoming powerful

Extremely powerful. Which is why, as soon as possible, we Europeans need to look into exactly what the Chinese expect from us. What better indicator than language? Unable to translate literally from our alphabet, the Chinese render the names of European countries into genteel images – some more telling than others.

Portugal is rendered relatively simply, with the Atlantic nation going by the name of the ‘land of wine’ (Pu Tao Ya). Things go up a notch further north in Great Britain. The Chinese opt to call the former superpower that twice attacked China in the interest of protecting the opium trade Ying Guo. There is no limit to Asian politeness with this ‘land of heroes’!

And the Germans? Do they live in the 'land with no speed-limit,’ ‘the land that set off two world wars’ or even better, ‘the land of the Erdinger beer-belly’? Way off. De Guo, say the Chinese when setting off for Germany – the ‘land of wisdom'.

Some French favourites might be: the 'land of the eternal strike,’ the 'land of agricultural subsidies' or even the 'land where, while serving as president, one is not obliged to step down even when one is completely corrupt.’ Here again though, the Chinese prove their diplomatic skills, translating France as Fa Guo – the 'land of law and rights.'

So who’s still afraid of China?