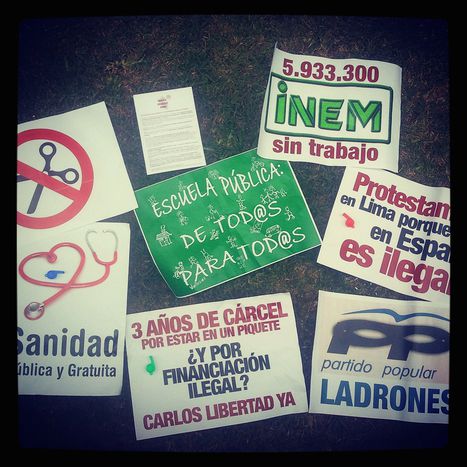 Aside from a few comments on Twitter, the sacking of television presenter Hilario Pino has gone relatively unnoticed in Spain. The suspected grounds for dismissal were the publication of a video showing the escrache suffered by Soraya Sáenz de Santamaría in Lima. That being the case, we would be facing a new attack on the freedom of speech by the Spanish People’s Party (Spanish: Partido Popular). 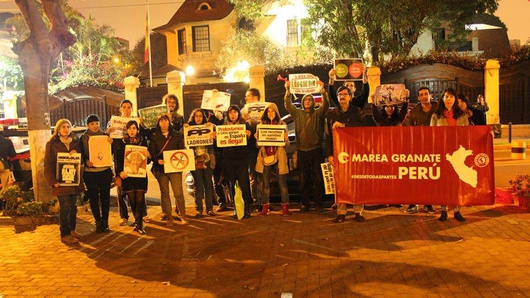 Sunday 20th July: The Deputy Prime Minister of the Government of Spain, Soraya Sáenz de Santamaría, got out of her car in front of the ACS headquarters in Lima, Peru, where a smiling Florentino Pérez was awaiting her – as well as a group of demonstrators from Marea Granate Perú, an organisation formed by Spaniards who have been forced into economic exile. The look of surprise – and disgust – on the Deputy Prime Minister’s face was huge, as can be seen in the video which was shared by Marea itself. It was an escrache on the other side of the world – and she hates escraches. Without the security measures which accompany her every step of the way in Spain and with a police force much more permissive than the Spanish one, the Deputy Prime Minister could clearly hear the whistles and cries of “vete para España” (“get back to Spain”), “sinvergüenza” (“shameless”), “corrupta” (“corrupt”), “ladrona” (“thief”), “Carlos libertad” (“free Carlos”) and several accusations concerning the raised unemployment suffered by the country and her government’s dismantling of the welfare state.

It was a surprise protest which turned out to be very effective, much more so than even the members of Marea Granate had expected. “We received information that they were having dinner that evening in the Spanish ambassador’s house and amongst assembly we decided to take action,” the organisation explained. However, as they were making their preparations, they were finding out more information regarding Sáenz de Santamaría’s agenda. As a matter of fact, the video which has received so many views is the one of the actions organised in the morning in front of the headquarters of ACS, the company which was awarded the contract to provide Línea 2 of Lima’s Metro. “Strong action was intended for the meal at the embassy,” they revealed. But the Deputy Prime Minister was well prepared and entered the Spanish ambassador’s house through the back door, rendering useless the main call to arms which had managed to bring together some fifty people.

Marea Granate Lima didn’t give in. Days before – and purely by coincidence – they’d found out where the Deputy Prime Minister was staying, and so several of the platform’s members went to wait for her at the door of her hotel. “She wasn’t expecting it, she ran inside. The funny thing was, the elevator didn’t arrive and she had to listen to the cries for a few minutes,” claimed an excited woman involved with Marea. There were three escraches in total, two of them done successfully. And the funny thing is that the video of the first one, filmed “with the worst camera that we had” and without the final montage that they’d planned, was the one which had the big response.

The sacking of Hilario Pino

A day later, on an edition of Spanish newscast Noticias Cuatro 20h, the presenter and editor of the news programme, Hilario Pino, broadcast the video of the escrache received by Soraya Sáenz de Santamaría in Lima. And four days later, Spanish television network Mediaset announced Hilario Pino’s departure from the channel after 15 years with the company and named his new replacement, Miguel Ángel Oliver.

Mediaset's press release was brief: “As of today, Hilario Pino will be entering a new stage in his professional career outside of Mediaset España, where he has provided the news broadcasts with outstanding work as a presenter and editor for almost 15 years, firstly on Informativos Telecinco and later on Noticias Cuatro.”

Following the press release, however, news is spreading across the Internet that Hilario Pino was sacked because of the infamous video. It seems the Deputy Prime Minister of the Government doesn’t like to appear on the news being hissed at and decided to call the channel to demand an explanation. Marea Granate doesn’t know whether that was the excuse used to get rid of a journalist who didn’t sit well with the channel’s powers that be, but they insist that “the call did take place”. One member of the organisation thinks that, “It creates a very negative precedent, because now the journalist is going to have to think before he publishes something. It’s an attack on the freedom of speech,” although he points out that, “It’s not a question of ‘poor Hilario’ either; it’s about the government’s interference in the press.”

“Free” press business owners and politicians have common interests. Politicians are aware of this, just as they’re aware of the fact that they depend on the media to remain in power. Hence the fact that many news items don’t appear in the media or get distorted. The consensus at Marea is that, “They’re normalising a situation which isn’t normal.” Another member of the group complains that, “Not one massive media outlet has discussed the emigrants’ problem of having to ‘beg’ to vote in the European elections.” In this sense, the organisation denounced that only 158 individuals had managed to vote from Peru in the last European elections, while there were around 20,000 Spaniards residing in Peru, according to data from the Spanish Statistical Office.