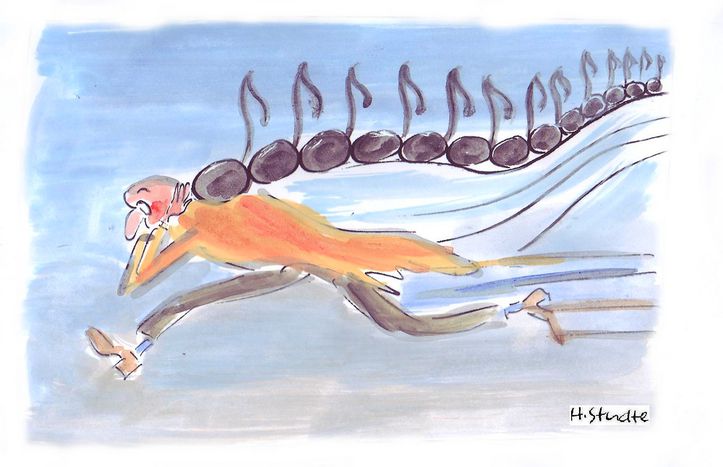 Creepy-crawly expressions for the irritating musical attacks of the ear-worm in Europe. Expression of the week

I just can`t get you out of my head, crooned Kylie Minogue. The Australian singer and actress may not have been referring to her catchy pop dance song of 2001, yet millions of people around the world had this very problem. They had all been infected by the same virus: the ear-worm (Germanic name: Ohrwurm). Sufferers of this illness complain of poor concentration, frustration and uncontrollable attacks of sing-along-ism and hum-itis. The latter symptom in particular is extremely contagious and contributes significantly to the spread of the dreaded ear-worm.

In the past the Germans would also use the word 'Ohrwurm’ to refer to an ingratiating person. These days the term is symbolic of music that slips into the auditory canal like a worm and nests there, a linguistic development no doubt contributed to by the closely related flying insect known as Dermaptera, or earwig. Contrary to popular belief, however, this creature is completely harmless to humans.

Unlike the musical ear-worm, of course – which spreads as quickly as the ‘Pop Idol’ bug. In Britain we have acquired the term ear-worm, a literal translation of the German 'Ohrwurm', to describe a catchy tune. Spaniards, meanwhile, know this as a sticky song (canción pegadiza), similarly to the Portuguese, whose ear chewing-gum (chiclete na orelha) is a play on the tendency of ear-worm to stick around. This is an insect which can stay firmly inside one’s head for a good few hours, if not days.

The descriptions used by the Italians and French for the ear-worm also betray what they think of the pesky intruder: numbing music which you can't get out of your head (musique entêtante), say the French, and an irritating song (canzone tormentone) according to the Italians. It has not been disclosed whether the United Nations formally recognised incessant music as a method of torture in 1997. But just how am I going to finally get rid of this tune running around my head (chodzi mi po glowie), as the Poles put it? Musicologists prescribe singing a song of your own or putting on some different music.