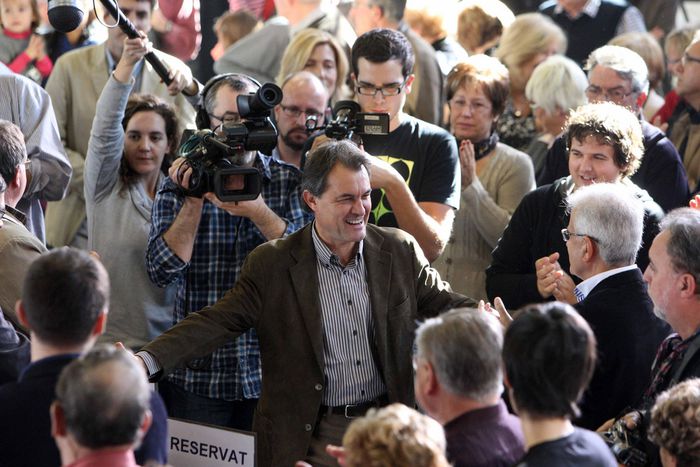 The Catalonian parliament voted on Monday in favour of a resolution for the region's secession from Spain. The separatists have put themselves in an impasse with this move, some commentators criticise. Others blame the Catalans' desire for independence on the EU.

With their decision to approve a resolution to move toward secession from Spain Catalonia's separatist parties, Junts pel Sí and CUP, have made a major mistake, writes the centre-left Catalan daily El Periódico de Catalunya: "The independence movement has embarked on an aimless process of escape to nowhere which will be brought to a halt in a few days' time when the Constitutional Court suspends the resolution and threatens to remove a number of deputies and members of the regional government from office. ... Either this will remain a fruitless gesture soon to be forgotten by the parliamentarians or it will have consequences that could place a large number of people beyond the legal boundaries. ... The Catalan regional parliament is breaking all the rules of democracy and won't meet with understanding from anyone in the whole of Spain, in the European Union or in the international community." (10/11/2015)

With his parliamentary initiative Catalonian Prime Minister Artur Mas has led his party into a dead-end, the centre-left daily Der Standard comments: "At the end of September the separatists already achieved an absolute majority mandate in regional elections - however if Mas had looked further than the election arithmetic he would have seen that the majority of voters didn't back him. But the separatists still insist on taking a course based solely on building up anger against Madrid. This is certainly not what a grand political vision looks like. The Catalan voters are not so heedless of the EU Commission's warnings that independence could mean the end of EU privileges and euro membership. It was counter-productive of Mas to dismiss these warnings as absurd. But now - it seems - he can no longer extricate himself from his strategy. The hunter may soon become the quarry." (10/11/2015)

If the European Union took a fundamental approach to resolving the current crises it would take the wind out of the sails of the separatist and Eurosceptic movements, argues the liberal daily La Stampa: "The EU may not be able to determine the outcome of British or Catalan separatism, but it can take action against it. The secessionist trend is being reinforced by the image of a Union that battles crises without ever resolving them. Yet again Greece's debt is under discussion, but the main problem remains the migration issue. We can't expect any miracles from this week's EU-Africa special summit in Malta. But at least we can hope that a clear course will be charted out that gives the people and the governments the feeling that Brussels is really tackling the refugee problem without losing the Schengen Agreement or freedom of movement." (10/11/2015)