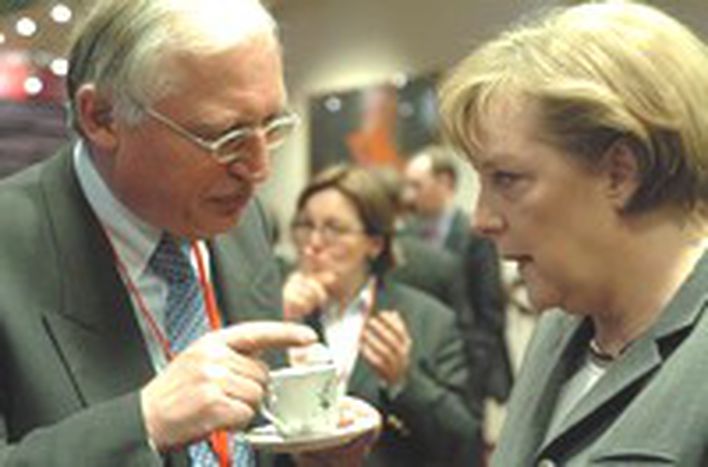 Car manufacturers will have to reduce petrol consumption in all new vehicles, say the European Commission. Yet Angela Merkel wants to defend the interests of the German car industry

Luckily we’ve got a European Union, otherwise climate protection in Europe would have been doomed long ago. On February 7, the Commission presented a policy paper that obliges car manufacturers to ensure all new cars have a maximum emissions level of 120g CO² per kilometre from 2012 onwards.

Stavros Dimas, Environment Commissioner, was itching to present the policy paper more than two weeks ago. The ambitious Greek had wanted to achieve the goal of 120g through engine technology improvements alone. However Günter Verheugen (SPD), German Commissioner for Industry, was up in arms against Dimas’s proposals. He was able to achieve a reprieve for the manufacturers – allowing them to count up to ten grams of bioethanol, efficiency improvements in air conditioning systems, as well as optimal tyre pressure to the total.

Verheugen is supported by Angela Merkel (CDU), the German Chancellor and current European Council president. Speaking to business representatives at the end of January, Merkel expressed her wish to act 'with full force' against Brussels' climate protection plans. No wonder: German car manufacturers, above all Mercedes and BMW, are well-known to make their money from comfortable, petrol-guzzling limousines.

Merkel’s tough talk came as a surprise, though. After all, she had wanted to demonstrate her climate protection credentials during her six-month European Council presidency. Whether speaking to parliament or to the World Economic Forum in Davos, Merkel has ceased to describe global warming as the 'most important challenge to humanity.' 'It must be made clear to everyone that every country has to actively work to reduce harmful emissions,' she stressed in an eco-minded interview in political magazine Cicero's January edition.

All this is just hot air, merely pumping further unnecessary carbon dioxide into the atmosphere. Merkel claims to want to save jobs endangered by the CO² regulations. That may well be true, but if decisive action is not taken now, climate change will put the entire world economy in danger. Nobel Prize winner and economist Sir Nicholas Stern has done the sums, published in a report at the end of October. Not to mention just last week, when the UN climate watchdog removed all remaining doubts that human activity is causing global warming. According to their report, there will be serious consequences if immediate decisive action is not taken to put a brake on CO² emissions.

Merkel knows that, and she also knows that Europeans are afraid of the consequences of climate change. In the meantime the issue is sizzling. Not only the unpredictable weather of the past few months is contributing to this, but popular environmental activists taking the limelight such as Al Gore with his documentary 'An Inconvenient Truth.'

Even so the German Chancellor is shielding the German automotive industry, so that its wealthy clientele can continue to travel around cities in their sleek SUVs. It is both anachronistic and irresponsible. Europe must change the course of its environmental policy if it still wants to get its act together. The future lies in petrol efficient cars. Those who fail to recognise this are not only a danger to the environment, but to jobs as well.

Should environmental groups criticise the Commission for having given in to the automotive lobby, Dimas can say he achieved partial success. The European automotive industry will for the first time be required to make a contribution to climate protection. It is a small but important step in the right direction – thanks to the EU.