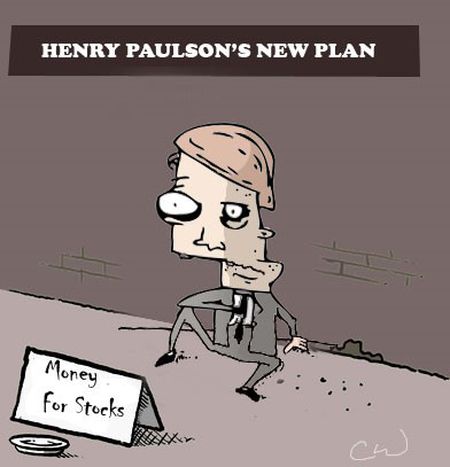 2009 - the American investor, believed to have perpetrated the biggest financial scam in history, didn't look like he broke plates, say the Spaniards. How else do Europeans describe someone who looks innocent, but is not? Fishy situations and more in the weekly run of idioms and audio

2008 has come to an end and Time magazine has named Barack Obama its man of the year. By contrast, it would be difficult to imagine former Nasdaq boss Bernard Madoff, 70, on the cover. Although irreverent, the homage would have been infinitely more relevant. Isn’t this sad case a shining example of this period of financial delinquency, subprime loans and golden handshakes? In the opinion of one of his many victims, Steven Spielberg (more talented behind the camera than savvy with his investments), Wall Street fraudster Madoff seemed aussi doux que l’agneau (sweet as a lamb).

At a time when the City is far from closing on a high, for the British, Madoff was truly the sort of man to whom you could entrust your nest egg with total peace of mind. Butter wouldn’t melt in his mouth

, the Brits would remark of his cool attitude. The French would have given him God without confession (donner le bon dieu sans confession), they trusted him so much. The Spaniards go one better in describing angelic innocence, remarking mockingly that he seemed to have never broken a plate in his life (parece que no ha roto un plato en su vida

) behind everything, whereas the Germans are able to sniff out danger in the bushes (da ist etwas im Busch

). Animal connotations come in elsewhere: Brits who find something fishy

. Spanish intuition says that there is a cat locked in the cupboard (hay gato encerrado

). The Italians take that cat metaphor and turn it into a warning. Madoff simply borrowed from one person what he couldn’t repay to another. As the Italian infinite wisdom goes, tanto va la gatta al lardo che ci lascia lo zampino

(if the cat steals the fat too much it might lose its paw).

In the  troubled waters of the financial world, the French prophesise that tant va la cruche à l'eau qu'à la fin elle se casse(So often the pitcher goes to the water that in the end it breaks). Today, the 50 billion dollars that Madoff swindled from the trusting rich is almost the same amount in euros. A mere trifle! Looks like those nuts* will need to be stored away this winter more than ever, whilst that nut awaits being put away himself.