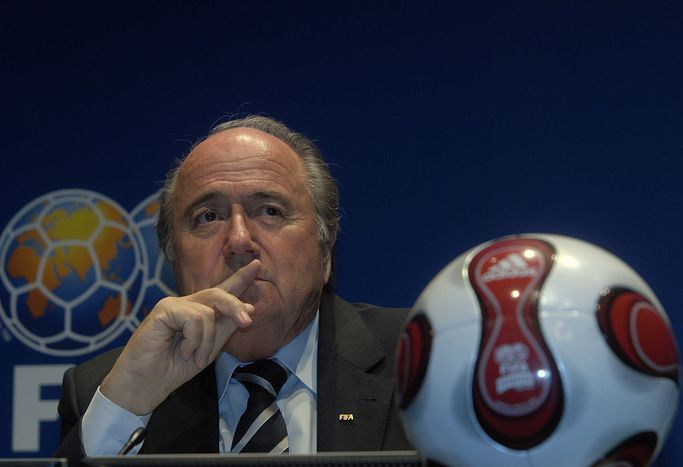 Business as usual for FIFA's own Dr Evil, Sepp Blatter

Despite the corruption investigations currently under way against top Fifa officials, President Joseph Blatter plans to run for re-election in Zürich today. There is no reason for Blatter to resign since he has done nothing wrong, some commentators write. Others believe only the sponsors have the power to bring about change at the seemingly unassailable international football association.

Blatter's opponents and critics have been trying to blacken his name for years but the accusations always turned out to be unfounded, the editor-in-chief of the Swiss weekly Die Weltwoche writes in a guest commentary for the conservative daily Frankfurter Allgemeine Zeitung, calling for more recognition of the good work the Fifa has done: "Amidst all the intrigue people forget that Blatter's Fifa has become the most powerful development aid agency in the world, a top-level NGO. All the good people who are now going on the barricades against him should be grateful to him. Since Blatter took office Fifa has put over two billion dollars into sport-related social development measures all over the world, including Africa. … The Europeans want to dominate global football. The chauvinistic English are disappointed because they didn't get the World Cup. Blatter, whose success irritates his critics, must navigate his way through a minefield of power interests. This is why he has become the target of criminal accusations." (29/05/2015)

Fifa as impenetrable as the Vatican - Lidové noviny, Czech Republic

Fifa's major sponsors have reacted with dismay to the corruption investigations against the international football association, writes the conservative daily Lidové noviny, seeing this as a hopeful sign because Fifa seems to be as unimpeachable as the Catholic Church: "The world of the Fifa leadership is like that of the Vatican. Impenetrability and secrecy dominate its media image. ... As in the Vatican, there is no opposition within Fifa even though its leadership is democratically elected in the end. … In the 111 years of Fifa's history only eight men have been at its helm. There have been ten popes within the same period of time. This means the international football association is even more firmly entrenched than the institution for the representatives of Christ on earth. There's no cure for that yet. … But Fifa's major sponsors have the power to act here. Visa has already threatened to withdraw its sponsorship." (29/05/2015)

Despite the serious accusations being levelled at Fifa it is too soon to announce a boycott of the next World Cup or Uefa's withdrawal from Fifa, the centre-left daily The Guardian warns: "Gary Lineker has wondered whether we just need 'to start again'; others have called for national sides to boycott its tournaments or for Uefa to walk away. ... Calls to boycott Fifa and the World Cup should not be the reflex option. Why go to the brink immediately? Boycotts of big sporting events have their place in the toolbox of protest, but now is not the moment to threaten them. As importantly, has anyone asked the players, officials and clubs who would be affected by a boycott what they think?" (28/05/2015)

Uefa has threatened to withdraw from Fifa if Sepp Blatter is re-elected. A new federation competing with Fifa could be a feasible option, the Christian-social daily Trouw comments: "The idea has been rejected as unserious and too European in the past. The football nations in Latin America and Africa are too loyal to Blatter, and so a new association would only bolster their already strong ties, people argued. But with the FBI's intervention and Uefa's reaction, an alternative to Fifa has become a little less theoretical. The survival chances of such an alternative seem small, but nevertheless bigger than the chances that Fifa will ever be free of corruption. Bribes and nepotism have been part of Fifa's culture for too long." (29/05/2015)