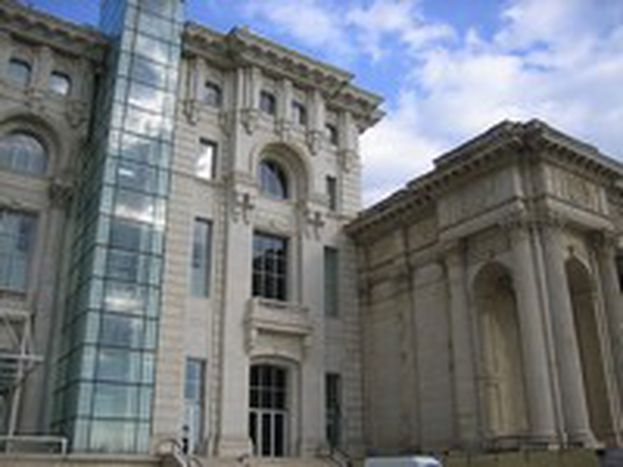 From his living-room window Sorin Vasilescu looks out over Bucharest City at ‘monstrosity’. He refers to the parliament building, built as a centre of power by Romanian dictator Nicolae Ceauescu. In times gone by, Vasilescu surveyed a different Bucharest: downtown lanes meandered round the city, houses which had been renovated after an earthquake at the end of the 1970s survived the centuries. ‘Restoration is like an operation, a scalpel must be used to operate delicately.’ Disappointedly, he goes on to say that, ‘Ceauescu came with an axe and hacked everything up’.

‘Monstrosity’ is a fitting description. With an area of 65, 000 square metres the building is gigantic. The Reichstag in Berlin would fit in to it 5 times and you’d need to set aside three and a half days to look round it and see every room! Tourists can look round the building in a half an hour long tour, where they are told the story of how, in the middle of the 80s, 20,000 workers and 400 architects had to erect the building without fail using only Romanian building materials. Not a word about the enforced resettlement programme in the inner city, not a word about the inhumane deprivation: Despite the lack of food, energy and building materials a luxury building engulfed the inner city.

After the fall of the Ceauescu regime the monstrous ‘palace’ was fiercely discussed. US billionaire Donald Trump wanted to turn it into a casino but the house remained unsold. Since the middle of the nineties, it has been the home of the Romanian parliament, and later came the constitutional court.

Ceauescu had already planned a centre of power in the building. In the ‘House of the People’, the dictatorial reigning couple, the party apparatus and the secret service (‘security’) were to sit side by side. The fact that this resembles today’s set up seems at the very least a little strange. ‘Most MPs admire their office. The only hard thing is getting used to this large house’, says a former MP. It can also be seen from the entries in the visitors book how the building is seen by the public ‘such a masterpiece, it was worth starving for’.

‘A palace heated with diamonds'

The Romanian Parliament building is even featured in the Guinness Book of Records. It’s size is beaten only by the US Defence Ministry. ‘Romanians love the house because it’s so big,’ explains preservationist Hermann Fabini. ‘Finally they can compete on a global scale’. As a former MP, he knows the rooms of the house in which he says ‘a democratic parliament runs successfully’. The rooms, constructed in marble and exotic woods, are several metres high. In many, heavy crystal chandeliers hang on gold ceilings. ‘This luxurious house would easily fit in Dubai,’ says Fabini. The 12 floors are a labyrinth. You might have to cover a distance of several kilometres just to get from an office to a sitting room. According to Fabino, the design and décor of the house ‘has nothing to do with ‘efficient, modern administration’.

The administration themselves are proud of the house and according to Georgeta Ionescu, the general secretary of parliament, it is an ‘achievement of the Romanian people’. The building materials are strong and sturdy and can last many many more years. However, over the next few years, Ionescu wants the parliament building to become more visitor friendly. It still looks like an impenetrable fortress.It is also still a reminder of the victims of the Ceauescu dictatorship. For economic reasons, this project has been put on ice. Ionescu says that, ‘we may have the second largest house in the world but we don’t have the second largest budget!’

Mihai Oroveanu, director of the Contemporary Art Museum, calls the house ‘pompous kitsch which the dictator always loved.’ Due to a lack of any other alternatives, the museum has been moved to a wing of the palace. ‘At least we were the only tenants with enough courage to change the splendorous construction created by Ceauescu.’ In the exhibition halls, coversheets were used so that ‘visitors weren’t degraded by the extravagant décor and artwork’. The museum also saved on heating costs. This wasn't very noticeable, as in the palace efficiency and cost-effectiveness are not an issue. The maintenance and additional expenses alone cost around 8 million Euros a year. ‘Romanians consider the house so ingenuous,’ says Mihai Oroveanu, ‘that no-one would be surprised if we heated the place with diamonds!’