Brussels: The concrete heart of Europe

[SPONSORED CONTENT] As the European Union reaches a turning point, Brussels is trying to show off its European identity. We visit four symbolic places guaranteed to make you fall in love with the good Old Continent.

No champagne, no petits fours, no official photos of Donald Tusk cutting a red ribbon with silver scissors. Instead, there's a line of more than 2,000 European citizens waiting impatiently for the gates of the Europa building to open. This particular Saturday, 10 December 2016, the new headquarters of the European Council is thronging with people. Many have been waiting for a long time. After more than a decade of work, Europe's newest jewel is revealed: a gigantic cube which will host meetings between representatives of the 27 member states, from ministers to heads of state.

Europa: the antithesis of European institutions

But the first people to see the Europa won’t be Angela Merkel, Theresa May or Mariano Rajoy - they’ll be Patrick, Laura or Fernando. Hundreds of ordinary people have braved the elements to enjoy the open day put on by Europe’s institutions, who have made a point of welcoming the ordinary people of the Old Continent ahead of its leaders. Has Christmas come early? Certainly for those who like a challenge. For Europa’s new look is certainly unconventional: taking up more than 70,000 square metres, the building boasts 3,750 windows, a central lantern in the form of a giant egg, lit up by 374 LED tubes and a certain idea of melding the old and new. The cost? €321 million. Critics have called it a white elephant, pointing to how far the budget has swelled from its original €240 million - not really fitting for a building in which technocrats in suits and ties will get down to the task of running Europe.

The Belgian architect in charge of the project, Philippe Samyn, has tried to justify the huge price tag. Firstly, he says, it costs the likes of Patrick, Laura and Fernando much less than the NATO building sat at the opposite end of the city, which cost around €1 billion. Secondly, the Europa has a real, European identity: its façade is made up of a series of wooden frames, the lumber taken from sites across all the member states of the EU. Then he plays his trump card: the meeting rooms where the summits of EU leaders will be held, which will be resplendent in coloured tiles that reach from floor to ceiling.

"Institutional buildings are often austere or even sinister," says Samyn. "We wanted to construct a relaxing place which underlined the joy in making these important decisions." We’ll see whether the colours help to relax tensions between Angela Merkel and the Greeks when the building opens properly in 2017.

Beers by the Berlin Wall... in Brussels

One thing is certain: with the Europa, Brussels is adding an extra coat of polish to the European quarter. But while the Rue de la Loi now boasts no fewer than three major EU buildings (the others being the Lex and the Justius Lipsius, both of which are occupied by the Council of the European Union), the Belgian capital has plenty more European spaces to show off. Just a ten-minute walk away, another house is waiting patiently to for the public. The House of European History - the first official museum of the history of the EU - will open its doors on 6 May in celebration of Europe Day. Situated in the centre of the Leopold Park, the building’s towers and staircase entrance give it a solemn feel. Built on the foundations of an old dental clinic, it’s already drawn mockery from eurosceptics for (again) the price tag - around €56 million. Still, from next weekend, you’ll be able to learn about everything from the European Coal and Steel Community to the Treaty of Rome and the Bolkestein Directive. And knowledge like that is priceless.

Then there’s the nerve centre of the European Parliament. Known as "Station Europe", this free space allows young people the chance to jump head-first into a virtual representation of the Parliament building. 3D models, dioramas, touch-screens… the EU has spared no expense to make sure that any information about your elected officials is at your fingertips. Station Europe is ideally situated close to the famous Place du Luxembourg - a hotspot for any pro-European night on the town - in what remains of the old Brussels railway station. If you’re unsure about the thought of plugging into the EU Parliament 2.0, go and have a couple of pints on the other side of the road. Europe will never look prettier.

But Brussels isn’t just erecting buildings to the glory of Europe - they’re also moving monuments. On the promenade of the Berlaymont building - the headquarters of the European Commission - you’ll soon have the chance to see (and Instagram) a piece of history: an authentique section of the Berlin Wall, weighing three metric tonnes and measuring 3.6 metres tall, with a painting of John F Kennedy draped in an American flag. The "Kennedy Piece" is one of 15 sections of the wall which were brought to the Belgian capital in 2009 as part of the installation "Breaking the Wall", celebrating the 25th anniversary of Germany’s reunification. German finance minister Wolfgang Schäuble, and EU Commissioners Günther Oettinger and Kristalina Georgieva were on hand to crack open a bottle of champagne. After the celebrations, the Commission bought the “Kennedy Piece” and put it pride of place outside their front door. How much did they pay? We don’t know. Let’s not give the Eurosceptics any more ammunition. 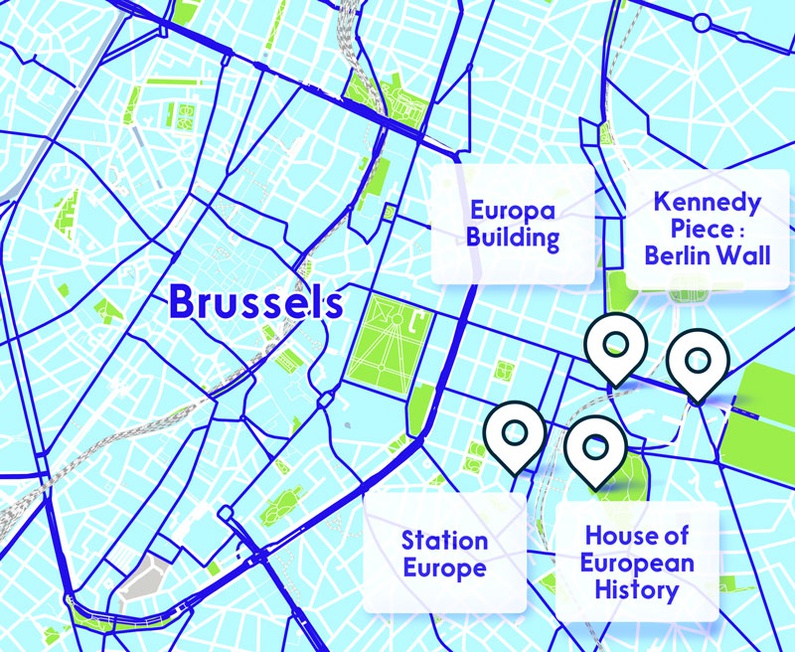 All the buildings mentioned in this article will be open to the public from Europe Day - 6 May 2017.