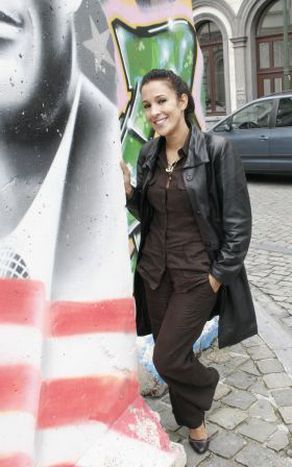 By Rose Kelleher “At sunset, when my kids said to me ' I want to eat this and that' I said “No. We are going to have soup.” Nadia Hachim is tired. But that's okay. It's all in the name of God. The past month she has been fasting, reflecting and avoiding excesses, particularly culinary ones.

Since August 11, Brussels Muslims have put down their forks during the daylight hours, and lived a simpler and more careful existence.

Ramadan, the observation of which is one of the pillars of Islam, fell in the summer this year. Thankfully Belgium's less than scorching climate means that the city's Muslims were not too physically challenged during this holy month of fasting, prayer and good deeds. “The first day was very difficult for me.” says Nadia. But she quickly got over it. “It's all psychological. Now I'm not even hungry anymore.”

Nadia lives in Jette. She is not a very strict Muslim, but a Muslim nonetheless. “I don't wear a hijab or walk with my head down” says Nadia, a beautiful and youthful mother of two. “I like to wear eye make up and I don't wear all-covering clothes” She represents a part of the broad spectrum of Brussels' Muslim population, those who don't follow strict orthodox traditions, but celebrate their own unique relationship with God. “This is a month of spirituality, of generosity. It's a time for sharing. Very importantly, it is a time for self reflection and meditation.” says Nadia. But what does that mean in practice? “We need to reflect on ourselves. What way have we been living? What can we change and improve? At Ramadan, we avoid all forms of excess.”

Last year, Mohammed was the most popular name given to newborn boys in Brussels. It's surprising, then, that Ramadan has passed by largely unnoticed outside of the predominantly Muslim communes of Molenbeek, Scharbeek and Anderlecht. These communes buzz at the time of Eid, the feast to celebrate the end of Ramadan. However, it's just not the same, laments Nadia. “In a Muslim country, everyone would say “Mabrouk Eid” to each other, even strangers. I used to do it in Brussels too, but then I stopped.” She says “I saw a TV program one day where a woman with Arabic features was complaining. She said that people always assumed she was a Muslim because of her appearance. But she was not.” Nadia reflects that in Belgium you just never know. “And so I stopped saying it.”

Kamal, a project manager, also laments this difference. “In Muslim countries, there is a different life after sunset, a special atmosphere. In Belgium, you just don't get that.” He compares it with Christmas “Imagine Christmas in a foreign country. Even if that country is Christian, it's never the same as in your own homeland.” He misses the atmosphere. He says “When I was younger we went to Morocco for the summer holidays. Though I was too young to observe Ramadan, I wanted to do what my parents told me not to do. So I fasted for a couple of days. There was a different feeling there. A special ambience. You won't see anyone eating.”

Nadia has become very introspective over the past weeks. At Eid, she will spend time with her family. “I used to buy presents for my children at Eid, like sweets and clothes. But now they are grown up and they have everything they want!” she says. Both Kamal and Nadia stress that Ramadan about friends and family. Says Kamal “You have to break the fast with family. It is an important part of Ramadan.”

Some complain about a lack of sensitivity by employers around this time. Kamal works for an American company. He thinks that American and British employers are quicker to recognise the sensitivities of Muslim staff. “A few years ago, when sunset fell at about 6pm, friends of mine at Procter and Gamble told me that the company kept the canteen open late for fasters, so they could eat at the end of the day.”

Nadia, however wouldn't know. “I don't have a job at the moment, I am a trained receptionist but I'm trying hard to find work.” She speaks Rif, Arabic, French, Flemish and English. And her Spanish is not bad either. So it's a bit strange that someone of such linguistic ability has difficulty finding a job. Unfortunately, this is a common complaint in Brussels, a city with a high unemployment rate, particularly in Muslim communities.

Nadia says “I have a dream that one day there will be two official holidays to recognise important Muslim dates in Belgium, both Eid Al -Fitr and Eid Al – Kabir (Feast of Sacrifice).” It's not all bad though. The police have been instructed not to eat in public in the predominantly Muslim neighbourhoods to avoid causing offence. In addition, the city of Brussels last year provided places for sheep sacrifice during Eid al-Adha, and disposal units. “In my son's school last year, the children in the class participated in one day's fasting, in order to put themselves in the shoes of their Muslim classmates”.

To know more about Islam in Brussels, contact the Islamic Cultural Centre of Brussels.