Brussels: Outside the Office des Étrangers

Each morning in front of the Brussels immigration offices, an ever-extending queue jostles for the chance to have the interview required to obtain asylum seeker status. More often than not, migrants find themselves bogged down in a sort of administrative quagmire.

Brussels, Office des Étrangers, 5 am. It's still dark, and the rain and bitter cold are taking their toll. It is impossible not to wonder how it can be possible that 300 to 400 people have been waiting for hours in front of the building in Chaussée d'Anvers, in the northern part of the city. The immigration office is the only one in the whole of Belgium that is allowed to conduct the necessary interviews for the certification of asylum seeker status. It will not open until 8 am.

Someone is sleeping in a corner, wrapped in a drenched blanket donated by Red Cross volunteers a few hours before. Others have been awake all night so they did not lose their place in the queue. Some children sitting on the wet ground have the power to smile and make jokes, telling themselves something in a language I don't understand.

There are two different queues: the men line up on one side, the women, children and families on another. They take it in turns to climb over the barricades, transferring news, supplies or blankets to other people in line. 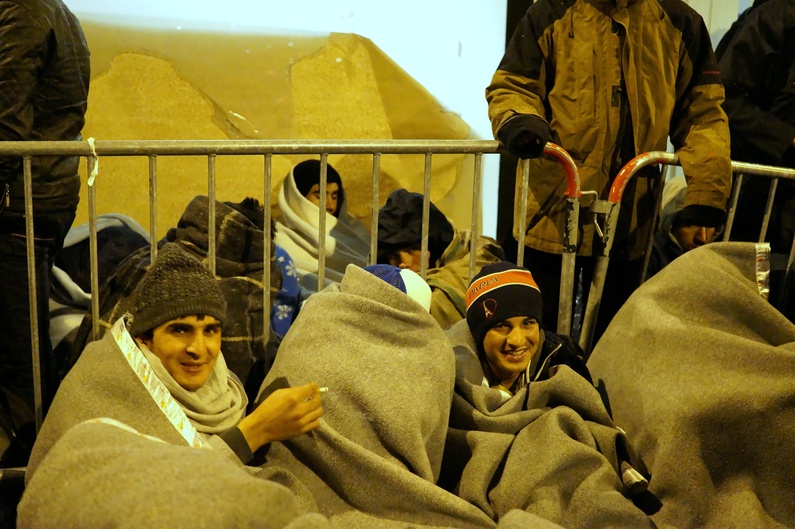 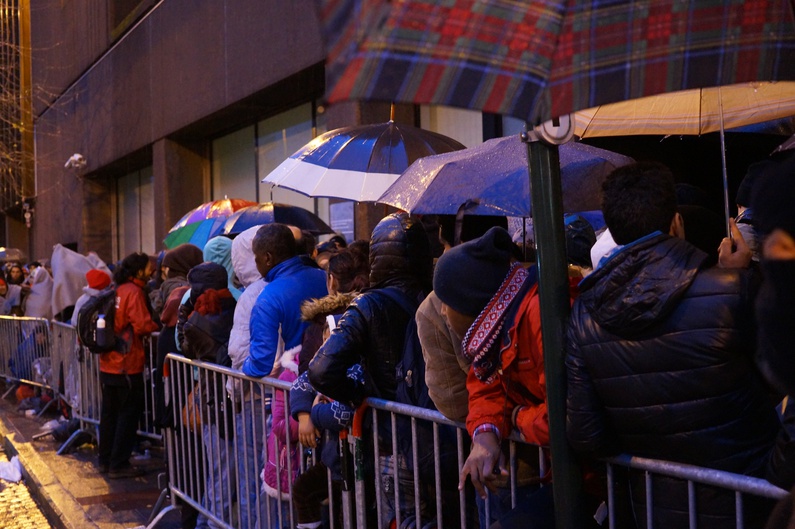 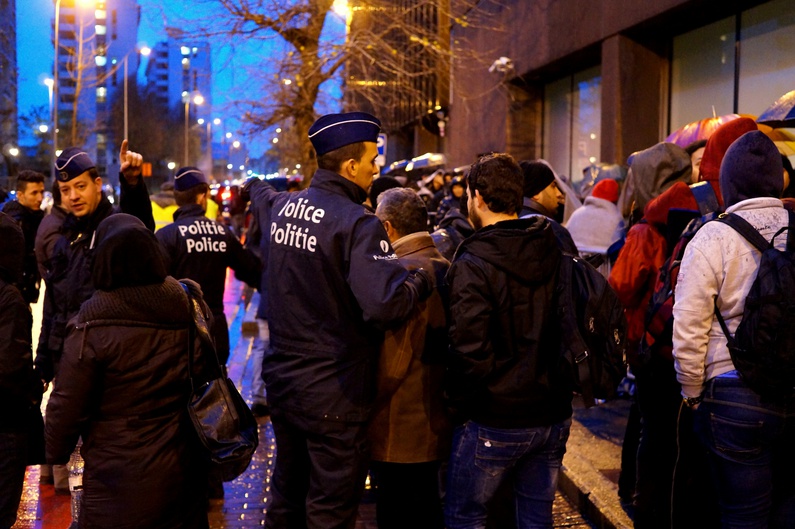 "When Syrians arrive, they bring them inside straight away."

When you get closer to the waiting crowd, the mix of languages and dialects becomes overwhelming: Arabic, Wolof, Somali, French, Pashtun... It is impossible to not be astonished and fascinated.

Among them is Asadullah, a 23-year-old Pashtun man who has been waiting in line since midnight. His eyes are an icy blue, a piercing gaze that challenges your useless feelings of pity. Despite this he has a huge smile on his face, one of those sunny, happy grins that brighten up your day.

"Half of the people here are Afghan!" he explains, "When Syrians arrive, they bring them inside straight away. They ask us to wait first, then to come back the next day... but they never give us any documentation."

There is also a language problem, Asadullah explains that they only have interpreters for Arabic speakers, and that no one is available to translate into his native Pashtun. "It took me two whole months to arrive here from Afghanistan, I can't possibly just end up stayinf here in this line... insha’Allah."

The Afghan community seems to make up the majority of people waiting in the line, but among them I also manage to speak to Lami from Mauritania. "I'm not a Muslim!" he says immediately, setting the record straight, "I don't like religion, it's because of religion that I am here! I'm waiting for the interview, just like everyone here, but I know it is really difficult to get documentation. They would rather have Syrians, Iraqis or Afghans... but I speak French! I'm counting on that. I like Belgium, people help you out a lot if you need it." 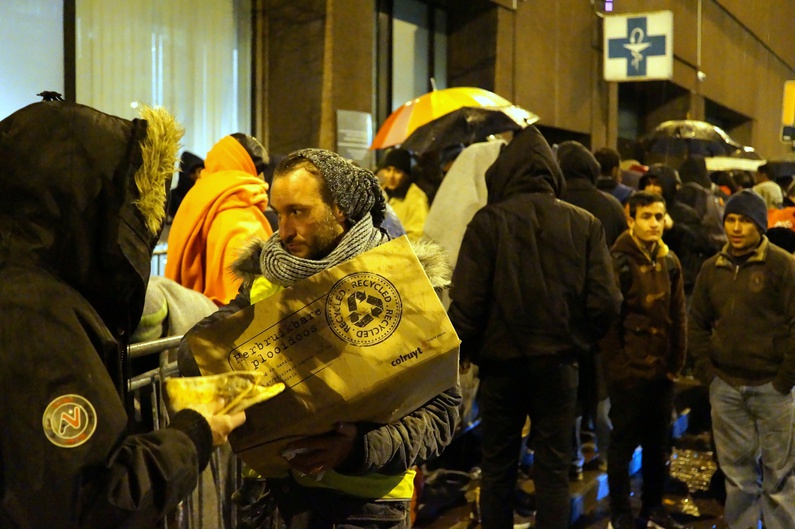 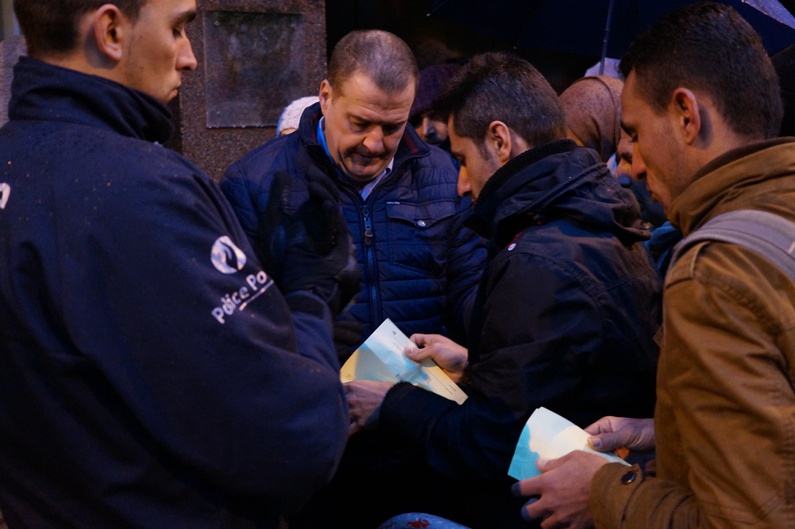 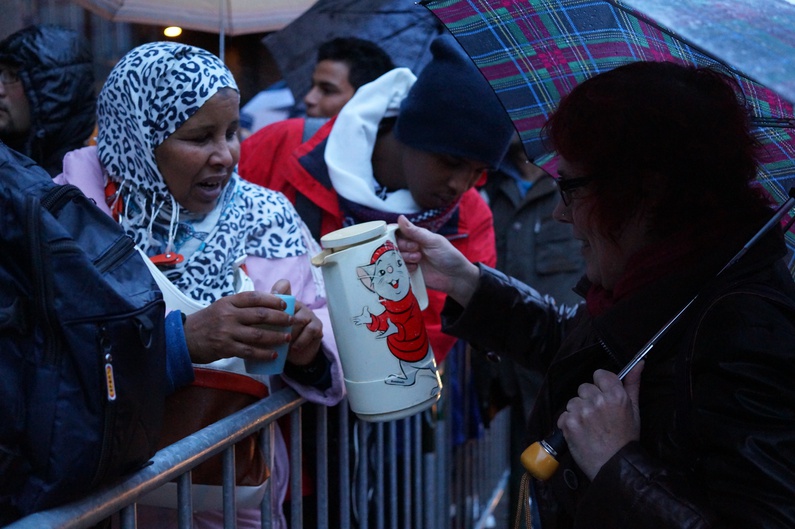 "People aren't here to waste time... they're not here to have fun!"

But the people in this line are not alone. There is a continuous coming and going of humanitarian organisations, volunteers and locals; all of them there to bring food, hot tea, or simply just help out with the language barrier. Muhammed is a volunteer from Helping Hands Belgium. He walks along the line handing out buns from a big paper box to the myriad of outstretched hands.

"We try to be here every week to lend a hand. There are people waiting for as long as 8 hours in line. We're in luck; today there are not too many people. A month ago the line was three times longer, people waited as long as 13 or 14 hours. Many people say they've come here from Syria or Iraq, looking to be more likely to obtain legal asylum status, but on the other hand, how do you know where people are really coming from? People aren't here to waste time... they're not here to have fun!"

An annoyed expression passes over his face when he glimpses the Office door in the distance, but he quickly regains his composure. "It was much easier to obtain asylum status here before the Paris attacks. Now they check and verify every single piece of paper. I'm afraid it's becoming more difficult each day." 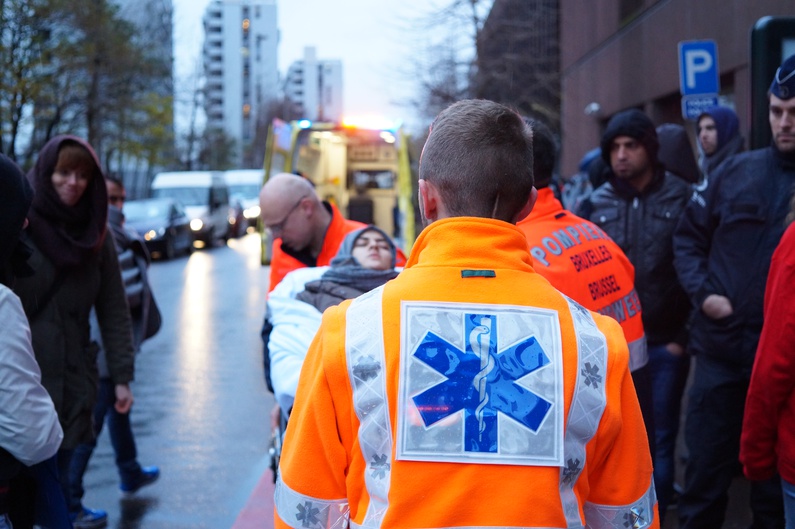 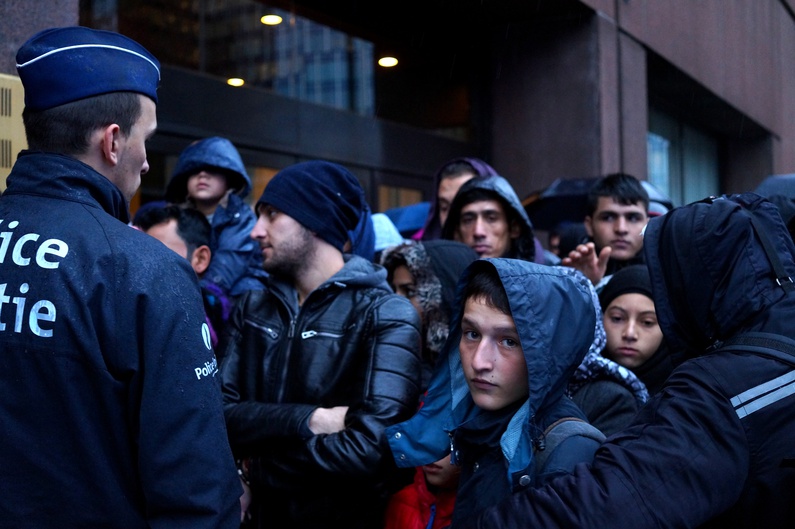 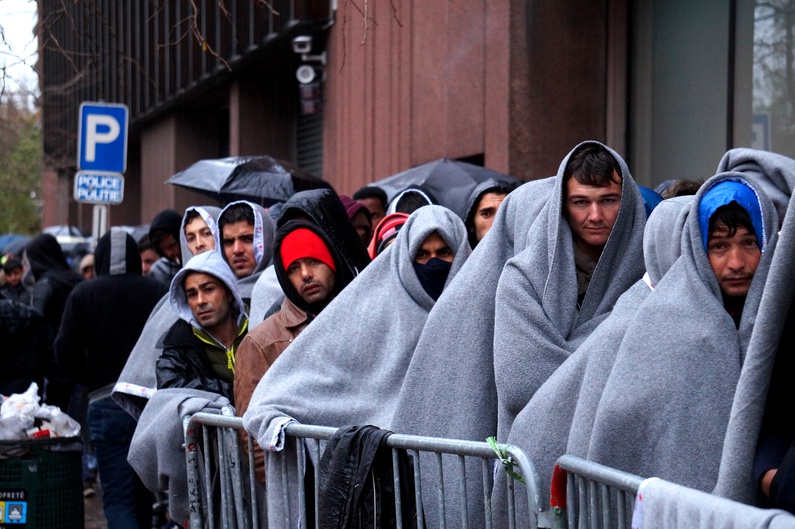 It's now 7 am. Police start to get the two lines in order before the official opening of the offices. This creates tension: the queue, having waited without moving for so long, suddenly comes back to life, waking from a deep slumber. People are pushing. Someone screams. Anyone who tries to outsmart the police is immediately removed from the line. The effects of a night awake in line are starting to show themselves; one young woman falls sick and is taken away in an ambulance.

When the office finally opens, the checking of documents commences immediately. The rules are strict, the treatment is rough, and people are pushed away for any small imperfection or any missing piece of paper.

The office starts with the line of women, children and families. More people continue to arrive. Around 9:30 am, the first line is almost complete, so the officers begin to check the documentation of the men's line. Many have no papers. The police tell those who do have valid credentials to raise them in the air – the checks will continue for what seem like endless hours of waiting. 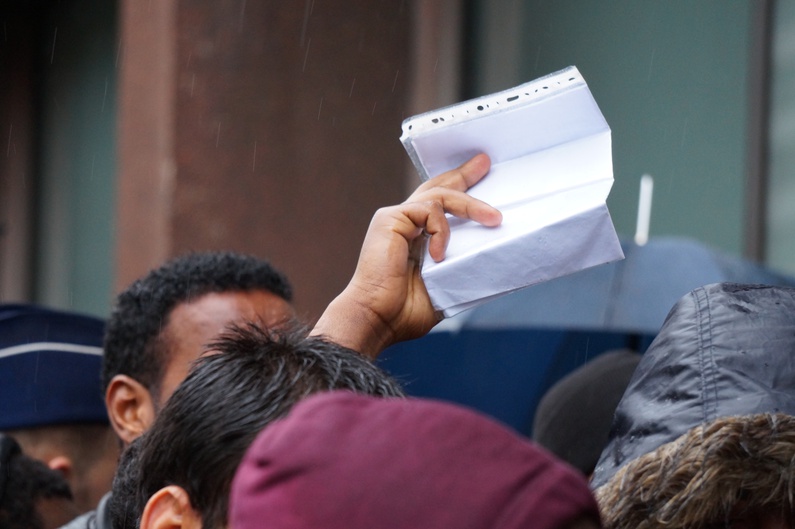 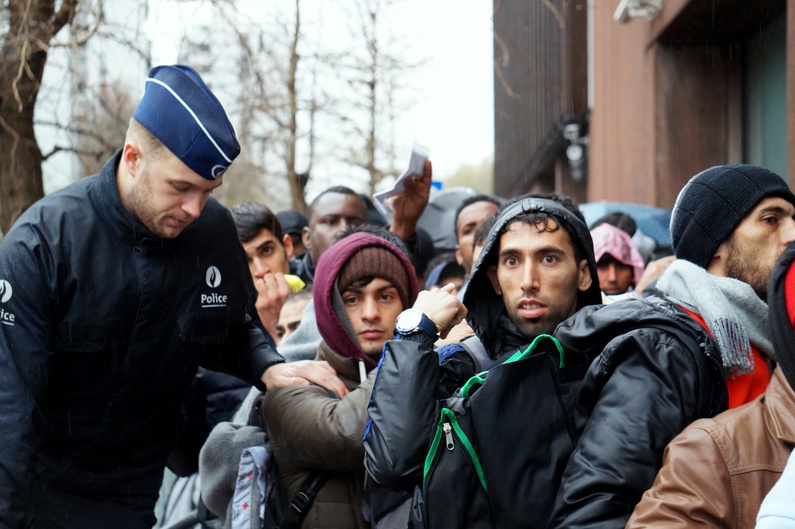 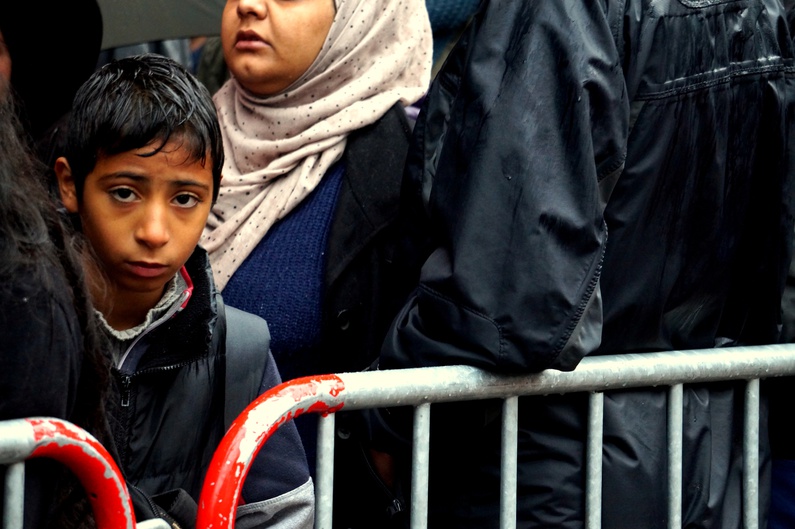 "We'll talk about it in February"

By the end of the day, very few people will have realised their legal status. In fact, many of them will receive no more than a paper giving them an appointment with the office at a later date. This is not an identification document, and it does not grant access to any organisations within the country. People are condemned to a kind of administrative limbo for another 10-15 days.

The situation speaks for itself. Urgent solutions are needed, ones which are effective and immediate. This however isn't the approach that was taken by the last European Council on migration: "We'll talk about it in February" was roughly their response. That was also more or less what the Police said to the line of migrants queuing up outside the Office des Étrangers last month: "We'll talk about it in February."