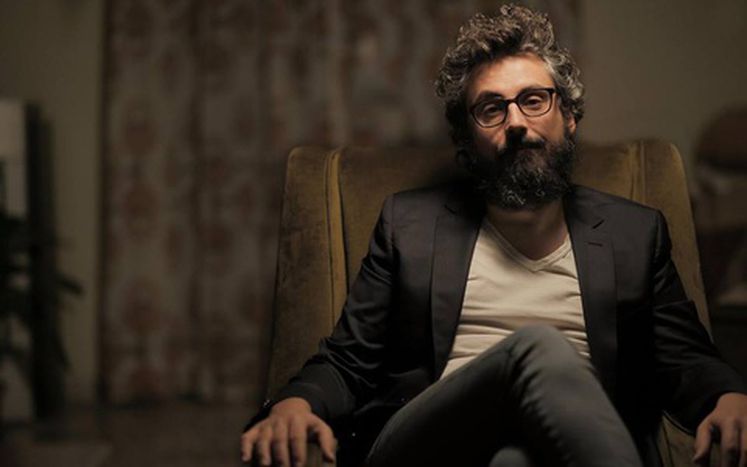 The theatre was completely dark, with an obscure shadow on the stage, a lullaby playing in the background. So began “Brunori Srl – a limited liability company,” a half-concert, half-cabaret that Brunori Sas, born as Dario Brunori, the Calabrese singer from the class of ’77, has already performed in half of Italy: Pesaro, Milan, Genoa, Perugia, Bologna, Mestre, Rome, Prato and now also Palermo.

He's become a bit of a hipster icon, with his cultivated whiskers, oversized glasses and acoustic guitar hung over his shoulders. But one by one, he is losing bits of his distinctive image. We saw Brunori without the beard on the promotional tour  for his latest album – Il Cammino di Santiago in Taxi [Compostela by Taxi], which came out in February last year - and now Brunori has dropped the guitar, instead giving monologues - an integral part of the new show.

"No guitar, but with the beard," he jokes. He still gets on with the public, who don't seem to miss his beloved instrument. "I was already accustomed to a more direct type of rapport  with the audience. I used to talk a load of rubbish between songs in the past as well – he jokes – a bit to camouflage the shyness, a bit because I'm always afraid people will be bored."

So why has Brunori changed his acronym from Sas to Srl [unlisted to limited liability]? "It's partly about a personal transformation, connected to a change in my life: from Joggi, a small Calabrian town of five hundred souls in which I was born and raised into the world that I'm living in today, which is certainly broader and more diverse. On the other hand – he continues – it's about how society has changed before my eyes into a corporation of people - like a limited company, a confused society - especially with respect to the relative limits of our personal responsibility."

"I've left my dreams locked in the wardrobe, there are no more in the drawer," sang Brunori Sas on his debut album, but back then he was still Dario Brunori, and probably resigned to work in his father's small construction materials company, a Sas, in fact. Instead, it was only around the time he had began counting his white hairs that success came along. Arriving almost by accident in 2009, with his first hit album minimally titled  – Vol. 1 – selling almost 7 thousand copies and making Brunori the icon of new Italian indie music, launching a boom in wide-framed spectacles purchases and a crisis in razor sales.

From there, the only way has been up: in 2011 a second album written and recorded in a hurry – Poveri Cristi [Poor Christ] (Vol. 2) – which met expectations, and then the birth in the same year of the Picicca dischi label, which he founded together with Simona Marrazzo and Matteo Zanobini.

"I'm absolutely fascinated by humanity in all its forms, outside the box, any kind of freak. Anomalies, non-conventional types" – he replies when asked what inspires his music. Not coincidentally he cites Ciprì and Maresco of Cinico TV, recorded in a black and white world populated by grotesque characters speaking broken Italian. If in Vol. 1, for example, we find Giovanni, who “has four teeth in his mouth, all rotten, but he smiles wide, especially at me” (L’imprenditore [Contractor]), on the second album – entitled Poveri Cristi, in fact - there's Mario, with his addiction to scratch and win lottery cards and slot machines, who fails in life as well as death, as when he tries to kill himself but pulls down the light fixture he tried to hang himself from (Il giovane Mario).

Humanity becomes the protagonist of his latest disc – Il Cammino di Santiago in Taxi [Compostela by Taxi] – an album about the paradoxes in its title, inspired by the true story of a  “lady” who, deciding to mix spirituality with comfort, actually takes a taxi on the Walk of Santiago de Campostela. Less ironic than its predecessors, the album depicts a lost world made up of little old ladies who dance and look for husbands on TV, of mistaken quotes, and elderly gentlemen courting 15 year olds. it's an album where the laughs aren't hidden but the junk is. But Brunori does not pontificate.

"When I criticise, I always put myself in the middle because I feel it's stupid to criticise others. Or perhaps those who don't feel like they belong in the muck and take themselves out, commit the gravest sin. The only important thing is to maintain a knowing critique without getting oneself hung up on everything that happens, which is a grindstone of  enormous, undifferentiated imput."

A while ago, Rolling Stone entited an article, "Music in Palermo is cool." Brunori Sas absolutely agrees: "We produced Di Martino on the label we started a few years ago, we have a close collaboration with Nicolò Carnesi, also from Palermo. I always follow Pan Del Diavolo, Simona Norato. I also really like Colapesce, who is not from Palermo but Sicilian.  Sicily – he continues – has always produced a great many artists. It's a land, with all of its contrasts, and all of its extremes, has always managed to produce a great quantity of talent and also stimulate it."

It's not only the music he loves about Palermo. "I'm fascinated by the places of extreme decadence it has, or the incredible situations, that I, growing up on the films of Ciprì and Maresco, had experienced only indirectly but can be geniunely real here."

And then the food. "What did I tell ya to do?" – quoting Donnie Brasco, he laughs.