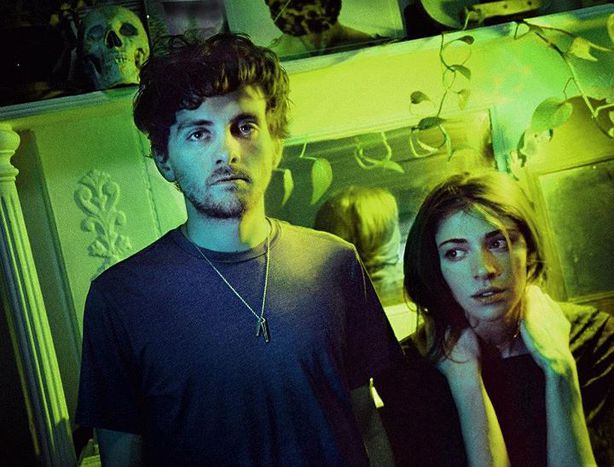 Patrick Wimberly and Caroline Polachek probably never thought their music would end up on a commercial for an apple product. After meeting the duo in Paris, we are advised to go back to the future, turn the sound down on a silent film and crank up our headphones to their fresh electronic pop offering

I stumble into ‘Hotel Amour’, the neon sign of which lights up the edge of Paris’ famous, if tame, red-light district Montmartre. I strain to catch an American twang which would give away the Brooklyn-based band Chairlift at one of the half-lit tables. After being pointed in the right direction by the barman, I literally bump into drummer Patrick Wimberly who is hurrying away to finish a photo shoot; the American band are in the French capital to play at David Lynch’s club Silencio. One espresso later, Patrick is back and seated across the table from me, pretending to set light to his moustache with an obligingly placed tea-light. Despite his jokiness Patrick seems to be unused to talking about himself, which is hard to believe given the tight line-up of journalists waiting to speak to him. It is only when the band’s other half, synth-player and frontwoman Caroline Polachek, joins us that the conversation starts flowing.

The band’s original aim along with former member Aaron Pfenning back in Colorado in 2005 was to produce backing music for haunted houses. Had they been planning to play gigs in their neighbourhood’s deserted houses? ‘It was supposed to be super commercial,’ explains Caroline earnestly. ‘We experimented with loops; this was going to be background music which would go under the real fright noises. It would be made to order – we were the people that Haunted houses inc. would come to.’ Is there a Haunted houses inc., I interrupt? She shrugs. ‘Probably.’

'We were the people that Haunted houses inc. would come to.'

The problem with their plan, Caroline explains, was that Chairlift kept writing songs over the background noise. The failed spook music became their first disc, Daylight Savings EP (2007), followed a year later by their debut album Does You Inspire You? Caroline defines Chairlift’s music as pop, but finds it ‘awful’ to be compared to indie rock. It’s not surprising the critics are confused, as the band’s songs vary widely: Territory wouldn’t sound out of place on a Bjork album, whilst the poppy Bruises is the band’s best-known song after being used for an ipod nano commercial in 2008 and scooping a 'best breakthrough video' at the MTV music awards in 2009. Only the loops and synth-backing which the group continues to play with seem to tie the songs together. ‘We’ve used a very strict palette for our latest album,’ adds Caroline. ‘The new album sort of explains the differences in the old album: it bridges the gaps and ties everything together.’

‘I’d suck if I studied music’

Chairlift, it turns out, is the pair’s second band together: Caroline and Patrick met at college ‘on my first day of school, when I didn’t know anyone,’ Caroline laughs. ‘I went to this cat power show and the opening band was amazing. I went up to them afterwards like a total geek.’ She widens her eyes and puts on a hollywood accent, ’Hi, I just wanted to say, your music is like absolutely awesome. If you’re ever wanting backing vocals I’d totally love to sing for you.’ She goes on, ‘I ended up at Patrick’s for a couple of beers and he showed me some tunes he was working on. I said, ‘wait, that part would be cooler if it were something like this’ and I hopped on the piano and played it. Patrick got on the phone and an hour later I was in the band.’ Patrick cuts in with excitement: ‘It was like that scene in Back To The Future where the main character is playing a guitar solo at the dance contest.’ He starts strumming away at an imaginary guitar. ‘You know? This guy from the other band picks up the phone, calls his friend and says, ‘you got to check this out, this is that fresh sound you’ve been looking for!’’

So both studied music? ‘I did, she didn’t,’ says Patrick and adds snidely, ‘She doesn’t know anything about music.’ ‘No,’ Caroline agrees frankly, ‘which is good because if I did I would probably suck, worse.’ Although this is hard to take seriously, it is this confident modesty which makes the pair so appealing. Caroline actually majored in arts, focusing on video arts, which explains the beautiful and often complex music videos the band produces. Indeed, it’s partly their videos which have brought Chairlift attention, particularly the 2011 single Amanaemonesia. Half-way through our conversation Caroline and Patrick launch into a list of ‘uses’ for their latest album Something, which is due for release in January 2012. ‘It is good to play in a roller skating rink with friends. It is good for contemplating second life with. It is good for gardening. It is good for headphones. It is good for putting a film on silent and watching it with.’ It is this playful, self-deprecating enthusiasm which marks the band’s approach to their music.