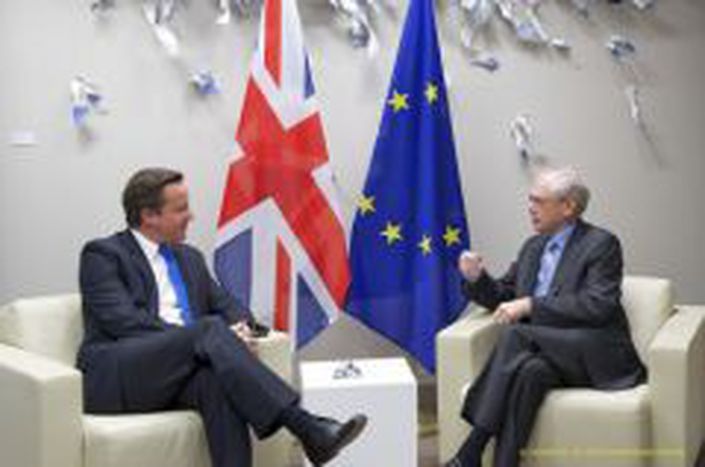 By Thomas Bignal A survey published by ComRes only a few weeks ago pointed that 54% of the British public were willing to leave the EU, a number far higher than their other European counterparts. How come the British people are so adamantly opposed to the EU that they would rather leave the Union as a whole, rather than play an important role from within?

Both two main political parties in Britain seem to have a rather broad spectrum of views regarding the EU. This was demonstrated by the recent cross-party rebellion made by MPs from both Labour and Conservative parties calling for David Cameron to reject a freeze and negotiate a strongly reduced EU budget for the 2014-2020.

However, it is clear to all that the Conservative Party includes a more Eurosceptic strand. Although David Cameron and his cabinet are generally against the idea of a withdrawal of Britain from the EU, an increasingly high number of Conservative MPs –influenced by the success of UKIP- believe this is the way forward and are calling for a referendum on the matter. The outcome might well be the UK leaving the EU if one was to rely on the latest survey as mentioned above.

The usual criticisms are often heralded by British politicians and media alike as a basis for their argumentation. These include its membership costs for little return, lack of democratic legitimacy, bureaucratic nature and so on. The problem is that this does not explain why these critiques -rightly or wrongly- are more widely accepted by the British public than throughout the rest of Europe.

Europe framed as an attack on Britishness, a vicious circle

It could be explained by the highly popular and emotional term of “Britishness”, so important to British politics, yet seemingly impossible to define. The decline of what was the British Empire led British politicians to emphasise the importance of their links to the US and to the Commonwealth and cast aside the significance of Europe. The fact that they do not necessarily need to be in opposition does not appear to have been taken into account. Yet many British politicians and newspapers appear to have used populist means –reducing the EU to an aggressor against British culture- in order to secure political gain or sell more prints.

This sense of aggression on “Britishness” by Brussels has also been reproduced and strengthened by a majority of the hugely influential British press –quality and tabloids alike- which is considered as far more Eurosceptic than their counterparts throughout Europe. This could explain why dangerous distortions can also often be found in the British press such as the statement that Brussels is forcing Britain to give up on its imperial measurements, a matter ever so important to “Britishness” and consequently to its people.

As such, the idea that the EU is harming what makes Britain so “British” has now become so widely accepted among public opinion that it has created a vicious circle encouraging British politicians and media alike to use this sensitive topic to score political points or boost profit, but consequently increase euroscepticism among British people.

Withdrawal from the EU would perhaps be mistaken but nevertheless understandable if the British public were also informed of the positive effects membership to the EU has or can have on the British economy. Yet, when discussing this issue with many Brits who share different political views, the main responses received are based on the idea that Britain is culturally different to Europe rather than on the economic and social benefits membership brings or not to British society.

Indeed, arguments regarding the actual added value of membership to the EU are never really mentioned by Eurosceptic politicians or the right-wing press and tabloids. How Europe positively contributes to the British response to modern cross-border challenges such as globalisation, climate change and terrorism is very rarely promoted. The same can be said about the importance of the single market or the costs both Switzerland and Norway have to pay to be included in it. The real impact of EU laws on British primary legislation (6,8%) is usually ignored or ill-explained.

A referendum could lead to the British people deciding that it is in Britain’s best interest to leave the EU, but a debate could also provide a voice for the pro-Europeans –a vast majority of Business and Trade Unions included- to express their opinions; a matter which is not often the case in the British Press. This could lead to a more balanced debate where British interest will no longer be simply reduced to the sentimental vision of Britishness, however important British culture is, but also to a rational debate based on how to create and protect British jobs in today’s globalised world. As such, the willingness to leave the EU as a whole as argued by UKIP and certain Conservatives, and not even try and negotiate from within, could well be the biggest loser if a referendum were to take place.