Breatharianism: The woman who eats nothing

“Living off love and water” doesn’t seem like enough to sustain oneself, but for Dominique Verga, it’s already a lot. The 50-year-old Liege native claims to have survived on nothing but love for the past three years. By nothing, we mean no food or water. She follows a ‘breatharian’ lifestyle, which she claims cured her of ill health. Scientists believe the lifestyle is nothing more than a scam.

The Liège air has never been a great draw for the public. Located nearly 100 km east of Brussels, the town of Meuse doesn’t really have the sex appeal of contemporary indie metropolises like Hamburg, Sevilla or Copenhagen. Yet, it is full of life. At least, that is what Dominique Verga thinks, who follows the ‘prana’ or ‘breatharian’ way of life. I met her in person following an initial Skype conversation.

"We are what we eat"

Dominique is small in stature with short, grey hair, but certainly doesn’t seem to be starving. She welcomes me at the Liège-Guillemins station. Smiling, she explains during the drive to her house that she lives on one of the seven hills that surround Liège. “Like Rome,” she says, before re-adjusting her gaze on the motorway.

We enter her house through the kitchen, and I’m surprised to see a basket of fruit and a pot on the stove. My confusion subsides when I see Dominique’s two sons, two young men, walking around the house. They haven’t yet converted to ‘breatharianism’. She takes me into a large room furnished with two white sofas, a massage table, a desk with a computer and some chairs. Paintings of the cosmos decorate the walls, entirely in line with the breatharian movement. Dominique explains that one of her sons painted them. Before we begin the interview, she hands me a glass of water and sits down in front of me. While she speaks to me, she often closes her eyes or looks around the room as if lost in her thoughts; “a way of connecting to the divine”, she explains.

Introduced in the West in the 1970s by American Wiley Brooks, breatharianism was largely disseminated by the Australian Ellen Greve, who also goes by the name of “Jasmuheen”. The basic premise of breatharianism is for its followers to stop eating and drinking, and instead try to reach a “higher” state through cosmic energy, also known as prana (the Sanskrit word for “life force” or “vital principle”, ed.). It’s a dangerous practice, which has resulted in the death of many of its devotees. Breatharian guru Jasmuheen has been quick to provide an explanation for this; according to her, followers didn’t adhere to the “master” teachings correctly, and their cosmic energy was polluted by “dangerous interferences”. She uses the same arguments to explain the failure of an experiment that took place in Australia, in which she took part. She was locked up in a room without eating or drinking and the experiment was broadcast on television. It was cut short on the fourth day, when the medical professional leading the experiment became concerned by her deteriorating state of health.

I ask Dominique to explain to me what she believes breatharianism to be, according to her principles. She begins her explanation with the term ‘breatharian’, which means a person who survives on cosmic energy (prana). “We are what we eat,” she says. “Everyone of us, including animals, objects and plants, is composed of energy and everyone has a relatively high vibrational rate. The higher the vibrational energy, the better. We are the energy of what we eat. If we eat meat, for example, our vibrational energy level will be very low because the animal probably didn’t have a peaceful life or death. We take on this negative energy. That is why we must pay attention to everything we put in our bodies.” 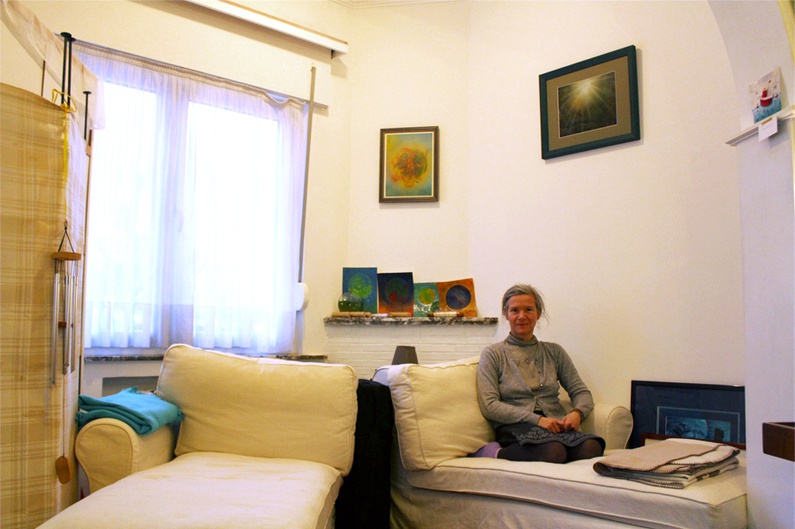 Dominique asks me to imagine a staircase: at the bottom of the staircase there are different types of meat. On the top step of the staircase, there are cooked vegetables. According to the energy principle, eating cooked vegetables is better than eating animals (or “carcasses”, as Dominique puts it), although eating cooked vegetables isn’t ideal because they lose some of their vibrational energy in the cooking process. Dominique aims to gravitate towards the top step: she has never eaten meat, and her only “error” was to eat cooked vegetables. Hunger is not something she has often felt in her life, according to her, and she managed to create excuses to avoid eating since childhood. Some would consider that to be a sign of an eating disorder, but Dominique claims that her decision not to eat is “entirely voluntary”.

After having worked as a consultant for a firm for 20 years, a job that she hated, Dominique became fell gravely ill. She spent several months in a psychiatric hospital, and she had had enough. “I was in a bad place (mentally) for several months,” she says, “I was taking a lot of medication. Then, one night, I received a divine gift; a voice told me to stop taking all of my medication. As I listened to the voice, I was filled with a sense of warmth, of light and pure love. It was the most memorable night of my life. By looking death in the face, I accepted that I wanted to live. As a result, I suffered from terrible pain, but my conviction was so strong that I persevered. The second night, I received a second message: the voice told me to stop eating. At that time, I was already barely eating anything, so I stopped eating completely.”

Dominique was contacted by the 'voice' for a third time, a few months later. The good news was that she was allowed to eat again, but she was restricted to a raw food diet. So, over the course of a year, she alternated between six to eight days of fasting and days in which she ate raw foods and drank plenty of water. After six consecutive days of not eating, she felt as though she had entered heaven. She claims that she had reached a higher plane, a higher state of consciousness, another dimension. "My body was completely healed. My doctors couldn’t understand it. A blood test was ordered but the results came back normal. I was experiencing a state of bliss, but my children were still worried about me. So I did a little research on the internet and I came across Erika Witthuhn, a fellow prana practitioner. I contacted her and she reassured me that I could live without drinking or eating, even sleeping - it was completely normal. So that is how I discovered the prana way of life.”

One year after she began the recovery process Dominique met Domenico Provenzano, the author of a book on breatharianism, during a prana festival. “He asked me: ‘Have you ever met god?’ It completely threw me. I finally understood that I had always been in the presence of the divine. I just hadn’t realised it.”

"By following the prana way of life, we accept that we are love," she says. "Reconnecting with the force of love allows you to heal any illness. When we are ill or we are scared, we are disconnected from the force of love. In order to live a full life, we must therefore reconnect with this force. It is this connection to the divine that reduces and suppresses the roots of all illnesses. When we are nourished by prana, our bodies vibrate at the highest level, which means that prana or prana nourishment is more beneficial to our health than any food is. It is important that our bodies, our energy, our minds, our emotions and our spirit are in harmony with one another in order to experience this state of consciousness. The pranic state is all about freedom and choice. I choose to drink or to sleep, but I don’t need to.”

"When you fill yourself with love, you no longer need to eat"

Though Dominique appears to have experienced a miracle cure, the same cannot be said for all prana followers. Many doctors reject the practice, stressing that it is not humanly possible to survive without food and water for such a long period of time. In an interview with the Nouvel Obs, the president of Miviludes (interministerial mission for vigilance and combat against sectarian aberrations) Serge Blisko, formerly a doctor, cautions against the prana movement, which some consider to be a cult. "You need only look at men and women suffering from anorexia or those returning from war, half starved, to realise just how absurd breatharianism is," he says.

Even Dominique condemns the practice of prana if it is done incorrectly. "You need to gain enough momentum to reach the pranic state." With Domenico, she is part of a group of roughly 20-30 people who run prana workshops. "When you fill yourself with love, you no longer need to eat. People have a need to fill the void with food, sex, sports or drugs, among other things. Even the act of eating can be pleasurable and can be used to fill the void. But this 'need' to fill a void is unhealthy. As you work towards reaching a state of prana, the urge to eat or drink gradually diminishes until you enter a state of higher consciousness and can accept that love will be a worthy substitute for food."

Dominique no longer works as a consultant. Nowadays, she is a Reiki master and teaches people who are suffering in one way or another the art of 'acceptance', to become independent and to connect with what she calls the “energy of love”. Dominique even organises a French pranic festival with workshops and conferences once a year. It’s a way of spreading the word about prana, and of expanding the network of 40,000 prana followers (according to Jasmuheen) across the world. The prana movement, however, is not looked upon kindly by everyone. It is closely monitored by the Centre for Information and Opinions on Harmful Sectarian Organisations (CIAOSN) in Belgium, which has observed the worrying rise in sectarian aberrations that exist in the health sector. The increase in the number of movements or cults such as the prana movement is worrying, especially for those who believe that such movements seek to exploit and pray on the psychological stress of the most vulnerable in society. Dominique doesn't see it that way: "When you are in the pranic state and the lines between the material plane and the spiritual plane become blurred, you are completely free and are no longer open to manipulation because you are no longer afraid, you no longer feel fear." Apparently.