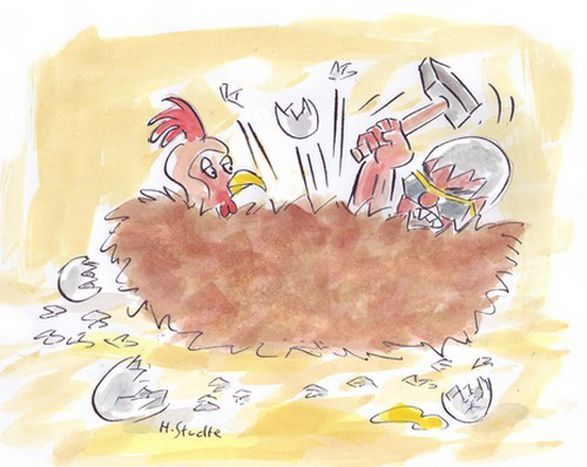 Breaking eggs in baskets or pulling rugs from feet?

It was an unpleasant wake-up this morning for Antonio Di Pietro, former MEP, leader of the 'Italia dei Valori' (Italy of Values) party and blogger. On the English version of his blog, we learn that the former public prosecutor is out of the running for secretary of the Democratic Party because it would have broken the eggs in the basket or avrebbe rotto le uova nel paniere, putting into question the balance of the new formation of the centre-left. The unintentional 'eggs' Ital-idiom hasn't escaped the notice of Ivan Scalfarotto, first round candidate of 'L'Ulivo' ('The Olive Tree') in 2005, who has lived in London for several years. He criticises the ex-star of Operation Clean Hands or 'Mani Pulite' on his own blog, highlighting amusing linguistic errors and creating a virtual polemic.

But what rural history is hidden within this popular saying?

The 'basket' in question is the one in which hens incubate their eggs for twenty days. This is why 'to break the eggs in the basket' means to destroy a plan or patiently prepared project. In English, the corresponding expression is to pull the rug from under one's feet, equivalent to the Italian tagliare la terra da sotto and the French couper l'herbe sous le pied. In German, the metaphor is culinary. Jemandem die Stuppe versalzen means literally to over-salt one's soup. As for the Spanish, despite their rich gastronomic tradition, they use just like so many other people the expression cortar las alas, or to clip the wings. There's nothing to say for it. With these blunders, our Tonino has clipped his wings all by himself.