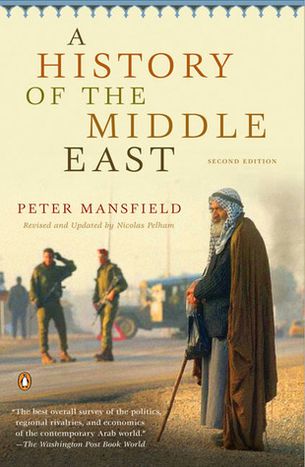 Book Review: A History of the Middle East

This information tells that the children who suffered the years of hunger were raised by the fierce revenge. It is not a surprise that the generation born in 90’s is quite radical in Middle-East today. When their parents and brothers were killed by bombs, starvation, disease or torture, the survivors were left with only one soul: Allah. The world left them no other choice.

The cliché mostly follows the script below:

The reader goes to a bookstore or library, picks the book from the shelf. She or he takes a look at the back cover and decides to get the book.

My meeting with Peter Mansfield’s book was a bit out of the script. I was walking the streets of Oslo (Grünerløkka district) to leave some tourist friends at their rented apartment. And next to their door, there was a typical IKEA bookcase probably left by a neighbor. A History of the Middle East was just lying on one of the shelves. Waiting for his next reader… Simply, I took this abandoned book with me, filled it with my notes while reading and now, I am writing its well-deserved review.

Journalist and historian Mansfield starts the journey as soon as the Sumerian invented the essential fuel of history, writing, in Mesopotamia and he tells us about all critical breakpoints of the Middle-East history. Mansfield’s hard work helps filling the missing stones for even someone like me who was taught history classes for many years. Because, like most countries on Earth, our states did not -and certainly still do not- let us know all about the past. This does not mean that we should quickly accept all claimed by Mansfield, but right here, the beauty of learning starts.

“The important thing is not to stop questioning. Curiosity has its own reason for existing.”

Luckily, Peter Mansfield’s book forced me to question many things, including some of the knowledge he provides. Unfortunately, many pages quickly touch upon quite argumentative topics. These paragraphs rapidly tell you what happened in the past and does not leave an ajar door for ongoing discussions. His strict and hasty judgment may make up the minds of inexperience readers to the Middle-East history.

“The Turks were not conquered by the Arabs, but they were largely converted to Islam in the tenth century, and their language was invaded by a stream of Arabic words from the vocabulary of religion, science and culture.” (A History of the Middle East, page 18)

We cannot totally agree with his concrete looking information above. There are many studies which indicate that the Turks were threatened or partly invaded by the Arabs. Especially, Scholar Turan Dursun’s works are remarkable for this discussion. Below is another argumentative quote:

“Throughout eastern Anatolia (Turkey) the Turks were threatened by the insurrection of their embittered Armenian subjects, who disrupted communications and formed volunteer groups to help the Russians. Others joined the Russian Armenian forces. The Turks took a terrible revenge by ordering the deportation of the entire Armenian population from eastern Anatolia to Northern Syria. Hundreds of thousands were killed, and many more died of hunger, exposure and diseases.” (A History of the Middle East, page 150)

I wish Peter Mansfield was alive today. I would like to ask him the following questions:

The examples similar to the above caused me lose my passion on Mansfield’s work, but he manages to restore all the respect with his enlightening sentences.

“He (Ibn Saud, the first monarch and founder of Saudi Arabia) showed wisdom in many respects. Although he remained the supreme ruler, with overwhelming prestige, he never ignored public opinion. He was determined that his kingdom should have those Western inventions which would make life easier for his people… A gathering of religious shaikhs was convinced that the telephone was not the instrument of the devil when they heard on it a voice reciting the Holy Koran.” (A History of the Middle East, page 187)

Mansfield also changed some of my opinions about the roots of radicalization. I was keener on seeing the fundamental views of Islam as the primary cause of Islamic radicalization, however understanding the dimensions of the public torture applied by the cooperation of Saddam Hussein and Western Sanctions put me question things differently.

“By 1997, some 7,000 Iraqi children were said to be dying each month of hunger and disease because of the sanctions. ... The Iraqi president even cut birthday cakes on television at a time when his people had not seen sugar for months. ... Asked on American television whether the starvation of 500,000 people was justified, US Secretary of State Madeleine Albright declared it was 'worth it'.” (A History of the Middle East, pages 346\349)

This information tells that the children who suffered the years of hunger were raised by the fierce revenge. It is not a surprise that the generation born in 90’s is quite radical in Middle-East today. When their parents and brothers were killed by bombs, starvation, disease or torture, the survivors were left with only one soul: Allah. The world left them no other choice.

In conclusion, A History of the Middle East is a must-read book for anyone who aims to build a career in Middle-Eastern politics. Peter Mansfield will fill the missing stones in your minds.