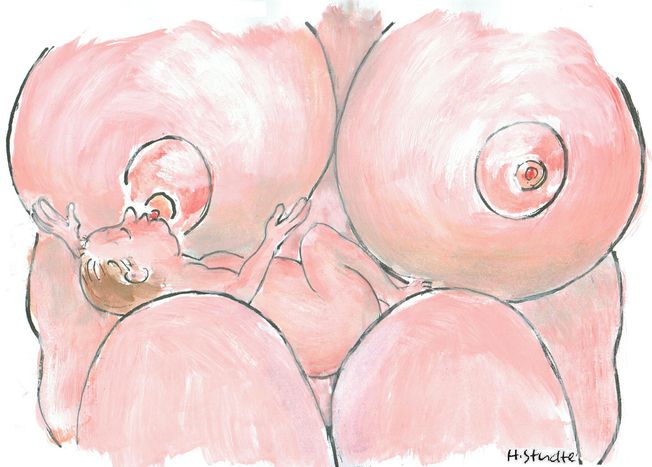 When the French refer to a curvy woman's best assets, they note that 'there are a lot of people on the balcony', whilst the Spanish remark that a woman has a 'great breast-onality'. Eyebrow-raising expression of the week

Breasts have long been objects of fascination, a symbol of femininity in European culture. As well as being instruments of enchantment, they also have a nutritional function since each one of us suckles them at birth. But apart from sustaining us from the cradle, they also nourish our inspiration. When breasts boggle our minds, we are suddenly dumbfounded, rendered dumbstruck… and we become babies again.

The Creator failed miserably when it came to naming an abundant bosom. The nutritional aspect of the breast has led to many common European expressions related to feeding. Italians refer to the breast's ability to give milk: Ha una latteria sotto il reggiseno (she has a milk factory). Like the Brits, the more vulgar Spaniards get right to the point and compare chests to large fruit: tiene un buen par los melones (she has a good pair of melons). But following a small debate, the Spanish now prefer to take the female personality into account with the expression tiene una gran pechonalidad – the words pécho (breast) and personalidad (personality) combined. You make do with what you have, or not - in August, the Avilés beer festival in Asturias, northern Spain, had its campaign poster censored after depicting a cartoon waitress serving beer - sporting a big so-called 'breast-onality'.

In Germany and France, you are more likely to hear architectural terms. The French say il y a du monde au balcon (there are a lot of people on the balcony) to describe the structure that an ample chest might appear to have. The blunter, nature-loving Germans say that there is plenty of timber in front of the hut (Sie hat viel Holz vor der Hütte). A chest does provide ample heat, after all, and staring at them even provides a longer life, according to German researchers in 2009. You know what they say: an eyeful a day keeps the doctor away...

In any case, big breasts have moved us for quite some time, and disastrously so for the Iranian clerics. In late April, Ayatollah Kazem Sedighi argued that cleavage provoked earthquakes. The English, who admire a nice rack, often use the word boob to denote an idiot or idiotic action – here they would have said that the cleric had made a boob of himself. Indeed, American blogger Jennifer McCreightwent out on a limb to prove it; she launched a Boobquake action day to encourage women to get their best assets on show and try to cause an earthquake on 26 April. The title of the campaign? 'Lethal weapons'.