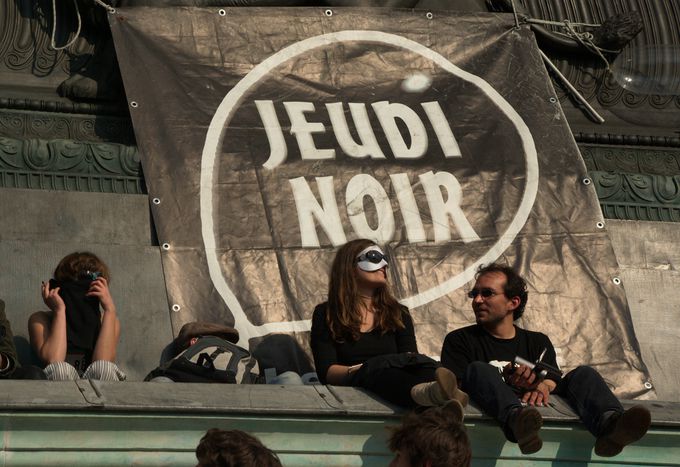 Paris - the city of romance, the city of rents. Over the past decade, the cost of renting in the French capital has risen by 50%, while thousands of homes lie empty. Jeudi Noir, which means Black Thursday, is a group of young French activists who are moving in: for the past few years the collective has been occupying vacant apartments in the city

The French documentary Squatters ('Ainsi squattent-ils'), which was released on 5 June, follows the activists as they strive to widen the field of battle. Jonathan, Élise, Stéphane, Romain, Margaux and Julien live in Paris. They are not the kind of people who normally have difficulty finding somewhere to live - or so you would think. In fact, all of these young people have been thwarted by skyrocketing rents and the mountains of paperwork deemed necessary in order to secure a rental agreement. They cannot rely on pocket money doled out every month by their parents or a job that guarantees a stable income; squatting is their solution to rising rent prices. 'Yes, it's completely illegal. But it's legitimate,' they claim. Squatting doesn't only mean occupying an empty residence without permission – for the collective Black Thursday, reclaiming vacant buildings goes much further.

'I wanted to explore the universe of squats because they are on the margins of towns, on the margins of the law even,' proclaims Marie Maffre. 'It is in the margins of our school books that the craziest and sweetest dreams are drawn, those dreams that give our lives colour. The documentary-maker followed the young activists of Black Thursday for two and a half years; the resulting film explores the reality of their life as activists. 'In the places they occupy, they create a community operating outside of market forces and the systems that govern society.'

The dark, often shaky images captured in Marie Maffre's 90-minute film give the spectator an intimate insight into a universe of idealistic struggle against the status quo. The activists' dream of creating a life of solidarity against the backdrop of a self-governing, democratic community is threatened by the reality of their surroundings. There is no running water in the rooms at the Marquise - a private hotel on the wealthy mansion-lined square place des Vosges that was occupied in October 2009. They also have to deal with plumbing problems, as the pipes have not been used for decades, build dry toilets and make a cleaning rota. Marie, who is a friend and confidant to the group, captures it all with her camera: the day-to-day life in a building that has been uninhabited for forty years, personal problems, the group's meetings, the permanent threat of expulsion, the fear and the arguments when people don't stick to the cleaning rota.

We witness the adventure of reclaiming a building belonging to the Axa group near the presidential home, the Élysée palace - the enthusiasm, the celebrations, the sense of community and friendship. We see the group being turned out of their 'home' on 23 October 2010, after occupying it for a year. We see it again when the police come to clear out the house on the posh avenue Matignon in February 2011, less than two months after the group had moved in. The film offers us an insight into their disappointments, their discouragements and their determination to continue the fight.

Marie Maffre's documentary is undeniably a project borne out of passion: the filmmaker works her way into the heart of the group to ensure that the young squatters' voices are heard. Black Thursday are 'vulnerable young people, students, freelancers, fixed-contract workers unable to find long-term jobs, unemployed people, single parents,' reels off Julien Bayou, the group's co-founder. For young people unable to find a place to call home, the Thursday of the title refers to a black day of searching hopelessly through the classified adverts, a day which in France has given rise to the 'galley slaves of the housing sector'.

The members of Black Thursday campaign for improved housing conditions for young people. As they are more likely to move around and often need to live in cities, young people are the worst affected by the housing crisis. At the end of the month, they find themselves forced to pay a large part of their salary into the coffers of their parents' generation. 'Squats would not exist if we were not going through such a major housing crisis,' says Maffre. The final word goes to Black Thursday: 'We are the first generation to be less affluent than our parents or grandparents.' And now, back to the studio.

In France, 2.3 million homes (around 7% of residences)  are lying empty. In the Ile-de-France region alone (home to Paris), there are 329, 000 empty homes, of which 70% are in the capital and its suburbs. The French housing charity Abbé Pierre foundation claims that there are 3.6 million vulnerably housed people in France. 1.7 million applications for social housing are waiting to be processed (Sources : Le Parisien and Fondation Abbé Pierre)