Birgitta Jónsdóttir talks about poetry, freedom of online information and her work with the Icelandic Modern Media Initiative

by Natali Lekka, freelance translator, writer and a member of the Association of European Journalists. 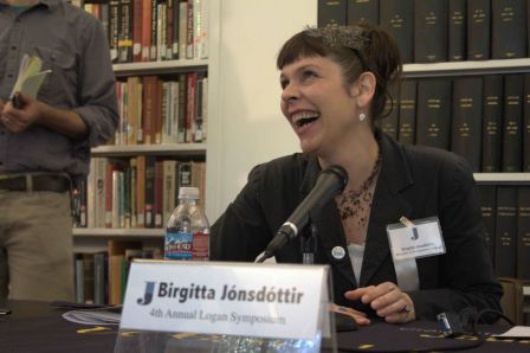 Poet, writer, artist, editor, publisher, activist, internet pioneer and a Member of the Parliament of Althing – the Icelandic Parliament, Birgitta Jónsdóttir’s multifaceted personality and uncurbed enthusiasm often makes headlines for her commitment to international projects that keep on beating the drum for political transformation and freedom of information. I met her in Athens, this year, at a workshop on ‘Media Policies and Regulation for Media Freedom and Independence” that had been co-organized by the Greek section of the Association of European Journalists and the Hellenic Foundation for European and Foreign Policy.

But Birgitta Jónsdóttir has not always been a politician. Her career as a parliamentarian began in 2009, following the financial meltdown of her own country in 2008. Prior to joining the ranks of statesmanship, she had been a successful poet, artist and publisher. At 22, she published her first poetry collection, under AB Books, Iceland’s biggest publisher. She then went on to participate in several international projects involving art and poetry, such as “Poets against the War", "Dialogue among Nations through Poetry" and "Poets for Human Rights" among others. I want to know how she views poetry in a world dominated by technology and if, in her opinion, it is possible to use poetry as a common language to make a worldwide statement.

“Poetry is already a common language,” she tells me, “especially poetry woven into music. Many of our greatest modern poets are or work with musicians: Bob Dylan, Leonard Cohen, Nick Cave, Suzan Vega, Kate Bush, Sinead O'Connor, Ron Whitehead, Heather Haley, Bob Holman to name but a few. If poetry wants to be part of a common language, poets need to write in a way that common people can understand and feel it, as part of their own reality. Many poets have evolved through the Internet and I hope the two will carry on evolving together. One of the beautiful things about the internet is that poets have been able to work together, beyond borders, on many important projects like the ones mentioned above. It is also important to note that technology would not have evolved, had it not been for creative thinking.”

I am curious to find out what made her decide to join politics. “The general climate in Iceland, prior to the financial meltdown in 2008, was that of apathy,” she explains. “Egoistic behavior was dominant. We lived under the illusion that money and material things could make us happy but that climate was propagated by the media and all those who wished to “bank” on this illusion, in order to maximize their profits. After the third largest financial meltdown in the history of the world, the nation of Iceland finally woke up to the brutal reality that they could no longer rely on the institutions that make up a democratic society. Everything had failed them and so numerous grass root movements began to emerge.

“One of my tasks,” she continues “was to help gather these groups under one umbrella for joint actions. Through that process we created “Solidarity” – a coalition for these grass root movements. This coalition evolved into ‘the Movement’ – (the current political party in Althing). The aim was to form a political movement to run for parliament by creating a manifesto that would tackle the main issues many felt needed to be solved in the wake of the crisis. Democratic reform, severing the ties between the corporate world and the state and financial justice to all those severely affected by the crisis were some of the issues on the agenda. We were formally created 8 weeks prior to elections; we had no money but we managed to get more than 7% of the votes.”

And how does she feel ‘the Movement’ has contributed to her country? “We have managed to inspire other parliamentarians to work together on important issues. We have always had it as a guideline to work differently, to move the boundaries of the norm so that others could take the necessary steps of change. We see ourselves as activists within the establishment. As a movement, we try to get people to be more active, we battle against the trend of socializing private debt and encourage the nation to have their say in the making of our own constitution, through openness, transparency and the right for a national referendum; the latter in relation to Icesave (a diplomatic dispute which began in 2008 between Iceland, the UK and the Netherlands.)

A jack of all trades

Birgitta has her fingers stuck in a lot of pies. A “jack of all trades” as she calls herself, she has been described as an internet activist and a pioneer. She is famous for her fight for freedom of online information as well as for her groundbreaking activities back in the early days of the internet. “I was the first Icelandic poet to use the internet as a testing ground and a publishing venue,” she says. When she got the idea back in 1995 to organize Iceland’s first live video broadcast, everyone said it was impossible. “Well…I like impossible tasks,” she adds with a smile. “I also created Iceland´s first virtual gallery for Apple in Iceland. I fell in love with the internet when I dove into it, in early 1995, and saw its potential to make our offline world a better reality.”

And what about her work as an ex -volunteer for WikiLeaks? “Wikileaks managed to put the issue of freedom of information on the agenda,” she explains. “The world will never be the same again. Whistleblowing is now an option again, at times when the corporate sector has managed to find loopholes to stop information that should rightfully remain in the public domain from reaching mainstream media.”

Her work with the Icelandic Modern Media Initiative (IMMI)

The Icelandic Modern Media Initiative is a law that intends to make Iceland a safe haven for freedom of information, speech and expression. The proposal, of which Birgitta had been the chief sponsor, was unanimously adopted by the Icelandic Parliament on June 16th 2010. Today, IMMI is working towards rethinking media regulation for the digital age. It is an effort to protect freedom of the press the world over, by researching best practices in law and promoting their widespread adoption.

“According to Transparency International, Iceland ranked at the top of the index as the least corrupted country in the word,” she tells me. “American credit rating agencies bestowed Iceland and its banks with a triple-A rating prior to the financial collapse, when nepotism and corruption played a significant role in the country’s collapse.

“From this, we easily draw the conclusion, that you cannot really trust data that is controlled by either the state or corporations, unless it is raw data that has not been manipulated by the corporate world or the state. In order to battle this trend of misinformation, it is obvious that we need more transparency as well as stronger foundations to support basic democratic functions, such as freedom of information, expression and speech. That’s where IMMI comes in.”

Many would argue that countries should have the right to protect their sources, in order to maintain their sovereignty, I tell her. “Sources should be protected no matter where they come from,” she explains. “It is of course possible to make information available and protect sources at the same time. The culture of secrets needs to be reversed into a culture of transparency. So much has become secret by default. That is simply not healthy for democracies. Nothing should be secret by default except privacy related material. We can easily create processes where countries can decide what to keep as a secret and what not. We need to ask ourselves though, what we can justifiably keep as secrets; once we start that process we will realize that it is not that much. Personally i don't feel we should keep war crimes or corruption under the shield of secrecy.”

The question is on the tip of my tongue: what can IMMI really do to protect bloggers from China or journalists based in Egypt, where laws concerning freedom of speech are stricter and far more restricting?

“There are two main threats that need to be addressed,” she tells me. “Lack of civic rights in cyberspace in relation to our private content online, and outdated legislation when it comes to freedom of information, expression and speech. We can offer a shield for their content and ensure to keep it online, but we cannot protect them from their own governments.”

” I always see light at the end of the tunnel…”

We live, no doubt, in an era of social unrest. I want to know what Birgitta feels and thinks about the years to come. “I always see light at the end of the tunnel,” she says. “We live in a period of tremendous changes but we should always embrace crisis as an opportunity for real change. It is however of uttermost importance to stress that no real changes will occur if we don't change our ways on an individual basis; we have to allow the (r)evolution to take place in our own heart and ways. All individuals have the capacity to change our world. The 21st century will be the age of the common people, of you, of me, of us. It won’t happen without everyone putting some effort into co-creating our societies.

“I don’t see myself as Icelandic, nor European, but rather a citizen of this planet. We all live on the same planet. Without it, we would be nothing. I have always been amazed by the insanity of borders and walls to define peoples. We are all the same – we dream the same dreams, we have the same desires for happiness. If someone is suffering, we are all affected. If our neighbor's house is on fire, we should help put the fire out, or the fire will leap over to our house.”