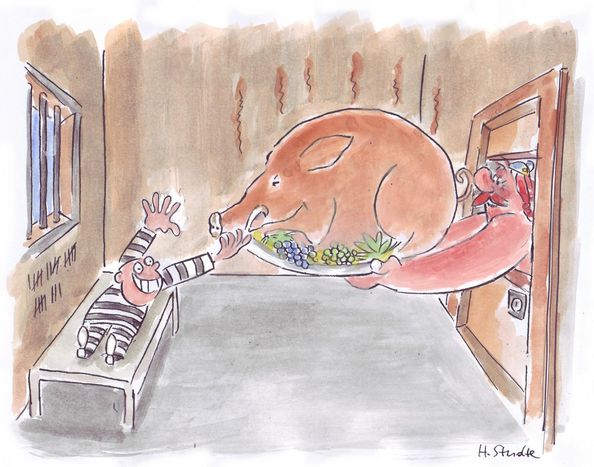 You can be as hungry as a wolf, pig or blind dog in Europe

The German word for ‘diet’, Diät, is not offensive. The French word régime is more closely adapted to reality, as it sounds so close to how the government runs. Armed with calorie tables and an iron will we kick off the battle against the monstrosity which hides in our entails. First it contracts and then it pinches us - ostry głód - hunger pains, as the Poles say.

The Poles have ‘wolf hunger’ (welczy głód), like the French (une faim de loup) and the Italians (una fama da lupi). Meanwhile, it’s the bear who rises in German stomachs (Bärenhunger). In Spain you can be hungrier than a blind dog (se tiene más hambre que el perro de un ciego) or collapse (desmayar) from hunger. In Italy, hunger can leave you blind (non ci vedo dala fame) or you can be as hungry as a pig (una fame porca).

This voracious internal feeling is what guides us towards the fridge at midnight and which pops up when we want to avoid snacking. The French say fringale (a medication formerly given to horses to stop them being hungry), which becomes avidez in Spanish or the munchies in English (the cravings you get, above all after having smoked a bit of cannabis). What’s certain is that the suffering victim will gobble anything down without abating.

Nevertheless, it’s equally dangerous if you resist hunger too much. The desire to overcome the temptation can become a habit. That’s why in France since recently it’s considered a crime to ‘incite’ anorexia (l’incitation à l’anoréxie).

Prison is another ballgame. Who’s going to be watching your calories when all you can do is eat what you’re given? That’s why in eastern Germany they say ‘Mann hab’ ich Knast, ich könnt ein ganzes Schwein verdrücken!’ (‘Man I have prison, I could eat an entire pig!’).