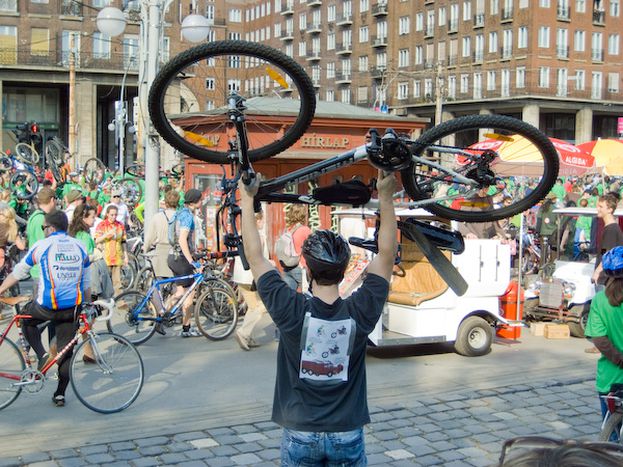 Biking is trendy, politics is not in green Budapest

Resistance groups may be fighting pollution in Budapest, but there’s a long way to go from holding bicycle protests to creating a political impact. How can ecological thinking blossom in the Hungarian capital?

‘Biking city’ – the two words run like a slogan. You’ll find it on t-shirts, computer screens, internet cafes, posters, even sometimes even on souvenirs that are bought by tourists. Budapest could well have chosen a bicycle as its national emblem. Not to mention that there were tens of thousands of bicycles that rushed into the Hungarian capital city on 20 April, ‘Earth day’, in a bike demonstration on the city's tarmac. 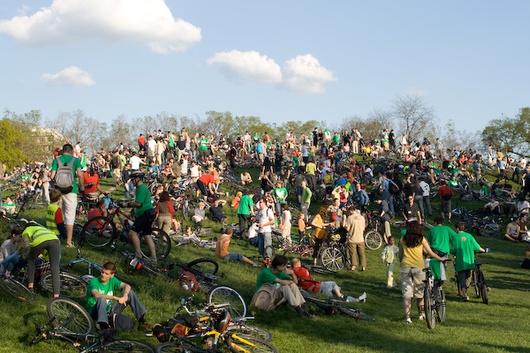 Launched in 2004, this spontaneous cyclist traffic jam, or ‘critical mass’, brought together 50, 000 participants in 2007. The world record was beaten according to organisers: ‘It's now a cool thing to ride a bike,’ Gabor Bihari says. He is 38, and one of the fifty very active members of the organisation. ‘Symbols of affiliation to a political party are not authorised; we wear clown-like and funny costumes, and we will cycle in November to support this cause.’ According to him, for three years until 2007, the number of cyclists doubled every year in the city. ‘Ecology is successful because it is a concrete commitment that unites several segments of society. It is more constructive than politics-related divisions. We grow up from there. We heal socially,’ he says.

But heal from what? From pollution first, that heckles the city's nerve center, nested on the edge of the Danube. Facing the huge Buda, an upper-class hill full of trees, Pest’s urban centre stinks. The Hungarian capital's air quality is at a medium level, compared to other European cities. But the micro particles' level (PM 10 and PM 2.5) and that of nitrogen oxides are still too high. They are over the norms established by the European Union: in 2005 and 2006, Budapest spent 160 days and 105 days in 2007 considered as dangerous for inhabitants. At 85%, cars are responsible for this air pollution, as they reign over the city and are taking away its green areas. ‘In hyper-down town, there's only half a square metre of green per capita,’ says Kristin Faurest, a British urban planner who lives in Budapest. This performance is very low if we compared it to the 10m2 recommended by UNESCO in urban centers, and to the 2.5 m2 in Paris. 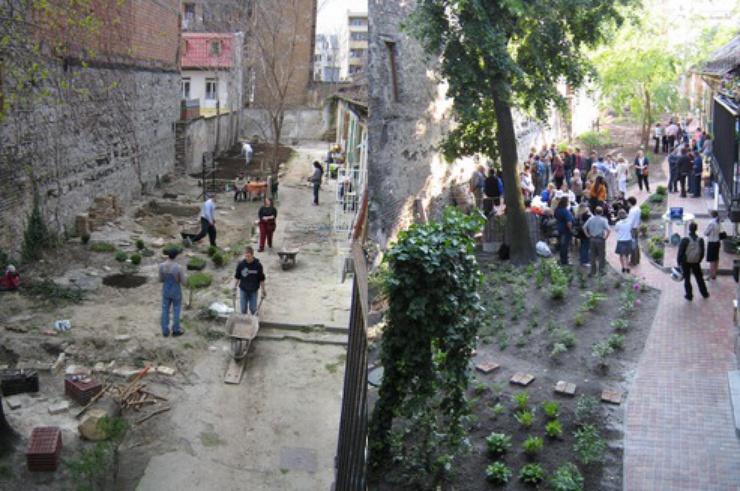 Budapest is also healing from divisions that are giving political life a rough time. Hungarians are experiencing a period of disillusionment. In a strike launched by Budapest's public transport company on 18 April, there were no buses, cars nor metros: as far back as Budapesters can remember, this has not happened in the past ten years. And as the ‘no’ vote won in the referendum on the financing of healthcare and education at the beginning of March, it was a huge blow for a ruling socialist party that is divided and corrupt for many left-wing militants.

To them, the ecologic commitment could be the cure to these symptoms. It could be a way to remobilise an embittered society. For example, in Budapest, when green spaces disappear, inhabitants have to get a pick and some seeds to recreate them in their buildings, whose corridors and balconies face a collective patio. Some ten gardens emerge here and there, instead of concrete. Kristin Faurest rejoices; she has written two books about the art and the way to grow plants in urban districts and on walls. ‘It is becoming really trendy here,’ she adds. 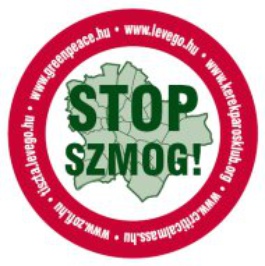 What remains to be done is to transform this trend into a durable mobilisation. This is no easy task. ‘People are increasingly conscious about environmental and pollution dangers, but they hardly change their habits,’ says Erzsebet Beliczay, vice president of the Clean Air Action Group, one of Budapest's largest environmental associations. ‘The number of car owners is growing at a rapid pace with the urban spread. And politicians are not conscious about these problems. Evidence of that is that public transport is very expensive, as expensive as in Brussels or Zurich.’

At the end of March 2008, a young coalition of associations met under the name ‘stop szmog’ (smog), to denounce the government status on transport policy. On this ground, the idea of a tax at the city's borders, notably for large trucks, is on its way. It is also about mobilising inhabitants. ‘We are going to organise a picnic on the Danube's bank, where cars drive, to show what the city would look like it the edges of the river were a pedestrian site,’ says Vay Marton, head of development for the Vedegylet (‘protect the future’) association. Vedegylet has made its mark in Bartok Ut, in a typical Budapest building. ‘This coalition's potential is really big, thanks notably to the cyclists' movement. The ‘stop smog’ slogan can last in the long term because it is not only ecologic, it's also about the residents’ quality of life,’ continues the militant, with a cup of organic herbal tea in his hand.

His association, which has around ten employees, has a very favorable public opinion. Not to mention larger scale projects: after having expressed its opposition to the installation of a NATO radar in Zengo, its members pushed a vote on the creation of a Republic's mediator position dedicated to ‘future generations’, an ombudsman with very broad responsibilities. They even managed to have their founder elected. Hungarian president!

With no party affiliation, and connected mostly with civil society, László Sólyom was elected in 2005 and only has a honorary role. But he is the country's green president, the leader of a world movement of green presidents on earth, one of the founding fathers of the new Hungarian democracy. László Sólyom did not hesitate to participate in the bicycle demonstration in 2007, and was even accompanied by ‘two bodyguards on a bike,’ Gabor Bihari recalls, smiling. A bicycle amongst others is a significant encouragement for local ecologic associations. 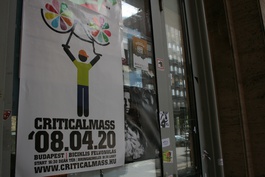 With this kind of support, the strategy of a hard associative core is well under way. These young activists draw their origins in ecologic militancy during the eighties. At that time, the environment, notably the building of a hydroelectric dam on the Danube, mobilized all opponents to the Soviet regime in a large ideological panel. Today, the project is underway to create a new party that would be committed to national politics, ecology and liberalism. Around 150 people meet regularly to develop an enthralling idea that has been planned for several months. But budgetary questions are the bottom line. They could compromise the main objective the greens have, as their dream is to have a candidate for the European parliamentary elections in 2009.

Either way, nothing will be done without a popular base and its massive support. Militants are remaining grounded regarding their capability to mobilise Hungarians around the ecologic cause. ‘Riding a bike is a trend. Politics is not,’ Kristof Szombati, a Vedegyelet activist, says, questioning the cyclist movement. But he remains optimistic. ‘Several groups communicate and are getting organised today. But this takes a lot of time. I am feeling the beginning, the symptoms of an ecologic thought.’