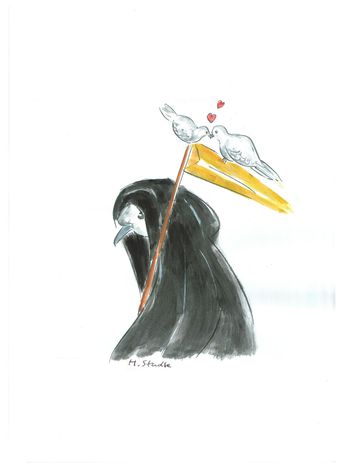 Doves and pigeons are one and the same except that the former got the 'symbol of peace' gig and the latter became the grey critters affectionately known as ‘rats with wings’. Whence the flight of fancy?

Although bird watchers know there’s no real difference, linguistically there are nonetheless two types of pigeon in the United Kingdom. Small white doves are let loose above wedding crowds or by activists at anti-hunting rallies, posing as peace symbols. Then there are the town-dwelling feral pigeons; it would be rather less appropriate were they to have olive leaves in their beaks. They wouldn’t hang around for long, not if English stool pigeons were around anyway, which is a term to describe informers who blow the whistle on others to the police. In French, the phrase ‘being pidgeoned’ (se faire pigeonner) takes the pigeon's human criminal character further, as it means you are being ripped off. When the Gauls are not busy being financially exploited, they become ‘someone’s pigeon’ (le pigeon de quelqu'un) or someone else’s slave. It rather aptly refers to the pigeon's historical role during both European world wars as message carriers.

The Germans would rather use the pigeon to limit their ambitions and be realistic when they prefer a Spatz auf der Hand, als die Taube auf dem Dach - it is  literally better to ‘have a sparrow in the hand than a pigeon on the roof’. (Ironically, the English sparrow was recognised as a ‘pest’ in 19th century America, before the pigeon took the 20th century gong). The Italians share this realistic mindset with the Brits, though whilst in English we don’t stigmatise the pigeon when we state it’s better to kill two birds with one stone, our Mediterranean friends do: prendere due piccioni con una fava.

The Spanish just can’t make up their minds. The Argentinean singer Andrés Calamaros’ song Paloma (2009) cemented the popularity of 'Pigeon' as a girls’ name in the Spanish language. Yet palomas are among the most unpopular urban animals here: ‘There are no animals worse than pigeons and cats’, goes the Spanish saying (Serrano, paloma y gato, no hay animal mas ingrato). Wow, talk about putting the cat among the pigeons (stirring up the debate).

No matter the many differences between Europe’s birds of a feather, pigeons are predominantly seen as pests and are often 'clay pidgeons' or easy targets. The English and Spanish expression rats with wings (ratas con alas) is a mediatised phrase which originated in the New York Times and increased in popularity during the nineties, according to one study. Berliners and Venetians are disgusted by the ‘rats of the air’ (Ratten der Lüfte) or ‘rats of the sky’ (ratti del cielo) in their Trafalgar Squares - which are Alexanderplatz in former East Berlin and St Mark’s square - while the French simply refer to the swarm as 'flying rats' (rats volants). There’s even a name for pigeon-fearers, who are said to suffer from peristerophobia. However, perhaps it is best to put the matter to one side: in the pidgeon-hole.