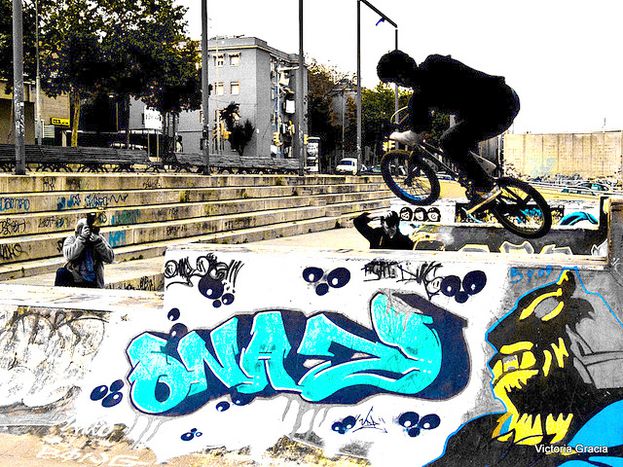 Beyond Gaudi: exposing the gateway to Barcelona

It was the birthplace of the most vibrantly colourful movement in architecture, it is home to the spires of the unfinished Sagrada Familia and Parc Güell. This is the public face of the Catalan capital, the one which is promoted by the city council and which acts as a magnet for tourists and residents. But which city are they talking about?

We travel around the concrete tower blocks and the suburbs, meeting the people of the other Barcelona

Ciutat Meridiana is the first neighbourhood that greets visitors approaching the city from the motorway. It's part of the district of Nou Barris and is literally jammed into the edge of the Collserola mountain range. It's the architectural epitome of former dictator Francisco Franco's policy of economic development: quantity not quality. It consists of flats and more flats, all one on top of the other, without order or logic. This is how the Franco regime's so called satellite towns came into existence.

Not a single suburb escapes stigma 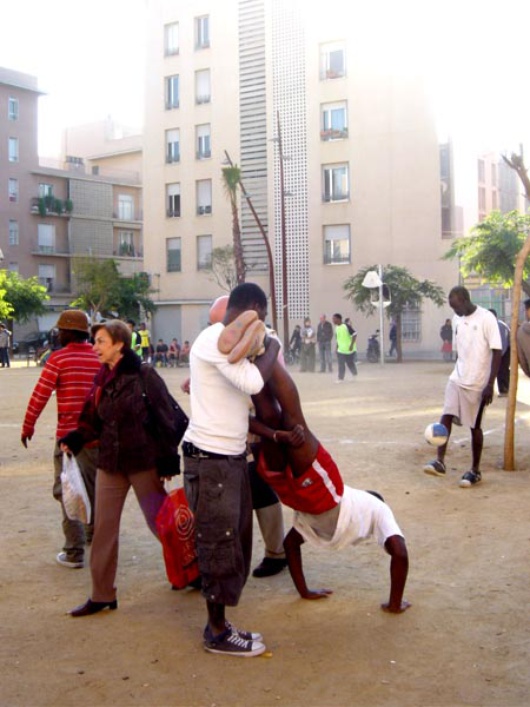 At first Ciutat Meridiana was destined to be the city's new cemetery. However, it ended up as a neighbourhood that absorbed waves of immigration from the south in the sixtie. Manolo Martínez has been living there since he arrived from Cordoba in the south. 'We came at the end of the sixties. Almost all our fellow residents arrived at the same time, and we set up home where we could.' In the early days, the area swelled with young people searching for a better future. They were just like the young people of the so called second wave of immigration who arrived from Latin America or North Africa. Immigrants represent 40% (4, 467) of the total population (11, 121). Many of them have opened small businesses and the streets are packed with greengrocers, hairdressers and small food shops.

From the heights of mount Tibidabo the outlook is very different to what you experience walking through the streets of Ciutat Meridiana. One of the most exclusive parts of Barcelona, Pedralbes, is situated at the foot of the Collserola. But there's no chaos or seventeen storey buildings. It's a ghetto of sorts, and from here it must be difficult not to stigmatise the citizens on the other side. They certainly haven't walked Ciutat Meridiana's steeply sloped streets, nor have they sat on Red Square (which takes its name from the actions of the trade unions in the late Franco years). But the image of Ciutat Meridana is clear to them: drugs and violence. At least that's what they've heard. It's even rumoured that the city is lawless and the police don't dare set foot there.

Creation of a ghetto

As the neighbourhood is a ghetto, there are no services to connect it with the rest of the city. Or perhaps the area became a ghetto because there are no connecting services. Juan Castillo, who has lived in Ciutat Meridiana for forty years, would take the bus every morning. 'If you missed the 5am service you had to walk as far as Sant Andreu. It was the only bus in the area.' In the last ten years the area has undergone a major change, as it now has two stations on Barcelona's L11 metro line.

'Before drug traffic was more prevalent'

The royal Spanish academy (Real Academia Española) defines a ghetto as a 'neighbourhood or suburb inhabited by people who are marginalised by the rest of society.' Many residents believe that the neighbourhood has been forgotten. The lack of public investment generates discontent, as does the desire to keep the zone isolated from the rest of the municipality. Victoria Lindao manages a salon and complains about the lack of interest in improving the neighbourhood. 'We have been forgotten. The escalators break every three or four days and it takes weeks before anyone comes to repair them.' In the poorest parts of cities social tensions are greater and people experience more frequent situations where they don't feel safe. Carmen López, an assistant in a bakery, confirms that there is petty crime and unrest between different groups in the neighbourhood. 'Before drug traffic was more prevalent. I'm sure the business hasn't gone away, but it's not as noticeable as in past years.' Carmen points out that people are more vigilant, but she adds that crime levels have increased in recent years, perhaps because of the crisis.

North south: periphery of the periphery

The motorway that goes into the city of Barcelona cuts through Ciutat Meridiana. On the upper side of the divide are the neighbourhood's tower blocks. On the lower side there are various buildings and huts. If you turn down to the side there is a radical change in surroundings: a dirt track takes you into Vallbona. On both sides of the street scrubland and overgrown bushes conceal hens and chickens. Vallbona's centre consists of two brick buildings, various boarded up businesses and two bars which monopolise the place. But if you continue a little further you discover a row of huts situated beneath the motorway. Cardboard, cement roofing and aluminium walls create surroundings that are all too real: the other face of my city.

Wind, rain and flooding have on various occasions destroyed the homes of a hundred people. Without heating, hot water or light the people stand guard at the entrance to Barcelona, welcoming all those who will never set eyes on them. It's because in the city of Gaudi, the shop window of Barcelona, there is no place for those who live on the margins of society. For those who someone dared to define as satellite citizens.