Art is politics: the first part of our series on portraits of artists who attempt to resist the 'cultural Chernobyl' which reigns in Belarus, a country asphyxiated by the authoritarian regime of president Alexander Lukashenko 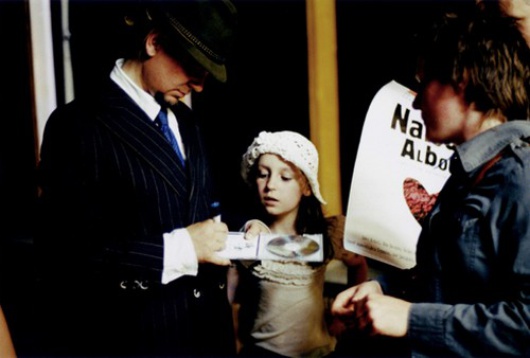 Inspired by the likes of Jimmy Hendrix, Nirvana and The Doors, the Belarusian hard rock group NRM (AKA Independent Dream Republic) released their first album in 1994, the same year as President Alexander Lukashenko arrived to power. You could almost say that the two have led their respective careers in parallel, with one feeding the dissenting style of the other.

Distinguished by the dissident bards of the preceding generation such as Vladimir Vysotsky, NRM are living proof of the popularity of hard and other variants of rock, which took their first steps of development during the Perestroika. The group released seven albums in ten years, which immediately had an enormous influence on the local youth, even if this process is weakening today because of more and more frequently imposed playing restrictions, of which the group has become a victim.

Despite their notoriety, NRM still rehearse in the same old basement on an old council estate. Liavon Volsky, guitarist and songwriter of the group and the son of Arthur Volsky, a very well known Belarusian poet and opposition figure, as leader of the group is its voice. In the wake of father’s experiences, from an early age Liavon was very conscious of the problems of political oppression. All the lyrics, the ideas and the commitments of the group come from him.

Today, despite of all the obstacles, Liavon still manages to play, Even though in 2004 his name was one of those inscribed on the black list of forbidden artists, he is even one of the only independent artists that still lives for their work.

“Two out of three concerts are forbidden”, he says. “After three or four years they are still cancelling them for obscure technical reasons; today a simple phone call from an official to the organisers or the stage owners with some threats of closure or with other intimidations is sufficient to cancel concerts, even on the day.”

In 1996, just as in 2006, Volsky’s name features in the official signatures aiding the election of the leader of the opposition party. Throughout the last campaign, he was the spearhead of the Belarusian artistic opposition that were publicly in support of the candidate Alaksandar Milinkievi.

Origin of our 'eye on Minsk' column

For 12 years, president Alexander Lukashenko has presided over the destiny of Belarus, this small state in the confines of Europe, squashed between the Ukraine and Poland beside Russia. Between demagogue authoritarianism and the repeated violations of Human rights, he has succeeded in maintaining a world in which the diplomats no longer hesitate in calling the 'last European dictatorship.'

As the level of artistic creation is in freefall and some are comparing the situation of the artistic world and local culture to a 'Chernobyl part II', the efforts of the resistance are coming together.

29-year-old freelance photographer Jef Bonifacino left to go and meet with these artists in the shadows: whether a rock singer, novelist or violinist and has painted their portrait. 'I wanted to reunite and allow each of them a voice in this exhibition, and at least on my level offer them a space to express themselves. These are also the testimonies of artists and journalists who continue to work passionately, in spite of the pressures, threats and other restrictions imposed upon them by their government.'