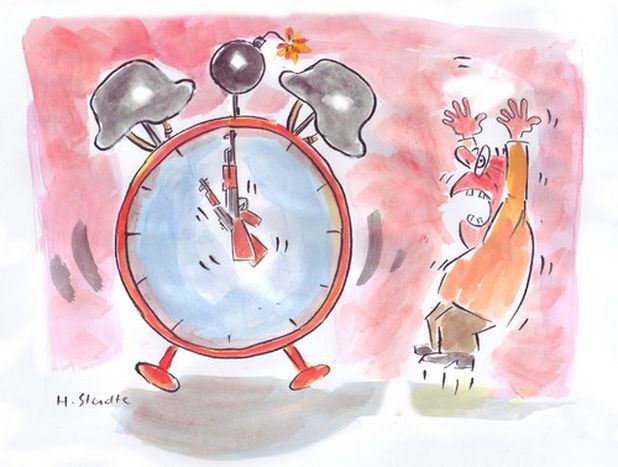 Being left on the Kosovan shelf

120 days left for the Troika - made up of three diplomats from Russia, North America and the EU - to reach an agreement over Kosovo. If no agreement is reached, it might be too late for a peaceful solution. One option is the partition of this Balkan province, controlled by the UN. Or worse, a declaration of independence for separatist Kosovans, recognised unilaterally by the USA, which could lead to civil war and possibly to friction between Russia and the West that would require more than just a diplomatic solution.

To use a Spanish expression spoken with a certain amount of malice when a woman delays having children, se les va a pasar el arroz - no good for any Spaniard if the rice in the traditional paella dish is overcooked! As 1 January approaches, maybe those who lived through the civil war in the Balkans will suffer from Torshlusspanik or panic that the door will close, as the Germans chime.

This can also be adapted to those situations where somebody fails to achieve their aims or carry out certain social obligations, for example getting married. The Spanish revert to their Catholic tradition and exclaim – with more relish than they ought to – that the person in question se va a quedar para vestir santos, meaning that they will be left behind to dress the saints. The British, born to trade and to do business, fear being left on the shelf - like old books that nobody wants to buy. Back to Kosovo and independence, the rather unimaginative Italian expression is probably no use:

non vorrai rimanere zitella?, or it wouldn’t want to end up single, would it?

Translated from Pánico a la soltería y a la guerra