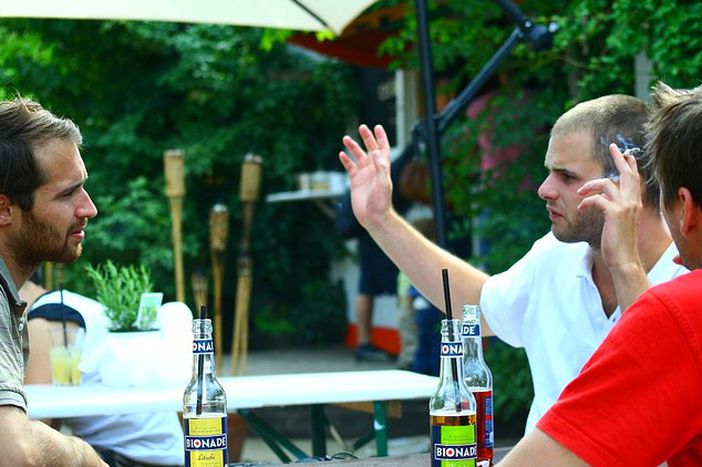 Being green: German lifestyles are less sustainable than they'd think

In Germany sustainability is in. Germans are buying organic yoghurt, separating their rubbish meticulously and not leaving the tap on when they brush their teeth. But, to be honest, they are actually being inconsistent, for they do also sometimes use a low-cost airline to jet across Europe, they cannot resist new trainers and they eat tomatoes in winter.

So why are they more eco-friendly in their minds than in reality?

The consumer behaviour survey Greendex indicates that Europeans are living less sustainable lifestyles than they thought they were. The Germans specifically consider themselves to be environmentally friendly, but they only came twelfth out of the seventeen countries studied. The survey questions concerned, for example, their energy consumption, their preferred means of transport and the origin of their groceries. The Indians, Brazilians and Chinese hold the top positions for sustainability. It is becoming clear from this that people in emerging markets live more environmentally-friendly lifestyles although they do not drive cars with catalytic converters or buy organic produce. So it is standards of living that determine how much people pollute their environment as a result of their consumption.

This is also the case within Germany. ‘Sustainable consumption is being practised, above all, by the poorest people,’ explains Ulf Schrader, an expert on sustainability from Berlin’s university of technology. This stands to reason, for they do not have the money for air travel, a large car or the latest gadgets. So what is sustainability linked to if not wealth?

Every product has its price

It is time the concept of sustainable consumption was scrutinised. Living a sustainable lifestyle means not consuming more than the earth produces. A sustainable product must not only be economical, but must also be fairly traded and environmentally friendly. With every frozen pizza and every computer, Germans are buying a product which cost a specific amount to produce in terms of energy and raw materials. Prices, which are often cheap, do not reflect this. How can a t-shirt at a price of five euros cover the costs of the material, manufacturing and transport? To say nothing of the indirect costs as a result of pesticides, CO2 pollution and the poverty of the seamstresses?

People therefore close their eyes to the discrepancy between the costs and the price. Melanie Jaeger-Erben, who works for the centre for technology and society at Berlin’s university of technology, has got a very simple explanation for this: ‘For a lot of people sustainable consumption is not suitable for everyday life.’ This is because anyone who really wants to make a conscious decision has to put a great deal of effort into gathering all the information. Jaeger-Erben, who is a psychologist, discovered that it is easier to make sustainable decisions when they are more practical anyway in terms of everyday life. ‘Taking the bus or cycling is quicker, the weekly market selling local produce is just round the corner and taking the sleeper train to Paris leaves people in better shape for exploring the city the next day.’

The findings of Germany’s central environmental authorities also support the fact that there is often a gap between ideals and reality. In 2010 the German federal environmental agency (Umweltbundesamt) studied the ecological awareness of Germans in a survey, in the course of which the environment proved to be one of the three most important political topics. The demands on the economy and on politicians are high: 85% of those questioned would like to see an expansion in renewable energies. Despite this, only 8% of local households are using green electricity. Two thirds of Germans regard their consumer behaviour as being important, and yet half of all Germans do not want to spend more on sustainable products. Younger people in particular, are actively involved in conservation. 12% of those aged under 29 stated that they are committed to working on behalf of the environment. This is because it has become easier to make a commitment to the natural environment via the internet, and the respect shown by society for doing so has greatly increased.

Nonetheless, our western world continues to be characterised by consumption. No Germans should be reproached for having a new pair of jeans, a visit to the spa centre or a weekend in London, for each of these activities consumes resources, the effects of which are not reflected in concrete terms in everyday life. Climate change, CO2 emissions or child labour are consequences which are not directly visible for consumers.

Why are no changes being made?

Good intentions are therefore not enough to alter people’s behaviour. People are shaken up by major events including, for instance, the scandal over dioxin-contaminated animal feed, as could be seen recently in Germany at the end of 2010 and the beginning of 2011. Suddenly everyone wants to know exactly how pork 'schnitzel' and how their morning egg are produced, but public interest also dies down again just as quickly as it was awakened, and people slip back into their old habits.

Profound changes to people’s standards of living are needed in order to lead them to change their thinking over such a complex topic as sustainability. These include an illness, moving house to a new town or the birth of a child. In her thesis Jaeger-Erben investigated the way in which events of this kind have an effect on purchasing decisions. ‘All the parents questioned who were rather stretched financially after the birth of their child bought organic produce. At that moment it was simply important to them and none of them complained about the high prices.’

Each person must decide for himself whether a sustainable lifestyle is therefore synonymous with sacrifice. This is because anyone who associates shopping with enjoyment of life will hardly be prepared to show restraint, making himself or herself unhappy in the process. The manufacturers of sustainable products are therefore trying to win over informed consumers. They promise a better attitude to life, self-awareness, health and sometimes also financial savings.

This is exactly where the power of customers comes into play. ‘Paradoxically consumers frequently underestimate their own scope for action. They do of course have a certain influence on market forces by means of their purchasing decisions,’ as Jaeger-Erben affirms. For example, in 2007 German customers prevented the discount supermarket Lidl from buying shares in the organic supermarket chain Basic by boycotting the latter.

But Jaeger-Erben, who is a sustainability researcher, also indicates the limitations of consumer power. In order for sustainable trade to become simpler, more practical and therefore suitable for a mass market, Germans’ social structures have to change. ‘With regard to the way in which we’re living, economising and consuming nowadays, it will not achieve much if a few thousand people, roughly speaking, buy organic milk.’