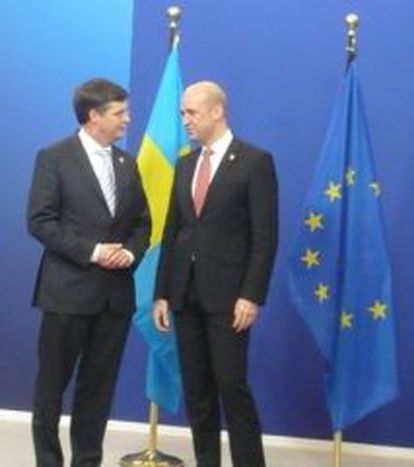 By Zita de Pooter At the end of the Summit, each Member State holds its own press conference to reply to national press questions. cafebabel did not miss the Dutch press conference, to hear what one of the most serious challenger of the newly elected President had to say!

As to be expected, Dutch Prime Minister Jan Peter Balkenende announced his full support to Van Rompuy as the new European President. He also wished him all the best, looking forward to a good cooperation with him. Balkenende and Van Rompuy know each other for more than twenty years: for the Dutch Prime Minister, he is the right person for the function. He even emphasized that Van Rompuy has the ability of bringing unity, referring to his experience with the complex issues in Belgium.

All in all, he declared he was relieved that the decision was finally made, and that he was happy that the Council could reach consensus so quickly. It was not even necessary to vote! Van Rompuy was chosen unanimously.

Tony Blair and Jean-Claude Juncker or Vaira Vīķe-Freiberga were named in the EU Presidency race as open contenders. But there were also many speculations about Balkenende for the job, although he still was denying it.

To the question "Would you have been a better president?" Balkenende responds: I was never asked for the job.

But when he was asked if he was disappointed, the answer was quite annoyed: "I was not a candidate, not even asked, and busy with many other issues. You can only be disappointed when you want something."

One journalist at the press conference still argued: "By not saying you will not be a candidate for the European presidency, you actually say you are open for the possibility".

Balkenende had a clever respond: "It would be arrogant to say you will not do it when you weren't even asked".

So, maybe he was already disappointed because he was not asked?

I still wonder if Balkenende had prepared a three pages victory speech just like Van Rompuy? But I guess this we will never know…