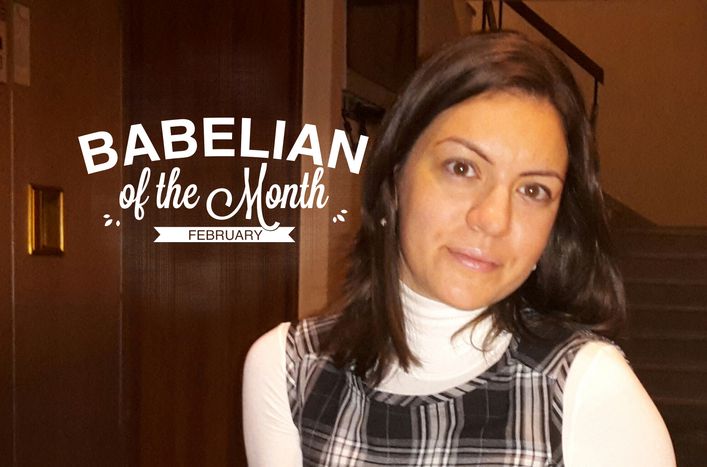 Already one of the cafébabel community's finest translators, Maria-Christina Doulami delved into writing her own fantastic pieces in February. This talented hyperpolyglot covered the rise of leftist parties in Europe as well as attitudes to immigration in the UK.

cafébabel: Tell us a little bit about yourself.

Maria-Christina: I love to write, read and travel. I write more than I can talk, and if you ever want me to analyse something, allow me to write it down. I work in communication and media monitoring, while I also freelance as a journalist, writer, editor, and translator. I love learning languages (I am currently at 5, going on 6) and enjoy discovering new places.

cafébabel: If you could have dual citizenship, which country would you choose?

Maria-Christina: Hmmm, I think I would say Spain. Mainly because I imagine it to be very close to Greece in culture and mentality, and because my name, for many, is reminiscent of Spanish origins…

cafébabel: Which country would you like to live in?

Maria-Christina: That is a very good question. Somewhere in central Europe so that going away for a city break would mean just hopping over the border. Maybe Austria.

cafébabel: What is your favourite saying at the moment?

Maria-Christina: There are many, but to single out one: “I’d rather attempt to do something great and fail, than to attempt nothing and succeed.” - Robert H. Schuller

cafébabel: Can you tell us three countries that are better to live in than yours and why?

Maria-Christina: Denmark, because it is the home of the Little Mermaid, and she must have known something, leaving the sea to live onshore there. Switzerland, because its name alone emits elegance and prosperity. The snowy Alps are also a plus. Germany, because let’s face it, they don’t seem to have the financial woes the rest of Europe is faced with.

cafébabel: What is the latest cultural item to be found on your bedside table?

Maria-Christina: Can a book be described as a cultural item? My bedside table usually hosts the latest book I am reading (it changes every 5-6 days).

cafébabel: Where can we find you on a Friday night?

Maria-Christina: Somewhere cozy with snacks and drinks watching a movie with great company.

cafébabel: What advice would you give to someone who is nostalgic?

Maria-Christina: It is OK to remember the past with fondness, but the present is what we need to live for and act upon in order to create a better future.

cafébabel: If you could interview one person (dead or alive), who would it be?

Maria-Christina: Eleanor Roosevelt, because she was the strong woman behind the US President. She was one of the most admirable and influential (female) politicians and activists of the 20th century. Her “damned if you do and damned if you don’t” quote is one of my favourites.

cafébabel: Would you prefer to know a lot about one subject or a little bit about many subjects?

Maria-Christina: Can’t it be both? If not, I would say having a broad knowledge of a range of things greatly opens your mind to the world.

cafébabel: You have just won an Oscar. Who do you thank in your acceptance speech?

All those who have supported me so far, and who, even if no longer with me, have contributed in making me wiser and stronger.