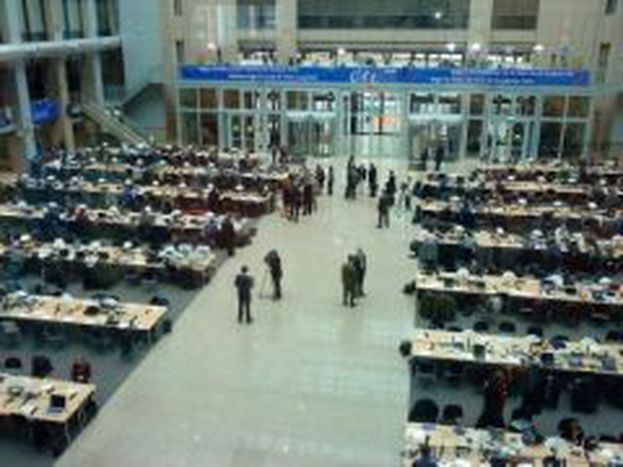 Journalists are not usually the people to stand in the spotlight. But did you ever wonder what they really think about the subject they are covering? During the European Council Meeting, we talked with 7 journalists from 7 different countries. Spain, Cyprus, Denmark, Russia, Finland, The Netherlands and The UK. We asked them all the same five questions about the EU.

The European Council meeting ended last Friday at about 3 pm ... however the problems of EU citizens did not end, and will not end in the near future. Withdrawal of the right to vote, creation of a financial mechanism, changing the Treaty of Lisbon, the Greek nightmare, the crisis -a financial as well as moral one, some say. Europe is going down a foggy path in the forest of uncertainty ... and it's midnight! The good news is that she is not alone in this forest –many international players have more or less the same problems. The bad news is that this crisis will not pass with the usual drug prescription. Everyone sees that something has to change drastically, but no one knows what that something is. Pessimists say we will never find out what that is because the European system will collapse. Optimists say that we will eventually find our way out of the mess.

But what do the journalists and reporters of various media personally think about the burning European Union issues they covered during the days of the last meeting of the Consilium? The four subjects discussed were: The European crisis, the views of Angela Merkel -informal head of the “European State”, the response to the financial crisis and the future of Greece, and the immigration problem.

Crisis, Europe and its future Not a single pessimist! Dutch and Russian journalists are clearly optimists about the EU. Generally, all journalists believe that Europe will overcome the crisis, although reporters from the UK and Cyprus both speak about serious setbacks (austerity measures) that will make Europe stuck for many years. A newspaper reporter from Denmark goes many optimistic steps further stating that she doesn’t think that there is anything about the current situation suggesting that Europe will not survive. The Spanish reporter believes in the unity of Europe, because otherwise ... “there will be thousands of people without work”, meaning that the European public service employees will face unemployment. The Finnish journalist we spoke to is not pessimist about Europe but supports firmly the idea of deconstructing the Euro area and splitting up the common currency. Even more stronger is the agreement of all 8 of them that Europe has no united front towards other international players.

Angela VS all the rest Is Angela Merkel, politically speaking, the best thing to happen in Europe at present? The German Chancellor with her rigid political figure, renowned German organisation as well as her constantly friendly smile has created a lot of friends and enemies all around Europe. Journalists who gave their opinion for the purpose of this article are split in two. Russian, Finnish and Dutch journalist gave respectively 10, 8, and 6 out of 10 to Merkel’s views and the need for the rest of Europe to follow them. However, all three of them consider that the penalty of the withdrawal of vote is unnecessary and that changing of the Treaty of Lisbon in some cases would prove impossible -at least for the time being. They also believe that finally a new financial mechanism will be established. On the other hand, this lady has some serious “enemies” ... journalists from Spain, the UK, Denmark and Cyprus all rate Merkel with 2 out of 10! Although the Spaniard says that France and Germany always win in the end, there is a firm positioning among the 4 four of them that revoking the right to vote will never be supported by the majority of the countries, because it is simply impossible to support something that later can be turn as boomerang against them, even in international affairs. “What will be the role of the small countries then?”, asks the Cypriot journalist. The Dane adds that legal experts judge it to be the wrong way to mix financial mismanagement cases with punishment at a political level. Finally, the British journalist believes that a major treaty change would prove dangerous for Europe, as the majority of countries don’t want EU to have greater powers on their national entities. Finally, all journalists consider that Sarkozy is running behind the views of Merkel in many subjects.

Greek government response to the crisis Now what do our journalists think about the Greek debt crisis and the intention of the Greek government to maybe go for early elections to legitimize the actions for the measures needed in the next step of the EU-IMF rescue plan? The Russian outsider thinks the Greek government did wrong to follow the IMF plan and thinks that early elections aren't any kind of risk. He more or less supports the British journalist in thinking that voters may punish the government, but any new one will also follow the rescue plan as there is no other way out right at this moment. The Finnish reporter finds it democratic to go for early elections, but points that another government will have to choose between the IMF plan and default. The Cypriot journalist foresees no early elections for Greece and the Dutch considers it a huge risk and not a responsible way of dealing with the problem right now. The Spanish correspondent feels this will be the most democratic solution for Greece to have a more stable ground to implement the next phases of the rescue plan. The Danish reporter thinks that if the Greek Prime Minister feels that he needs further validation from his citizens, then “he should go on with the early elections, to let Greece decide if they have more faith in the opposition that drove the country into this crisis in the first place”.

Immigration problem Denmark has a quite big problem with immigration, but the Danish journalist prefers to leave the decision for immigration policy completely to the politicians. The Russian journalist is completely positive about Merkel’s and Sarkozy’s views about stricter immigration policies. The Cypriot and Finnish reporters agree on this one too. The journalist from the UK, the Netherlands and Spain support the view that stricter policies on immigration are not needed for Europe, with the British saying that more sense is needed and that many western countries are built on immigration. The Spaniards goes further to say that all citizens need more rights, even if they are immigrants, because “we all built what we today call Europe”.