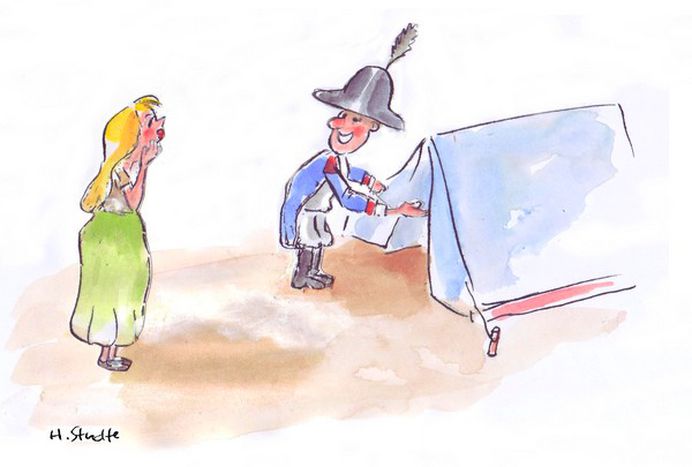 'For heaven’s sake, I have to edit an article within ten minutes!' Jurrio, jurrio

squeals a young Spaniard from Malaga. His forefathers must have caught the knack for the expression hurry up! from the legions of English tourists swarming the Costa del Sol where he comes from. Port towns in Europe have always been this strange breed of language factories, where businessmen tried to harmonise a linguistic understanding with the people milling around them.

In the nineteenth century, the coastal city of Cádiz in southern Spain brought together around 138 different nationalities. One of the most important longshoremen was a grumpy Irishman who would often tell his inattentive workmates Look and do it! The residents of Cádiz adapted the Irish accents, until the phrase evolved into being estar al likindoy

; you are paying attention to what you are doing.

It was poor but clever people who could use language barriers to their advantage and comprehension for everybody. Shoe shiners in Italy would hang around the bars frequented by sailors. In that other mythical port of Naples, they were known for their famous Sciuscià

, a word derived from the English shoe shine. The expression later became the title of a neorealist film by Vittorio de Sica in 1946.

The phrase also carried over to the German as Schuh Schein. In a final tale, pensioners in some regions are oft heard warning their grandchildren with raised fingers Mädchen, mach mir keine Fisimatenten

(Young lady, do not visit my tent, i.e. don't get yourself into trouble). The saying comes from French soldiers from Neapolitan times, who would entice young ladies into their tents.

Translated from ¡Look and do it: likindoy!