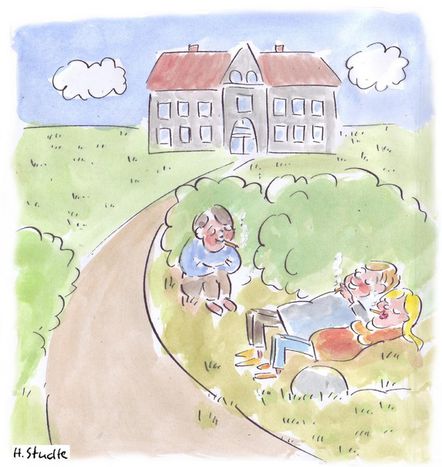 The French and Italians ‘blow up' or ‘make a hole’ in their school timetables, whilst the Spaniards 'disappear' with the 'young bulls' - pan-European idiomatic expression of the week

The back-to-school period is always an opportunity to make good resolutions, like to attend lessons regularly. However, the last of the good weather can make the temptation to cut class almost irresistible. Each nation does it differently: the English, with their legendary tact, simply skip school

as if they were skipping rope. That, of course, involves making yourself a hole in your timetable, like the Italians (fare buco

), who even expand this and talk about sawing a hole (fare sega

), in their timetable. The French blow up their classes (péter les cours

), without the need for dynamite.

The freed up time is easy to fill. The French, given their enthusiasm for walks in the country, are happy to go to school among the hedges (faire l'école buissionière

). The English prefer to be vagabond-like and play truant

, rather like the Hungarians, who hang around (ellógom az órákat), usually in the streets. For the Spanish, to skip class is to make young bulls (hacer novillos). There are a few explanations for this, involving Jewish people praying to a golden young bull during the Spanish middle age, and young pupils running away from school in the countryside to learn how to be a torero with young bulls. The biography of the famous Spanish poet Rafael Alberti recounts how he was expelled from school as a child because he skipped classes to go to learn how to be a torero in a toro farm! Another Spanish expression to describe cutting class is to become like smoke (esfumarse), i.e. to disappear.

The Germans understand that cunning is required to acquire these moments of liberty, and their expression die Schule schwänzen

recalls the habit that bandits have who cheat and swindle everyone who gets in their way. One last piece of advice from the French: don't dry out your classes too much (sécher les cours

), as oysters are dried out in the sun - unless you also want to dry up in front of your exam papers too.