Okay, that may be the case, but who are "they"? This is an important question to answer accurately before we can ask further questions, pivotal for the future of our civilisation. Thoughts during the course of recent events in Paris.

A little more than 72 hours have now passed. 72 hours of feeling a rollercoaster of different emotions: fear, dismay, incredulity, anger and terror... because after all terrorism's ultimate purpose is to terrify. There's no doubt about it, they are succeeding very well at achieving this goal.

Okay, that may be the case, but who are "they"? That is the fatal question.

"Fundamentalists", "Islamists", "ISIS", "Muslims": the answers you get to this question can be various, sometimes not completely correct, other times completely wrong. But that is not the biggest problem. There is always time to learn and redevelop these attitudes, if there is a desire for information and truth.

The main and most worrying problem comes when all these elements are put together. Confusedly mixed in a fetid pot from which nothing emerges but hate, ignorance and carelessness. You only have to talk about it on the street to realize that.

We are surely talking about an inhuman and senseless event, that has deeply shaken the heart and soul of an entire continent, and will surely remain in the memories of a generation of French, and European, citizens. The point is that when talking about this in an atmosphere of disbelief and fright, the discourse inevitably arrives at the point of people saying something along the lines of: “They did it!” “Who?” “The arabs! ISIS! The Muslims!”

There we go. Three elements that have nothing in common, but have sneakily made their way to the public imagination as a single evil moloch, a demoniac being who wants to threaten European culture, identity and security. It is a worrying picture, one where every single devout Muslim in Europe is automatically identified as a terrorist, a violent assassin for a killer God.

The truth is, as always, different. The truth is that "they" are threatening our way of life. They being, the terrorists, and the few people behind them, who directed the slaughter and organized the carnage. Yes, the small few. Because we are talking about only a few people, in comparison to the huge number of devout Muslims in Europe. 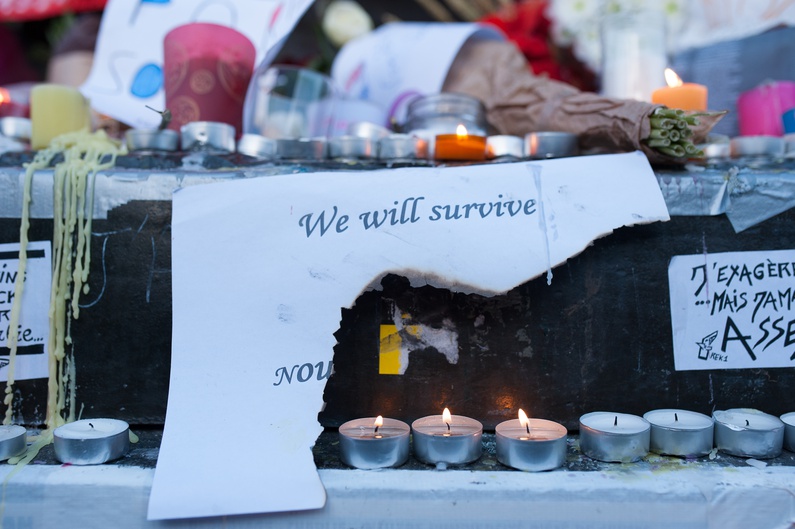 The truth is that "they" are assaulting our peace, the still imperfect cohabitation that we have built throughout the years and still we continue to build every day, with patience and determination. This is all because some people believe that this peace is simply unconceivable. It is not permissible that Christians, Jews, Muslims and Atheists can peacefully coexist in mutually supportive communities. It seems “the few” want to overwhelm “the many”, using the oldest educational method: violence. Unum castigabis, centum emendabis. The translation from Latin, punish one to educate one hundred people. Something that not only can generate pure terror in common citizens (communal targets have been deliberately selected, to send the message “we can hit you, whoever you are”), but can also stop the progress of integration in the process. "They" sew doubt, turning a series of criminal acts into a clash of civilizations, between the “western world” and the "Islamic" one.

So what is the most appropriate response to this barbarity? Definitely not the decision to close off, divide and remark upon difference.

It is impossible to comment on the reactions of those, like the Italian daily newspaper Libero, who opened on Saturday with the title “Bastard Muslims”. Or some Northern League politicians, who in the first minutes after the carnage published messages like “I will kick the ass of the next left wing/5 star idiot who talks to me about a moderate Islam.” Or Matteo Salvini's message on Facebook: “Sweep checks on all Islamic properties in Italy, stop departures and landings, attack Libya and Syria.” Also, it has to be said that these are ideas that can take hole of people's minds, at a moment when it is difficult for the brain to overcome gut reaction.

The only one possible solution is integration. Be open minded, so that no one will be isolated and marginalized. Collaborate with all devout Muslims to eradicate this poison. It is useless to close borders and build legal and cultural walls against Muslim foreigners. This is because the enemy is in our home, as the facts of Paris have clearly shown.

War and violence will do nothing else if not make the crimes of a few people into a “clash of civilizations”, exacerbating negative feeling, multiplying the number of assassins, radicalizing ideas and transforming pacifists in fighters.

We must find an equilibrium, to fight "them". And “they” are solely the terrorist criminals. Because all other Muslims are included in the word “we”.