At the heart of ‘The Orange Revolution’ – Part 3: Facing up to reality

In the last of a series of three reports into the Ukrainian revolution, Sébastien Daycard-Heid asks whether Yushchenko will be able to keep his promises made to Ukrainian youth 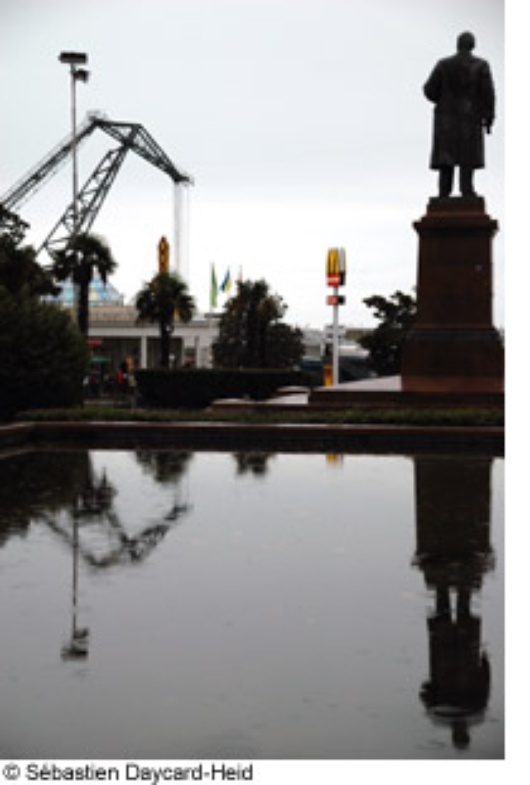 On this election morning in Kiev there is a foreign flag flying at the heart of the tented city housing the ‘Orange Revolution’ protestors. It is the Georgian flag, a red St George’s cross on a white background. The Georgians are camped just a few metres from a tent dedicated to the memory of Georgian journalist Géorgiy Gongadze. He is a famous figure here in Ukraine, and one whose assassination in 2000 remains shrouded in mystery. The release of an audio cassette implicating the Ukrainian president Kuchma in his death sent shock waves right up to highest echelons, to both the president and his Prime Minister Yanukovich.

A show of solidarity

The Georgians are here to stay, attracted by Kiev’s prestigious universities. Eléné is half Ukrainian, half Georgian and is studying at Kiev’s National University. Just like her Ukrainian fellow protestors she dropped everything to be here at the insurrection. The orange rose she holds symbolises both the revolutions she has witnessed in her lifetime, as she explains: “We have come here to defend Ukraine. Some of us were also in Georgia during the “Rose Revolution” [which overthrew President Shevardnadze in 2003]. Others actually live and work here in Ukraine”. Georgui, Levan, Timour and Eléné are all Georgians who collected money at home in order to come here and support the Ukrainian protestors. The anti-establishment ranks are swelled with every insurrection here in post-Soviet Eastern Europe. One Georgian tells me: “We are here to protest against the government’s crimes and to support the Ukrainian people. Georgia provided an example to follow and if another revolution springs up – in Belarus for example – we will be there”. No one doubts the Ukrainians’ willingness to go to the aid of their Belarusian neighbours and cousins. The Georgians also dismiss the lack of progress made by their president Saakashvili in cementing his promises. Georgi points out: “Saakashvili has given us our freedom even if growth has not been very fast”.

The wall comes down again

Despite persistent rumours of third party (perhaps American) instigation of this insurrection, the population’s fundamental dissatisfaction with the former oppressive post-communist system remains the powerful bond which unifies this movement. Unlike Western and Central European nations in 1989, Ukraine had to initially fight for her independence from the USSR. This was achieved by a certain class of Ukrainian cadres who emerged from the Soviet machine and whose ‘liberalisation’ of their country in reality freed up profit-making but not politics. Although Ukrainians could get rich the hazy rules, the apparatchiks and the authoritarian regime lingered on…

The camps in Independence Square (Maidan) are surrounded by big polystyrene blocks, as if a second Berlin wall, this time separating the European Union from the former Soviet republics, had been pulled down, its graffitied remnants, covered with the word “peace”, evidence of its destruction. It seems that here, in Europe, a second wave of anti-Soviet feeling and associated democratisation is taking hold. This is driven both by patriotism and by a desire to put some daylight between Ukraine and its former guardian Russia, seen by most Ukrainians to still be too ‘colonial’.

Maksim Pevshen, a Ukrainian count and television producer, provided the Ukrainian 'revolutionaries' with much needed material assistance. He categorically states that the 'Orange Revolution' could never have succeeded without the support of the middle classes and Ukrainian businessmen; “All business people helped, particularly because for the two years when Medveshuk was the director of Kuchma’s administration and his brother in charge of taxation, times were very hard. There were no rules or any legal backing for us. The powers that be were a bunch of bandits. They just seized businesses for themselves, simply liquidated others - corruption mushroomed”. Supporting Yushchenko is a simple choice for him and the other business men who make up Stab, the logistics group running Kiev’s revolutionary encampments. “If Yanukovich and the clique supporting him, especially Akhmetov [an oligarch who controls Eastern Ukraine’s coal industry] had won we would have had to kiss goodbye to our businesses…and leave the country”.

In actual fact the chief financial backers of both Yushchenko, Tak [a pro-Yushchenko political faction], and the student organisation Pora which organised the revolution, are small businesses and start-ups. Yuschenko’s concern to respond to their desire for economic opening-up, clear rules and transparency is apparent from key elements of his programme. The head of the future president’s campaign Oleksandr Zinshenko has announced; “We want changes to favour the development of small and medium-size businesses in order to increase tax revenue”.

On Independence Square the announcement of the third round election results was greeted with an explosion of joy. Common passions united the young and the not so young, students and business men, the rich and the poor as they awaited the speech of their newly-elected president, watching in the meantime the analyses of the initial results on the pro-Yushchenko Channel Five.

The next day though joy was followed by panic. Throughout the country, people were drawing out their savings en masse, frightened that the banks would collapse after the change of government. In reality Yushchenko’s victory has boosted the value of the Ukrainian stock exchange. Those who financed the revolution look forward to a healthy business climate in future despite the decline of the economy during the weeks of revolution. The new government might whet the appetite of potential investors by looking again at recent privatisations and other projects such as the Odessa-Brody pipeline. Another challenge for Yushchenko is to increase the pensions of the babushka – the little old ladies currently living off virtually nothing but what they can scrape together from selling Tak scarves and dolls decked out in orange.

Thus Yushchenko faces considerable challenges that he cannot overcome without European support - hence his massive charm offensive in this direction. It also remains to be seen whether it will only be those very close to the new president who will benefit from the ‘new deal’. This would frustrate the hopes of the majority of protestors who seek a complete overhaul of Ukraine. In early December, during talks with Kuchma to negotiate the third round of elections and avoid military intervention, Yushchenko committed himself to constitutional reforms transferring powers from the president to the parliament by around September 2005. If the law concerned is ratified, this will only leave him a few months to act. Moreover, from then on, power will be in the hands of a Ukrainian parliament made up of many influential groups but particularly the Ukraine’s oligarchs’ political parties. Might this dramatic 'Orange Revolution' be remembered one day as merely a flash in the pan?