Arriving in Athens: Out of the frying pan and into the fire

The collapse of the Greek economy has left a visible impact on the country’s capital. In spite of bailout packages, the situation hasn’t improved. Severe cutbacks seem only to deepen these cracks. The proportion of struggling Greeks is significant; almost every second young person is out of work. Increasing numbers face the prospect of life on the street. Is hope on the horizon? Seemingly not.

As if the economic fate of the Greek people wasn’t enough, the city now faces a further challenge – the arrival of thousands of desperate refugees escaping war and poverty, now stranded in Greece following border closures along their route through the Balkans. Athens is a current hotspot for these issues across the continent, where European and global problems converge. We journey through a troubled city.

"Our old values have been lost"

"Shedia! The new issue of Shedia!" I hear the voice of Maria from a long way off, as she stands at the entrance of the Metaxourgio metro station – barely two kilometres from the Acropolis. Dressed in a bright red vest and cap, the young vendor hopes to sell copies of Shedia – Greece’s only newspaper on the topic on homelessness – to the passing crowd. However, as is the case for others selling lottery tickets, SIM cards, or bus trips to Albania, hardly anyone stops to buy a copy. In times of crisis, it’s difficult to sell anything.

Two years ago, the 30-year-old Greek native would never have foreseen that she would end up in this position. Her future looked promising. She studied graphic design – graduating with honours – attaining her degree in the middle of the financial crisis. "No matter how hard I tried, employers just told me they were having to make more and more people redundant. No one wanted to hire me. It’s frustrating to not be able to afford basic necessities, but the worst thing is that your brain shuts down when you don’t have a job."

Alongside her mother and brother, she lives with her aunt in Nikaia, in the poorer dockland area of the city. Only her mother is working – her salary is barely enough to provide for the family. Debt is mounting up; a life on the breadline. 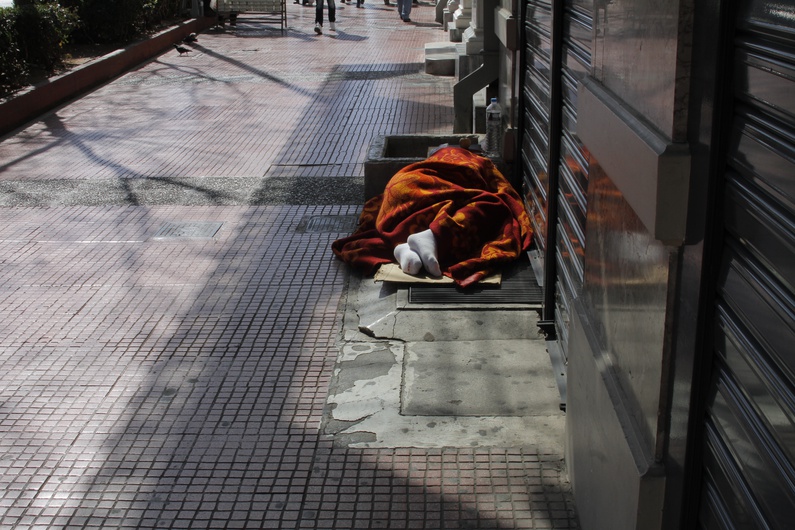 Yet stories like Maria’s are no longer the exception. According to Eurostat, 36% of Greeks currently live below the poverty line. Selling copies of the street paper brings a modest income to those most in need. At least now Maria has the means to make a little money.  For two years, she has stood at one of the many newspaper kiosks in the city from 8am to 4pm. She keeps half of her revenue.

At first she was ashamed of her job; on seeing a former classmate, they both acted as though they didn't know each other. Today, Maria has found a way to allay her anguish. "The crisis has robbed people of their dreams," she explains, "I am 30 years old; I’m supposed to have started a family by now. I should have my own house. But our old values have been lost. These are things I no longer dare to think about. I look forward to being able to save some money so that I can support my mother."

In any case, she has until the end of the day to sell 12 more papers. So far she's made 18 euros – by no means bad earnings. When one of the ticket vendors comes over to give her a banana at the end of their shift, she's clearly delighted. "That is the one good thing," she continues, "If one thing is more common during this crisis, it’s solidarity."

The reality of the crisis hits you hard

I experience this solidarity first hand, as I sit in a car with workers from the NGO "EMFASIS". I am accompanying them on one of their night tours. Armed with food, sleeping bags and other essentials, they are looking for volunteers to help the city's most needy people.

They’re on the go, night and day. "This is our principle," explains Efremia, a young psychology student, who helps the city's homeless several times a week, "We bring assistance to those in need. We're there for them, to listen and help them recover their dignity."

The efforts of on-the-ground personnel are urgently required. As soon as night falls, the extent of the economic crisis becomes visible in Athens’ side streets. Doorways and ventilation shafts become makeshift sleeping spots. The UN Human Rights Council reports that over 20,000 people are homeless in Greece. Around 15,000 of these are in the greater Athens area alone.

It is not just vagrants or drug addicts who end up on the streets. The "New Homeless" are increasingly middle class Greek nationals, who, due to the economic crisis, lost their jobs before they lost their homes. Social welfare is non-existent; unemployment benefit is limited to a maximum of two years. Few Greeks are immune to the risks of homelessness. "I see so many young people on the streets, whose family networks have been severed," said Efremia as we drive toward Athens' Piraeus Harbour, "I even met my old neighbour."

Alongside the huge ferries that are harboured in the dock, homeless people have makeshift shelters on the pavements and benches. They are already waiting for the volunteers to arrive. This evening we are distributing hot food, tea, and books to comfort stranded intellectuals. "We can only offer short-term emergency aid," explains Tzoanna, the team leader, "The city needs a long-term solution, but that hasn’t happened. Out in the streets, you see the reality of the crisis and it hits you hard."

One sight pains the workers more than others: two young children from a family who were not awarded a place in their shelter. "There is too much that needs to be done," Tzoanna continues, "Our efforts are slowly being exhausted, and there is no end in sight. What’s more, there are also refugees who need help."

Soon after, the true extent of Greece's difficulties are revealed when a huge ferry pulls up to the dock, disturbing the silence of the harbour. Hundreds of refugees pour out of the hold and into the Athenian night. Men and women, young and old; some ill, some with children – the flow of people seems never to end. Seagulls squawk overhead. Confusion reigns. Women ask for water for their children, but all we have are a few little pastries and a dribble of milk. The rations are shared among the refugees in minutes. Empty-handed, we survey the grotesque scene.

In and amongst the city’s sleeping homeless – those who have lost everything – settle new arrivals that have had to leave everything behind. They are looking for a new life. Their future cannot be foreseen. The fact that the borders to Macedonia are closed is common knowledge. Detention centres are completely full. Tens of thousands of refugees are stranded in the country.

The government calculated that the numbers had reached roughly 100,000 in March. Those who don’t have the money to pay for accommodation are threatened with the same fate as their new Greek neighbours. A father from Afghanistan, arriving with his nine children, doesn’t yet know where they will spend the night. The only thing he is sure of is that their journey must continue. "We cannot stay here," he explains, "There ‘s no future for in Greece."

"This is not the way we had imagined Europe"

For many, Athens is an unintended pit stop. This becomes apparent the next day, in Victoria Place in the centre of the city. Hundreds of refugees are also stranded here, their possessions packed into small bags. They set up camp on the lawns and benches. There is a complete lack of amenities: no toilets and only a few water fountains. Aid volunteers hand out warm meals from a small van. There is not enough for everyone.

It’s here that I meet Sami, Namgo and Gewed: three young Afghans who arrived here on the 20th of March after more than two months of travelling. They hope to get to Germany, but their journey came abruptly to a halt when the border with Macedonia closed. There’s no way through for Afghans; only a few hundred Syrians and Iranians are allowed past each day. These young men were sent back to Athens. They've been sleeping outside for four days.

"This is not the way we had imagined Europe," Sami explains, "We spent all of our money on travelling. All we have is a sleeping bag and at night, we’re freezing. We’d be in a better position if we were in Afghanistan, but it’s extremely dangerous for us there." Fearing that no one would believe him, Sami shows us a photo of his two brothers, killed in a bomb attack. His expression is one of desperate hopefulness that the borders may yet open. They won’t tire of asking when this will occur. For now, however, they get no answers.

You can see that their strength has diminished over the past few days. A glance around the park is enough to confirm that Greece is on the verge of a humanitarian disaster. In parting, the boys have one last request. They don’t want their photos to be published. "If our mother saw us like this, she’d have a heart attack," they say, "We can’t tell people back home about what has happened to us in Europe."

Whilst staying in Athens, it became clear to me that many homeless Greeks and stranded refugees share the same feelings of despair. The city has proven itself to be the sad epicentre of a failed Europe. The worst thing about this is that there’s no end in sight. Greece is unable to handle the double burden of the financial and refugee crises.

Translated from Ankunft in Athen: Vom Regen in die Traufe