Are you a feminist or an egalitarian?

I am in an argument with a friend about two-bit rappers who degrade women and generally make me nostalgic for the good old days of music. He seems to find this funny. “Fortunately” I say, “there are still rappers like Akro who aren’t afraid to call themselves feminists”. Discuss.

He seems perplexed. I quickly realise that he doesn’t really understand the word “feminist”, which he associates with gangs of angry shrew-like females. However, the word “feminism” isn’t a synonym for “man hating”.

Like Emma Watson said in her speech on the 20th of September as she launched the HeForShe campaign: “feminism by definition is the belief that men and women should have equal rights and opportunities. It is the theory of political, economic and social equality of the sexes”.

I continue in this vein, explaining to him that this is an issue he should be taking seriously. In 2015, there are women who don’t have the right to drive, or to have an education, or who sit on the floor at meetings because they don’t have the right to a chair like the men. There are countries where rape is committed without fear of consequences. A Turkish President who declared that “women shouldn’t be considered as equal to men”. One woman in three is a victim of domestic violence. It’s scandalous, immoral, revolting, shocking, and so many other synonyms. 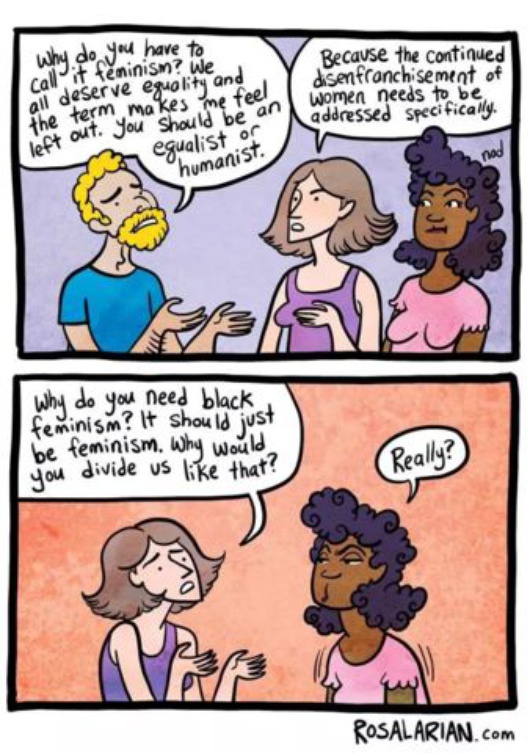 Thankfully, the past few years have seen a surge in popularity for the feminist movement (but not for the word “feminism” itself, unfortunately). More and more influential names are openly defending the cause. Christina Aguilera has done it (admittedly, coarsely) in her clip “Can’t Hold Us Down”. Beyoncé affirmed it by including an extract from a speech by Chimamanda Ngozi Adiche in her single “Flawless”. Patricia Arquette did the same in her Oscar speech and was applauded by Meryl Streep. Gucci launched an international campaign called “Chime for Change”. There are also the radical feminists of FEMEN, a little less elegant and more provocative than Emma, whose naked breasts are frequently broadcast. And then there are men like Guy-Bernard Cadière and Denis Mukwege, doctors who are dedicated to working against violence towards women.The message is sometimes sent in a clumsy manner, and it’s not always intelligent, but it’s clear: equality of the sexes, everywhere and for everyone.

Having defined the word “feminist” to my friend, he tells me that for him, the term doesn’t cut it. If equality is for everyone, we should be saying “humanist” or “egalitarian”, he retorts. I disagree immediately, still exhilarated by my arguments, I stick with my decision and declare myself a feminist. For all that though, he’s not wrong. Maybe my friend, and many other men, could be much better activists if the term “feminist” didn’t have so many negative connotations. In interviews I’ve read, men have started sentences with “I wouldn’t say I’m a feminist, but I’m for the equality of the sexes…” Guys, with respect, you are indeed feminists. Or egalitarians, if you prefer.

After all, despite the labels used, the cause is the same.