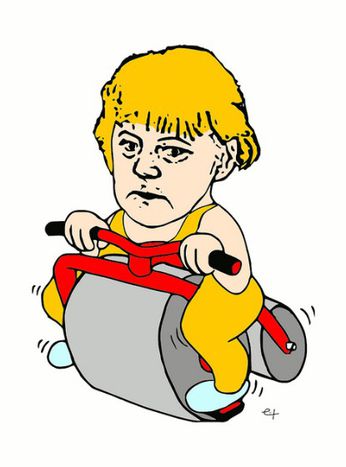 The German chancellor's statements on 16 October have provoked the Slovakian, British, Dutch and Polish media - both immigrants and host societies have to work on integration, or the extreme right will win. Press review

'Immigrants have no sympathy for system' - Sme, Slovakia

German chancellor Angela Merkel's statements about the failure of the multicultural approach are valid not only for Germany but for Europe as a whole, argues Petr Morvay in the liberal daily: 'Multiculti was doomed to failure from the outset because it is based on mistaken beliefs and illusions. Above all because it negated the fundamental cultural differences. Naturally adequate command of the language of a country is a precondition for immigrants getting a decent education and work to feed the family. But ultimately what is more important is what immigrants are talking about and which values they believe in. The problem is not that christian churches and mosques stand side by side in a European city, but what is preached in these houses of god: love for one's neighbours even if they hold different beliefs, or hate. Multiculti is a failure because a number of immigrants have no sympathy for the democratic system, for the freedom of the individual, for equal rights for women and for laws that apply equally to all. A consensus on these common values is however a pre-condition for any kind of multicultural coexistence'

The issue of cohabitation with immigrants must be addressed urgently, writes the left-leaning daily with an eye to events in Germany: 'Some of the immigrants are sought-after qualified workers, others are a burden on the social system. They all bring with them not only rich traditions but also habits that engender distrust. Consequently immigrants are both an advantage and a source of problems. If politicians fail to react to society's fears of immigrants out of a fear of being labelled racist, they're doing the genuine racists a service. With her comment that multiculturalism has failed, Angela Merkel has started a debate that Slovakians must also not avoid, even if we still have little experience with immigrants' (Andrej Matišák)

The liberal daily sees a Europe-wide trend behind German chancellor Angela Merkel's statement that integration has failed in Germany: 'Germany now joins France, Belgium, the Netherlands and - so far, to a lesser extent, Britain - in questioning the multicultural approach adopted by governments for many years. If integration is now to be the focus, however, the effort will have to be two-sided. As well as requiring migrants to do more, governments and the indigenous population will have to try harder, too. This will take funds - for language tuition, better schooling and homes - at a time when money is in very short supply'

Read the full article 'Integration has two sides' on The Independent

'Wise to talk about it' - Trouw, Netherlands

Social values should play a key role in the debate about integration in Germany, the daily writes: 'There is no reason to shy away from debate about integration: how much immigration we want, which conditions immigrants must fulfil and whether there are values that can't be given up. These are questions that can be discussed in an integration debate. Germany can contribute to this ever-growing debate in Europe. A few years ago Germany began a debate about the 'Leitkultur', or 'leading culture'. It touched perhaps on the very core of the problem. Can immigration create a society with completely changed values? Or are there indispensable values that are fixed for everyone who wants to live here? Immigration creates insecurity and therefore it is wise to talk about it'

Despite tougher conditions for immigrants in the US, integration is more successful there than in Germany, writes the daily: 'German schools teach immigrant children about Otto I, Duke of Saxony, but they simply aren't interested because they don't consider him their ancestor in any way. In the US the social services treat immigrants very badly - in Germany by contrast immigrants are treated very well. In America the education is nothing special, and the universities demand fees on top of that. In the US the integration process is brutal, in Germany by contrast it is mild. The result: the Germans have less success with integration than the Americans' (Jan Wróbel)