In his key note speech to the Union of European Federalists last Federal Committee, Andrew Duff MEP urged more attention to be paid to the definition of the common European interest. He said : This is a dangerous moment for Europe when the collective leadership of the European Union is weak and demoralised.

The Council presidency has virtually collapsed; the Commission and Parliament are in transition; and nobody has any idea what constitutional regime will apply to the EU in the future.

So the political parties must not fail -once again- to rise to the big occasion of the European Parliamentary election campaign. If politicians fail to campaign, the European dimension of democracy will be imperceptible and turnout will remain low. 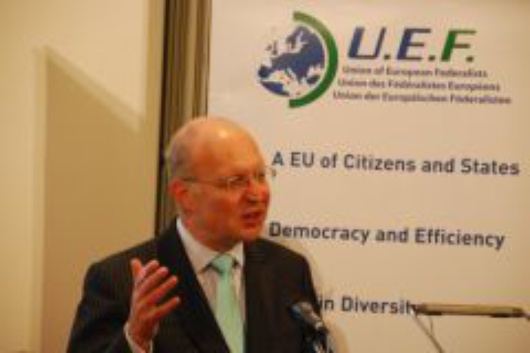 Andrew Duff, who is President of the UEF, told the meeting of the federal committee that the federalist organisation was ready to combat the nationalist forces in the campaign.

Federalists have no reason to be intimidated by the rising tide of ultra-nationalist and europhobic opinion. The financial crisis, the economic crash, the problem of climate change, the international security situation all point to the need for more Europe more concerted leadership, more parliamentary control, and a greater capacity to act on behalf of the EU institutions.

Today, the case for a federal Europe has never been more evident. Nationalism must be defeated. We must get to work to define more clearly the common European interest.