André Rieu: "I think that my orchestra is a little Europe"

André Rieu, the famous Dutch violinist and conductor of the Johan Strauss Orchestra, is always responsible for concerts that gather a tremendous audience. His orchestra never fails to create a vibrant atmosphere beautifully bringing Sostakovich, Ravel, Elvis and Sinatra together. Cafébabel interviews Rieu about his life and works, which highlight a strong personality and a prolific career.

His wide ranging performances cater for all musical tastes, and strive to find a common point transcending multiple cultures. Rieu grew up surrounded with classical music, "My father was a conductor," he explains, "I saw with my own eyes and from my own experience how stiff the whole classical world is, you know? It’s very small. No humour, no laughter, no colours, no light, no show, nothing!"

Through his music, he tried to inject a little more humour into the staid world of classical music. "We're not changing the music. We play it like it should be played," he continues. "When I play Beethoven, it's Beethoven. When I play Bach, it's Bach."

Alongside the music itself, Rieu’s rapport with the audience gives him immense appeal, helped by his desire to break down social barriers – particularly age barriers. He describes his audience as "everybody", and his concerts in America and Australia often bring together individuals from all walks of life. "Here in Europe, because we have more tradition, the older people come because they think that I’m only playing waltzes," he laments, "But when you come to my concerts, you’ll see that it’s not old-fashioned at all! My orchestra is young, so it’s always a lot of fun."

It's true – the smiles of the audience add to the glamour of each skilfully staged performance. Rieu's tours are a cultural experience for both musicians and audience alike; his orchestra effortlessly fits into each musical culture they perform, invoking the deepest feelings one can experience during such an encounter. "When we come on stage ... the audience feels and sees that we are real human beings ... We want to have an interaction with the audience. We want to go off stage after three hours and say 'Phew, that was an evening we will never forget'."

And there are many evenings to remember. From Denmark to Romania, Rieu has sold out shows across the Old Continent. "We know that the audience has the same feeling. They go home and they need two weeks to calm down! That's what we want. And we need a lot of red wine to calm down, because the next day there's another concert!"

A musical melting pot, his orchestra is an example of successful coexistence and a counterpoint to unpleasant moments. With a orchestra made up on 12 different nationalities, and a varied array of cultural influences, Rieu refers to his performers as a "little Europe", with himself in the middle. "They are friends ... they speak together, live together, play music together, have fun together... it could be an example of how things should work." Politically speaking, he is an avid defender of democracy, which he calls "the most beautiful form of government." 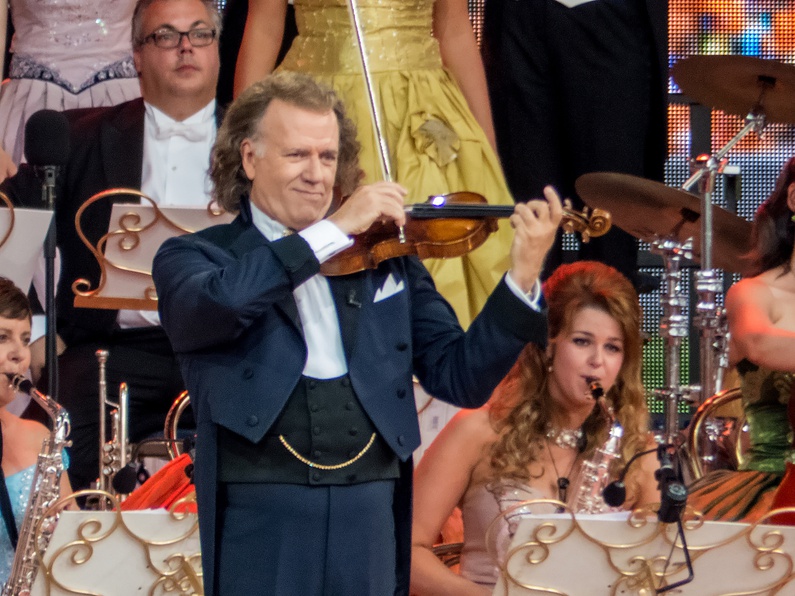 "You know, I’m the conductor of the orchestra. Without a conductor, there’s no democracy," he argues, "When my flute player is performing a solo, and he plays it beautifully but I had another way in my head, if I like it, I let him play. A conductor is not a dictator. And a good leader of a country should be like a conductor, not a dictator."

When it comes to musical influences in his young life, his explains that nobody advised him on his musical career. Instead he took matters into his own hands. "I fell in love with my first violin teacher when I was five. I think that was the best advice." He has a few words of advice for young musicians seeking to follow in his footsteps, "Do what you love. Because the whole world tells you to do something else. But when you don’t love it, don’t do it."

Above all, Andre Rieu is a firm believer in the healing power of music. "Music is always going to help. In every minute of life, all over the world. Music is important in a love affair, or in a catastrophe ... Music goes so deep into your soul, as no other communication tool can do. Imagine ... young people who have instruments but don’t speak each other's language. So here you are! Speak! Speak through your instruments. It works. It’s always going to work!"