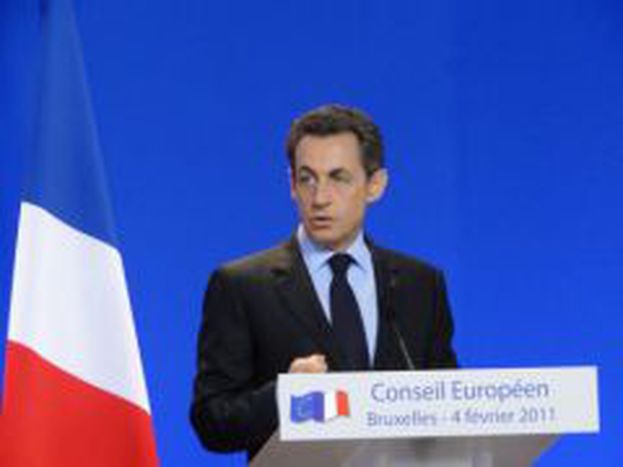 By Angelique Berhault European Summit, February 4, 2011, Brussels: Nicolas Sarkozy gives a press conference where he presents the position of the European Union and France on the situation in Egypt, where he states "The 27 Member States condemn the attacks on press freedom, lend their support to the people and wish for this a transition to occur peacefully". Meanwhile in Cairo ... ...

hundreds of thousands of Egyptians are in the streets for the "Friday of departure." In Tahrir (Liberation) Square, a giant banner displays their demands: the removal of President Hosni Mubarak, the dissolution of Parliament and the establishment of a transitional government.

Back in Brussels, a journalist asked Nicolas Sarkozy if this was the "Friday's of Mubarak's departure?" to which he replied: "I'm not Egyptian, it's not for me to say what I feel about this issue. We leave the Egyptians to decide who should lead the protest movement and how."

When we hear such a response, one wonders why the reaction to Laurent Gbagbo in the Ivory Coast was so different, whom Sarkozy urged "to leave before the end of the week" last December. If French policy really was non-interference at the international level, how could Michele Alliot-Marie suggest to the National Assembly in France to train the Tunisian and Algerian police to maintain order?

Similarly, when Sarkozy says that the Egyptians have the right to determine who should lead the protest movement , we are not fooled. It is clear that the West (or rather their leaders) have no desire to see Mubarak step down. Mubarak and his administration are a strategic pawn in the Middle East, as explained by journalist Alexander Buccianti for RFI, "Protesters in Tahrir Square, who rightly criticize President Mubarak as the agent of the Americans, today do not want the support of Washington, which some see as an attempt to take over their revolution. They do not appreciate U.S. concern for their fate, which allows supporters of Mubarak to deal with traitors to the nation. "And when it is known that Mubarak has been established and supported by the West and supported with billions of dollars by the U.S. administration, one wonders how journalists of the press room in Brussels can remain silent about such hypocrisy.

If it happens that the protest movement in Egypt weakens, we nevertheless guard the memory of the people who braved the fear to try to break free. Isn't democracy just what is going on in Tahrir Square, right at this very moment?