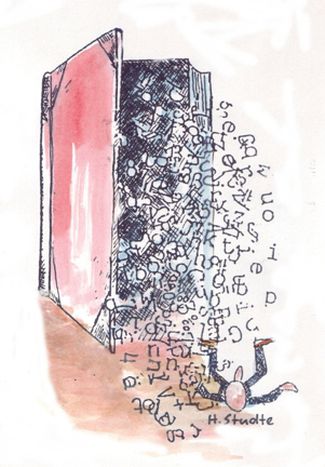 Analyse this, anglicise that

It is relatively easy for Brits to speak a ‘foreign’ tongue, what with the current invasion of English words into other languages. Just have a guess at the necessary verb ending. And voilà - you can ‘chattare’ in Italian, ‘shoppen’ in German, or even ‘downloader’ in French.

It’s not a new phenomenon to incorporate words. Since the beginning of travel, we have been borrowing and loaning words. When the Normans came to England in 1066, Old French words from across the Channel seeped into middle English, which gained over 10,000 Gallicisms by the end of the 13th century. In modern French, many of these words no longer exist, or have different connotations.

Take ‘rendez-vous’ (‘meeting’ in French). In English it takes on the added implication of a meeting of a secret nature. ‘Die Hand’, ‘der Ring’ and ‘der Finger’ originated from the German, and were introduced to the English. But don’t be fooled by ‘Rückseite’. It does not literally mean ‘backside’, but ‘reverse’. Meanwhile, ‘überhören’ conversely means to ‘not hear’ or ‘ignore’, rather than ‘overhear’.

The same goes the other way; where you can jest at your grandfather and call him an ‘old-timer’ in English, in continental countries this is referred to as a make of antique car (Oldtimer). Like ‘downloaden’ or ‘pullover/ pullunder’, it is an example of Denglish or Germish, where words are borrowed between the two languages, albeit when they originate from the same Germanic family.

Throughout history, figures and institutions like Mussolini, the Académie Française and the Verein Deutsche Sprache have attempted to ideologically halt this ‘contamination’ or evolution, but these little ‘germs’ look set to keep on spreading.