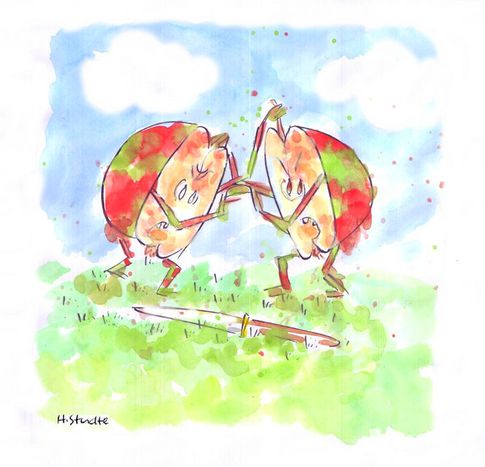 An apple a day

Apples are used in European sayings to express everything from nasty people, looking healthy and causing chaos - weekly idioms with audio

Eating an apple a day keeps the doctor away

). Having the peach (avoir la peche) is another fruity meaning for being on form and having energy. The Spaniards* will compliment you on looking sano como una manzana

(as healthy as an apple). The opposite of that is being as wrinkled as an old apple, as the French say (ridé comme une vieille pomme

). Staying in France, the old wives tale diverted into something of a political slogan for Jacques Chirac's 1995 presidential campaign, of which the apple tree was the symbol: 'mangers des pommes’

('eat apples’ became a nationwide joke (pertinently, his family comes from the apple-producing region of Corrèze).

From health to love and warnings. Jak dwie połówki jabłka (as two halves of an apple), chime the Polish. But check out your other half’s parents; if niedaleko pada jabłko od jabłoni/ the apple doesn't fall far from the tree

and your partner’s parents are bad 'uns, you might know what your relationship will resemble in twenty years time. After all, a rotten apple/ la manzana podrida

(one rotten apple is enough to spoil all the pile). The English cause chaos by upsetting the apple cart

Another option is to make compromises: in den sauren Apfel beißen

(to bite in the acid apple -to bite the bullet in English or jump into the swimming pool/ water in Spanish and French (tirarse a la piscina, se jeter a l’eau). Otherwise you could well have an apple of discord

*Ever 'grabbed the apple, bit into it and threw it away' in the direction of your feet? Cojo la manzana, la muerdo y la tiro

('take the apple, bite into it, and throw it') is apparently one of the first techniques they teach you to dance flamenco in Spain.